Subscribe Now Get The Financial Brand's FREE Email Newsletter
After kicking around the perimeter of banking for several years, interest in virtual reality technology for customer interaction and training is growing. Awareness of the immersive technology and its potential applications has soared with big announcements from Bank of America and Facebook.

Even if you’re not a Facebook fan and think its new name, Meta, is a lousy idea (most commenters agree with you), don’t let that keep you from seriously thinking about the so-called metaverse.

Although Mark Zuckerberg stated during the name-change announcement that Facebook “will effectively transition from … being a social media company to being a metaverse company,” neither Facebook nor Zuckerberg invented the concept of the metaverse. In fact, the virtual world “Second Life” was created in 2003 by Linden Research and is still operating.

But Zuckerberg’s attention has given the metaverse, and the related technologies of virtual and augmented reality, a big boost.

According to an NPR analysis, the metaverse can be described as “the internet brought to life, or at least rendered in 3D… a virtual environment you can go inside of — instead of just looking at on a screen. Essentially, it’s a world of endless, interconnected virtual communities where people can meet, work and play, using virtual reality headsets, augmented reality glasses, smartphone apps or other devices.”

This may sound like something that is still very future-looking, but in an increasingly virtual world, financial institutions should start to be thinking about their place in it — and some already are.

The Metaverse is, at its essence, a virtual, 3D space for people to interact with each other and with businesses.

Notably, Bank of America announced that it will launch virtual reality (VR) training for its employees in nearly 4,300 financial centers nationwide.

The bank says that every financial center in its network will use VR headsets to practice a wide range of skills including: strengthening and deepening relationships with clients, navigating difficult conversations, and listening and responding with empathy.

“Through real-time analytics embedded in this technology,” the bank states, “managers can also identify skill gaps and provide targeted follow-up coaching and personalized guidance to teammates to further improve performance.”

Other banks using VR or augmented reality (AR) in projects include BNP Paribas, which launched a virtual reality app allowing retail banking users to access their account activity and transaction records in a VR environment; Bank of Kuwait, which has utilized VR in the designing of new branches; and Citi, which has explored a program utilizing holographic workstations for financial trading.

Augmented reality enhances the real world by superimposing computer-generated information on top of it in the form of images, text, and other information. AR is used on smartphones, smart displays, glasses, and tablets.

The Virtual Future of the Bank Customer Experience

Probably the most obvious example where the “metaverse” may impact banking is in customer interactions. Many banks already offer video meeting services, and employ interactive teller machines (ITMs), which employ video connectivity and more robust functionality than ATMs. The next logical step in the digital customer experience could be serving customers in virtual realms.

Bankers agree with this expectation. Research by the Digital Banking Report in the fall of 2021 found that almost half of financial services executives polled believe that one out of five consumers will use virtual or augmented reality technology for daily transactions — not just for gaming, in other words. 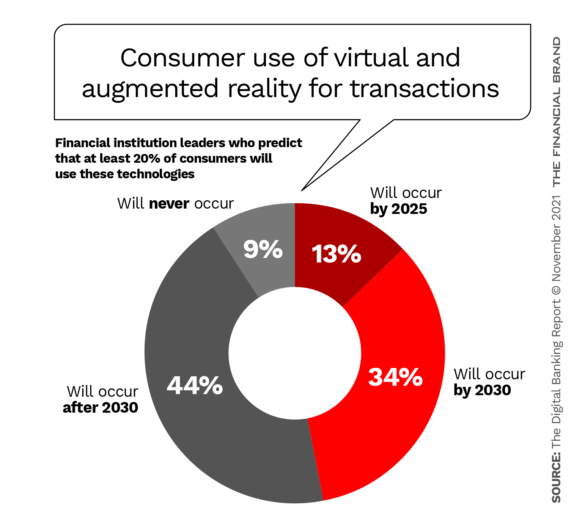 Writing in Medium, IT and security firm Raon notes that a major Korean bank, Kookmin Bank, this year created a “virtual town” on a metaverse platform.

“The virtual financial town consists of three spaces: (1) a Financial and Business Center, (2) a Telecommuting Center, (3) a Playground,” the blog reads. “The financial and business center is composed of branches, public relation and recruitment booths, auditoriums, and social spaces.” As the article explains, the telecommuting center was designed to facilitate communication between telecommuters and office workers, and the playground consists of “resting areas such as parks.”

“The bank has created such a test bed space environment within a metaverse platform with the aim of establishing a ‘Metaverse branch’,” the article continues. The bank implements virtual spaces so that “only avatars that gathered in the same space can have video conversations.”

In the future, customers could do their banking in virtual locations, rather than via branches, websites or apps.

Dharmesh Mistry CEO of fintech firm AskHomey, opines in Fintech Futures that virtual spaces are ideal for customer interaction because they are not limited by physical space.

Trading desk applications are one application, but the technology can be customer-facing as well. “In my previous role, we created a virtual wealth management solution that allowed us to explore how we could create more engaging wealth management dashboards that wouldn’t be limited to a single laptop screen.”

Research and analysis firm IBN Intelligence believes that virtual branches — similar to that of Kookmin Bank, noted above — are the next logical step for how financial institutions can utilize virtual reality and augmented reality in a practical manner.

“As more and more financial service providers are incrementally moving towards digitized banking, the idea of a virtual bank doesn’t seem too far-fetched,” the firm states. “Imagine never having to take a break during working hours and wait in a line at the bank. Now imagine, getting the personalized banking service at the comfort of your home, when it’s convenient for you while enjoying a cup of coffee.”

Use of virtual and augmented reality in banking is just an extension of virtual assistants like Erica, Eno and NOMI.

Such a service could complement already existing virtual forms of customer interaction, and supplement and build upon existing efforts.

“To aid customer demand for contact anytime, financial institutions are already offering services like chatbots and are developing solutions to provide banking solutions exclusively in a VR environment,” IBS Intelligence continues. “This would be a win-win for both — customers will get their service anytime, anywhere and banks will be able to reduce costs as they will not need to invest in physical locations.”

Advantages of Training in a Virtual World

VR and AR doesn’t just mean potential changes for the customer experience, but also how banks train their staff. As noted above, Bank of America is utilizing metaverse concepts and technologies in order to train staff, including using AI-powered conversation simulators that enable enhanced role-playing opportunities, and platform simulators that allow teammates to train in a real-world practice environment on the systems, software and technical tools they use in their day-to-day jobs.

Research and analyst firm Medici notes that virtual on-the-job training is seen as both an implementable and well as a cost-efficient way of upgrading the services bank employees deliver customers.

As of now, banks and financial institutions have only begun to scratch the surface of how these technologies can be used.

“There is no denying that the augmented and virtual reality tech revolution in the financial space has great mileage,” Medici states. Banks and financial institutions have successfully utilized this tech for core solutions and purposes like data analysis, data visualization, accessibility of complex data, and ease of business practices such as virtual team meetings. However, the list is only set to expand multifold as the difference between value creation by organizations who use tech and those who don’t is increasing on a massive scale.”