Subscribe Now Get The Financial Brand's FREE Email Newsletter
Voice assistants are more popular than ever among consumers, but voice-banking uptake overall has been gradual. However, signs point to rising consumer interest in voice-based banking. In-car usage in particular shows promise now that digital car systems and mobile technology are increasingly integrated.

Ever since those now familiar digital assistants Alexa, Siri and Cortana became a part of the everyday lives of millions of consumers, there has been much discussion about how these services will be used in banking. In the early days of “smart speakers,” the hype about voice banking was off the charts.

Despite that, voice banking has only gained adoption in fits and starts, and the majority of bank customers do not yet use it. A 2018 article in The Financial Brand asked, “What Will Jump Start Voice Banking?” In 2022, the question is still valid, yet there are indications of faster growth.

One factor is that the growth trend underlying voice banking has not faltered: U.S. consumers continue to adopt and use voice assistants in larger numbers.

In 2022, 123.5 million adults will use voice assistants at least once per month, according to eMarketer. 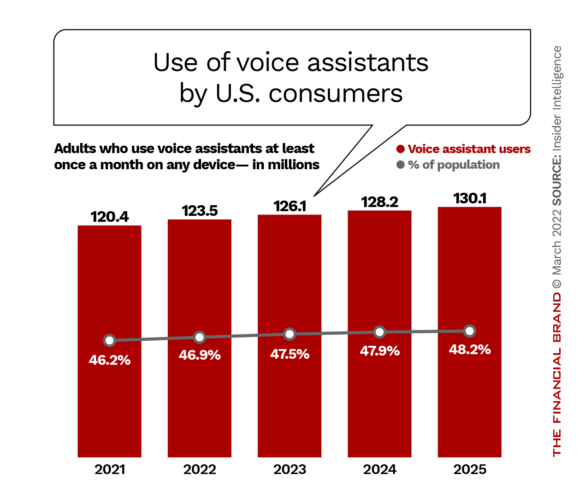 “The number of people using conversational AI tools, such as voice assistants, is growing,” the research firm states. “Adoption will continue to expand among consumers and companies as the AI industry figures out how to address privacy and ethical concerns.”

But within that now three-year-old research there were positive growth signals.

“To start with, the people who are using it are using it a fair amount — about five times per month (median),” Fiserv said. “On top of that, more people report seeing the benefits of voice banking than ever before in this research. In the 2019 survey, 51% of consumers said they saw benefits to voice-activated banking, up from 41% in the 2017 survey.”

There are several more recent indications that voice banking is growing in popularity.

For example, in 2021, 30% of U.S. adults with a bank account checked their account balances using a smart speaker, according to Forrester. While still a minority of the overall banking populace, it represents a significant increase from the 9% figure in Fiserv’s 2019 poll, even allowing for different samples and research methodologies.

“Our research shows that banking customers remain wary of voice assistants,” Forrester acknowledges. “As more banks incorporate voice into their digital experiences and experiment with voice assistants, however, customers are starting to use them more for routine banking tasks.”

U.S. Bank saw the potential and in 2020 launched a voice-based “smart assistant” that works along with its mobile app. The voice function can be used to easily initiate a Zelle split-the-bill payment (“Send Shannon Johnson $20,” as described by the bank), transfer funds between accounts, and more.

There are some unique traits specific to voice banking that could begin to make it more appealing to customers, notes North Carolina-based First Citizens Bank in a blog post.

Voice activated devices can sense irritation in a consumer and connect the person to an agent.

One such trait is added security, since the voice assistant does not store banking data and account-related activities are deleted as soon as the customer logs out of a session. Voice banking also provides customers with a better customer experience, First Citizens argues. “Not only can voice-activated devices provide information quickly and accurately,” the bank writes, “but they can also detect emphasis and intonation, including whether a customer is angry or annoyed. The voice assistant can then connect the customer to an agent for immediate assistance.”

However, First Citizens does point out that some limitations to voice banking remain. While voice recognition technology has gotten better in recent years, it can still lead to confusion and miscommunication in some instances. Furthermore, as a heavily regulated industry, banks also must ensure that they can adequately handle a customer’s personal information in this new environment, something that is “a significant factor in whether a bank even chooses to adopt voice recognition technology.”

One possible reason for the modest adoption of voice banking so far could be its relatively limited scope initially. It’s entirely possible many consumers simply don’t see the value in asking Alexa what their checking account balance is. However, further advancements in voice recognition technology could change this perception.

One example could be voice-based financial services in connected cars. This could involve use of the voice assistant in a customer’s car to pay for gas, to make reservations at restaurants and other similar applications.

“We are moving in the direction where you will be able to interact with your car as you normally would with any other human being,” says Christophe Couvreur, a vice president at voice technology firm Cerence, quoted in PYMNTS.COM. “The car will be smart enough to be like a great assistant to you, like a co-driver that can talk to you, advise you and help you with things.”

Some banks are already experimenting with this new paradigm. TD Ameritrade announced plans for an in-car service where customers can access its network and perform functions such as checking their portfolio performance or getting a stock quote.

“In a connected world like ours, we have to meet investors where they are, whether at home, in the office, or on the go,” said Sunayna Tuteja, Head of Strategic Partnerships and Emerging Technologies at TD Ameritrade, in a press release. “In-vehicle technology offers a new type of connectivity that further breaks down barriers to accessing financial education and markets.”

Ultimately, the future of voice banking will evolve in ways that adapt to the customer’s everyday lifestyle.

“If someone were filling out a loan application on their phone via voice, they might want their voice assistant to remind them about it once they’re back home,” suggests an article by ProcessMaker, a business process automation vendor. “This type of request relies on natural language processing — and that technology is already here.”