Subscribe Now Get The Financial Brand's FREE Email Newsletter
Core systems used by retail financial institutions are sorely overdue for a major upgrade. Many have been nursed along for decades with little more than bandaids, duct tape and some chicken wire. If you're going to compete in the Digital Age, it's time to bite the bullet and get serious about a core conversion.
Subscribe Now!

Research from NTT DATA Consulting reveals that only 4% of banks plan to replace their existing core deposit systems in the next three years. At that pace, it would take 25 years for the entire banking industry to replace all the legacy systems in place today.

The research, which encompassed more than 1,000 U.S. consumers and over 100 institutions, investigated how U.S. banking providers are modernizing the core deposit systems as external threats and evolving expectations continue to challenge the banking industry. In the survey, 70% of banking execs expressed frustration with their current system, saying they do not feel existing tools and processes can adapt quickly enough to change. And everyone in the study said their institution’s core system posed at least one major challenge. 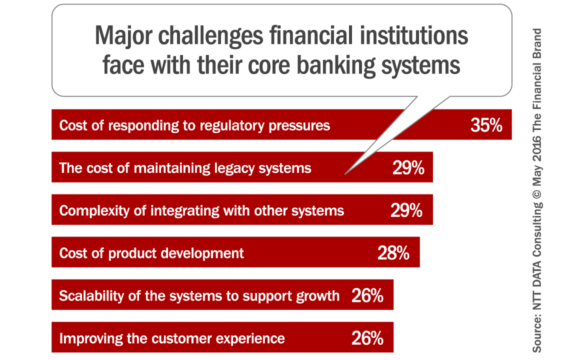 Considering the pace of change in the Digital Age, this is clearly unacceptable. Keep in mind that many core systems were originally developed back in the 80s and 90s. Even if your system is relatively “new” — something within the last decade — there’s a reasonable chance it won’t be built for today’s realities. As a military strategist might phrase it, “You aren’t going to win the next war using weapons and tactics from the last war.”

Peter Olynick, a senior retail banking analyst with NTT DATA Consulting and author of the report, says modernizing core deposit systems should be a top priority for banks. “Banks need to satisfy rising consumer expectations, achieve a myriad of operational efficiencies, and improve their time-to-market for innovation products,” he cautions. “Antiquated legacy systems are hindering banks’ ability to pursue growth opportunities and improve the customer experience.”

Unfortunately, only one in ten banks say they are making the fundamental changes necessary to stay current. It’s not that banks don’t want to modernize. They just struggle to see the way forward, particularly when they are pouring so many resources into sustaining their legacy systems. In the study, 78% of banks’ IT budgets are spent simply on maintaining their legacy core deposit systems. And the cost — both in terms of money and time — isn’t going down. Four out of five institutions say they expect to maintain or increase their investments in their legacy systems. 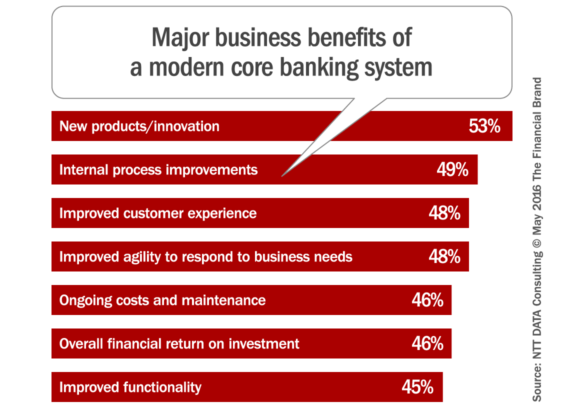 These findings come at a time when customer loyalty to traditional banking providers is teetering on a precipice. 23% of consumers say they would consider leaving their bank or credit union for a more modern alternative. One in three say they would leave their bank simply for a better online and mobile experience. And if a large retailer such as Target or Walmart were to start offering banking services, 47% of U.S. consumers would consider switching.

Why Should Financial Marketers Care About Their Institution’s Core System?

All the themes dominating the financial marketing world today are hampered — in some way — by the challenges created by legacy systems. So many new products and features have been bolted on to these Frankenstein core platforms that it’s nearly impossible to get a “single view of the customer.” Many institutions can’t even tell you how many products their customers hold. How are marketers supposed to “increase depth of wallet” and “grow products-per-household” when they don’t even have a good baseline metric they can measure? How about segmentation? Personalization? Automation? Big data? Not with a core system from 1986.

You could argue that the current state and selection of a future core banking platform isn’t really an area where Marketing has any responsibility. Looking at banking through the traditional lens, an institution’s core backbone is typically the responsibility of Operations and IT. Of course, this is one reason traditional banking providers are struggling (think: silos). In the Digital Age, financial marketers should play a pivotal role in the fate of their institution’s core system. When the time comes for your next core conversion (hint: soon), your C-suite needs to make sure Marketing has a seat at the table, because they have just as much skin in the game as anyone.

It’s this simple: You won’t deliver the type of modern customer experience you need in today’s digitally-driven world, nor can you incorporate any of the contemporary strategies in marketing today until you completely overhaul your core banking system. You won’t survive in the Digital Age using tools from the Stone Age.