Subscribe Now Get The Financial Brand's FREE Email Newsletter
Most financial institutions are already using different technologies to reduce costs and increase efficiency. The real payoff, however, may be in the revenue growth benefits, and the ways automation can improve the customer experience.

As the banking industry is in the midst of massive digital transformation, organizations are increasingly using automation to improve efficiency and reduce costs. While the economics are enticing, the real value of intelligent automation may actually be as a driver of increased revenue growth and enhanced customer satisfaction.

In a study by CapGemini on the benefits and use of automation in financial services, it was found that over a third (35%) of financial services players have seen a 2%–5% increase in top line growth thanks to intelligent automation, including the following uses: 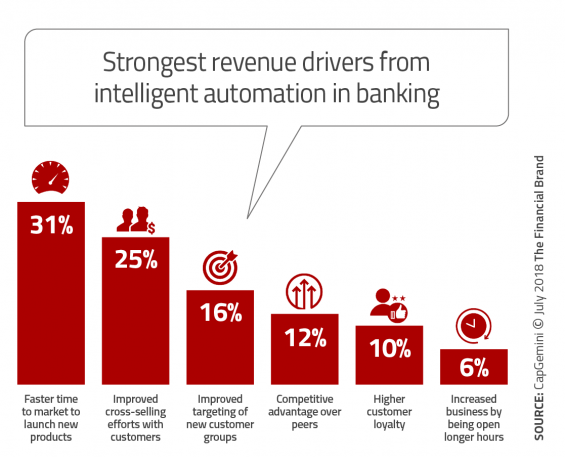 Use of Automation Far From Potential

In addition to reducing costs, improving efficiency and generating additional revenue, the CapGemini study found that 64% of organizations globally had improved customer satisfaction by more than 60% through intelligent automation. As could be expected, many of these improvements in customer satisfaction were the result of efficiencies that positively impacted the customer experience.

The keys to the improved satisfaction included improved response times due to straight-through processing (38%), faster turnaround times for queries by the consumer ((37%), more personalized service (32%), better system availability (31%) and better product development (30%). While the actual numbers related to the direct impact on customer satisfaction could be debated, the reality is that the majority of organizations found a direct impact on satisfaction, which in turn, is known to impact revenues and consumer loyalty. 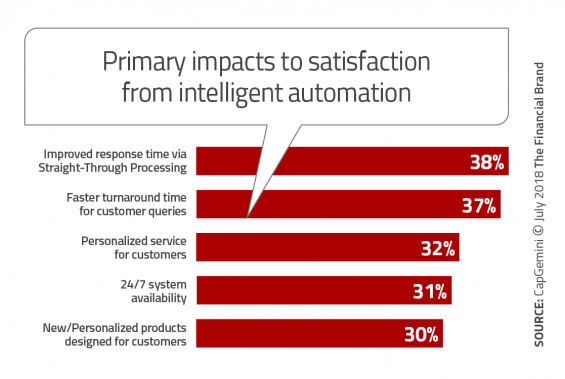 CapGemini also found was that most organizations are still only scratching the surface of potential benefits beyond cost savings. According to the study, “While a large number [of organizations] (69%) have managed to get past pilot stage to deploy at one or two sites, large scale adoption [of intelligent automation] across business processes, functions, or geographies is still elusive.” The study also found that, while close to half of the organizations surveyed had adopted robotic process automation to some degree, only 19% of the organizations had embraced biometric intelligence, with 4% using machine learning. 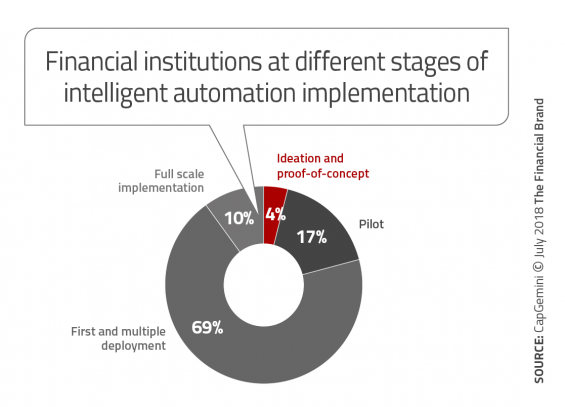 Looking at processes across retail and commercial banks, capital market institutions and insurance firms, CapGemini found that full-scale automation is still rare in any part of the overall business. Not surprisingly, the payments area of a retail bank was the furthest along, consistent with the studies done by the Digital Banking Report. For the business units of financial services, roughly one in ten have achieved full-scale intelligent automation implementation. 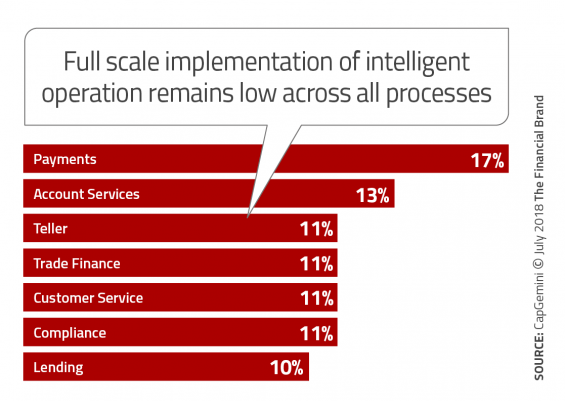 According to the research done by CapGemini, there are two areas where financial organizations’ efforts fall short:

In the evaluation of approximately 50 use cases for intelligent automation, it was found that more than half of the organizations surveyed focused on use cases that were difficult to solve and having a slower than average payback period. It was believed that these efforts may have been better spent on ‘low-hanging fruit,’ where the value of the solution may have been lower but the implementation was far easier. Beyond simplicity, these use cases (automated processes, account servicing automation, business intelligence, reporting, etc.) provide the financial justification to invest in more complex solutions down the road.

Some of the business issues included the lack of coordination between business units (49% mentioned), lack of building a business case for implementation (43%), and the lack of leadership commitment. The technology challenges included challenges with legacy systems, concerns around security and privacy, and a lack of a defined method of handling data across the organization.

Success with Automation Not Just for the Big Banks

It is easy for organizations to quickly dismiss new technologies or opportunities to leverage advanced analytics and intelligent automation by saying, “That’s only for the big players.” Actually, nothing could be further from the truth. In more cases than not, what is separating the success from less successful organizations comes down to two things:

Unlike innovations of years past, cost is much less of an inhibitor because most solutions are scalable to any sized organization. Instead, the ability to move forward is determined by the leadership of an organization and the prioritization of automation initiatives. It was found that those organizations that had taken 50% or more automation use cases from pilot to scale achieved significant value as opposed to the organizations who had taken on much less. This takes vision and internal commitment to results.

The second major key to success is to focus first on the lowest hanging fruit. This means to commit to the initiatives that are not too complex and where the payback is the fastest. Success of these initiatives not only will support additional funding, but also helps in the development of more complex, longer payback solutions.

Finally, organizations must build solutions that extend beyond just delivering cost savings benefits. In today’s highly competitive marketplace the consumer is the final judge of success, determining where they want to do their banking based on simplicity, speed, and the ability to improve their quality of life. In return, they will consolidate their business and be willing to tell others to do the same.