Subscribe Now Get The Financial Brand's FREE Email Newsletter
Half of all retail financial institutions say that their greatest opportunity to increase profitably lies in two main areas: improving customer experience and branch transformation. But they’ll be spending the most money on IT and cybersecurity.

In an annual study fielded by CSI examining banking providers’ strategic priorities, customer profitability and increasing fee income are hot buttons. To help accomplish these goals, financial institutions say they will be pouring money into IT and cybersecurity. The research also reveals that when it comes to improving the customer experience, digital initiatives are a major area of focus. 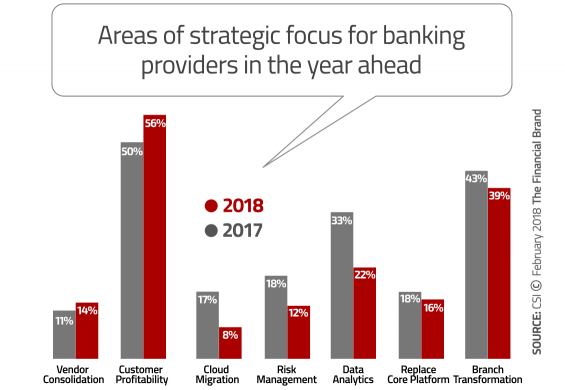 The area getting much less, but still significant, focus is big data and business intelligence. Big data was the buzzword a few years ago, and many financial institutions implemented business intelligence solutions. It seems unlikely with the scads of data siloed at the typical bank or credit union that institutions have completed their strategic data initiatives, but they may be pushing these aside somewhat so they can shift focus on the strategy du jour: customer experience.

IT and cybersecurity top the list of areas that will see increased spending in the next 12 months, quite a bit more than the amount that bankers plan to spend on customer experience initiatives that can make them money. Banking executives predict that spending on cybersecurity will be just slightly more than last year, but there’s a big jump from last year in the amounts they plan to invest in IT. 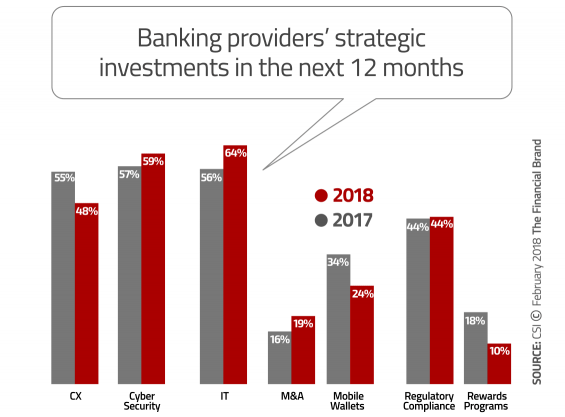 According to David Albertazzi, a Senior Analyst with the Aite Group, spending on customer experience — even if it’s dropped 7% year-over-year — is still a good thing.

“The only true differentiator today is customer experience, and that’s where financial institutions have to compete,” says Albertazzi.

Where The Opportunities Are

Senior-level banking executives say that their greatest opportunity is to grow fee-based income and revenues. They also see growth opportunities in reaching new consumers through omnichannel, something Albertazzi also believes is a good bet.

“Omnichannel will allow financial institutions to reach younger generations as well as underbanked and unbanked consumers,” he explains. 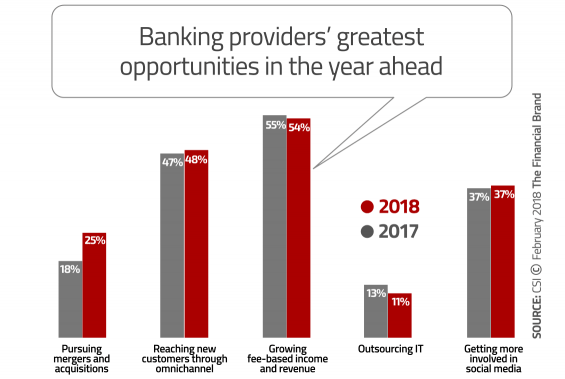 One-quarter of bankers say that mergers and acquisitions are an opportunity. While that percentage may be quite a bit less than those who point to growing fee-based income and omnichannel as areas of opportunity, the focus on pursuing M&A has risen pretty dramatically. In 2016, only 8% of bankers saw M&A as an opportunity, spiking sharply upward to 25% in 2018.

When asked if they expect fintechs offering services such as mobile payments, mobile wallets or virtual banks to wreak havoc on their profitability, only one in five (19%) bankers now view fintech as a threat, down from 29% in 2016. The majority believe that having fintech providers as partners will actually help them generate more profits, not less. 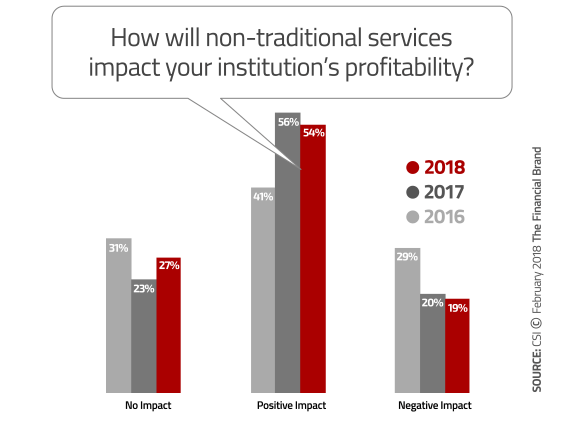 “Fintechs are good at creating customer experiences and they are more agile,” says Albertazzi. “At the same time, banking providers have the customer base fintechs want, and they’re good with compliance and regulation. And they have the bank charters. So we’re seeing both types of players being complementary to each other.”

Improving the customer experience ranks up there as a top spending priority for bankers. To get there, they’ll pursue are digital banking, followed by omnichannel initiatives, and customer service. What’s not getting the love is social media. 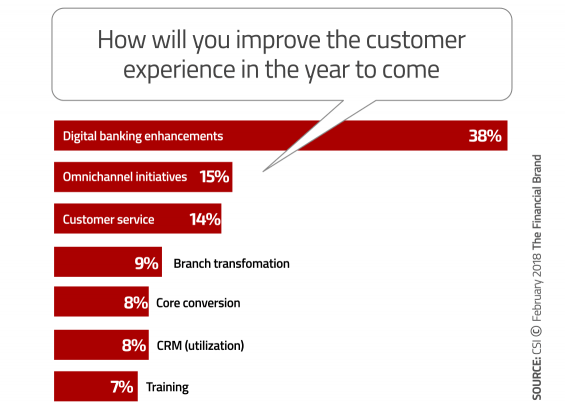 Financial institutions understand that digital has become the primary channel of many consumers, so it’s logical that they would focus on delivering a better digital experience.

“It makes a lot of sense that digital banking is at the top of the list, especially for community financial institions,” says Albertazzi. “They are looking at bridging any feature or functionality gaps that they have within their digital banking offerings, and that’s providing that more consistent experience and advanced functionality.”

In getting to omnichannel, bankers are investing in a number of areas. The top are customer relationship management (CRM) and the ability to open and fund accounts online.

Albertazzi says that the focus on online account opening is smart: “It’s all about providing a consistent experience between channels, so if a customer starts a transaction in one channel, he or she can complete it in another.”

Albertazzi also believes that self-service kiosks and interactive ATMs are an important part of offering an omnichannel experience, but these solutions are expensive to implement and it takes time to roll them out.

What Could Go Wrong?

The biggest challenge for bankers is driving growth and profitability. It makes sense that so many bankers find it a challenge, since the financial industry is changing — both massively and rapidly.

In 2018, CSI predicts bankers will look toward fee-based growth from credit and debit card fees as well as charges for deposits, transactions, wire transfers, monthly services and overdrafts. 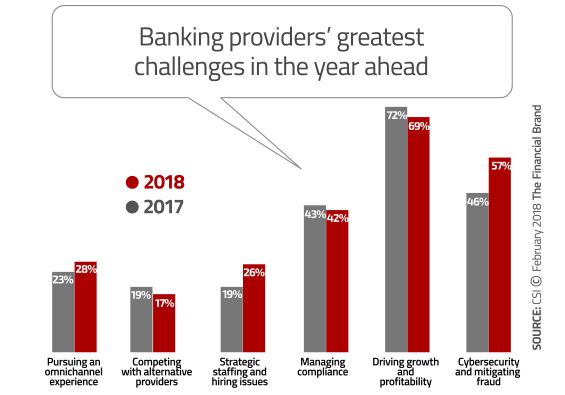