Subscribe Now Get The Financial Brand's FREE Email Newsletter
Retail financial institutions have grossly underestimated the technological changes necessary to thrive in a digitally dominated world. According to Celent, an international financial research and consulting firm, a significant majority of banks and credit unions are ill prepared for the tech upheaval being thrust upon them.

It’s not all doom and gloom on retail banking’s technology front. Celent says North America’s banking industry seems to be waking up to the new technological challenges it faces today. In a report on tech trends affecting financial institutions, Bob Meara, Senior Analyst with Celent’s Banking Group, says more and more banks and credit unions are heading down the right road.

“It may be a journey and not a destination,” Meara says. “A growing number of financial institutions at least have their bags packed and are ready for the trip.”

The comparison between banks and credit unions is stark, with just 24% of credit unions ranking the branch channel #1 compared to 40% of banks. Conversely, credit unions rank the online channel comparatively more important — 46% versus 29% among banks. Similarly, large differences are seen in the mobile and call center channels. 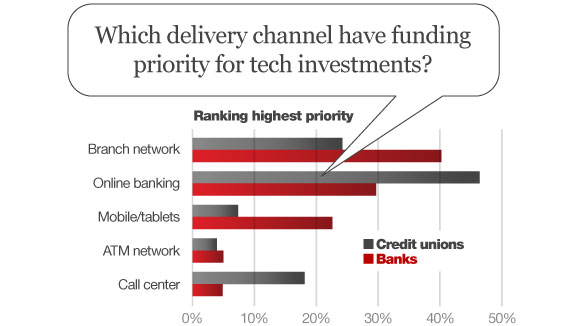 For the first time ever, the majority of financial institutions now view online channel as strategically more important than the branches. Even though It took nearly two decades for this role reversal to occur, it still reflects a dramatic shift in thinking. 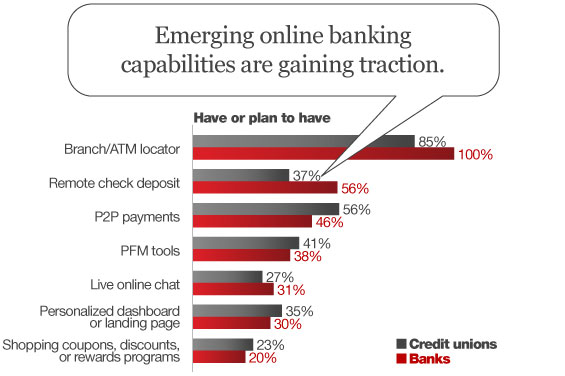 Online account opening and loan origination systems are becoming more popular, for good reason. When integrated with online, branch, and call center channels, customers may start the process online and finish with a quick chat or call session originated online.

Modernizing Branches… One Step at a Time

For branches, the status quo is unsustainable — a fact slowly sinking in to North American financial institutions. Nearly one in five banks plan say they are very likely to reduce the number of operational branches they maintain, but only 7% of credit unions plan to cut back on branches.

Over the past three years, Celent has seen a noticeable increase in technology investments intended to improve the in-branch sales and service experience, specifically CRM platforms, customer analytics, and campaign management systems.

Skip ahead to 2012. Now roughly one in three retail financial institutions intend to redesign branches to support a sales/service model, with plans to introduce new concepts such as teller pods. 48% of credit unions say they are very likely to deploy self-service technologies in branches to cut costs through reduced headcounts, although only 29% of banks say they are very likely to pursue the same strategy.

Financial institutions still aren’t sure if video banking in branches make any sense, with two in five banks and credit unions saying they have no plans to deploy video conferencing technology in branches.

Reality Check: Deploying new branch technologies does absolutely no good if you don’t affect the operational, cultural, sale and staffing changes that come along with them.

Two years ago, the bulk of branch channel technology spending had been check imaging. With those projects largely completed, banks have focused on eliminating other forms of paperwork. In 2010, 22% of banks and 47% of credit unions surveyed had automated deposit account origination systems. In the 2012 survey, adoption grew to 28% and 52% respectively.

The more digital banking becomes, the less important branches are.

Online banking took nearly a decade to mature, but mobile banking took only a third that time to gain widespread adoption. That’s why retail financial institutions are investing in more robust online and mobile platforms, with 38% of large banks currently offering a tablet experience and another 46% indicating specific plans to do so.

Fielding and maintaining a competitive mobile channel is a high priority toward achieving retail banking strategic objectives among 81% of banks and 93% of credit unions surveyed. 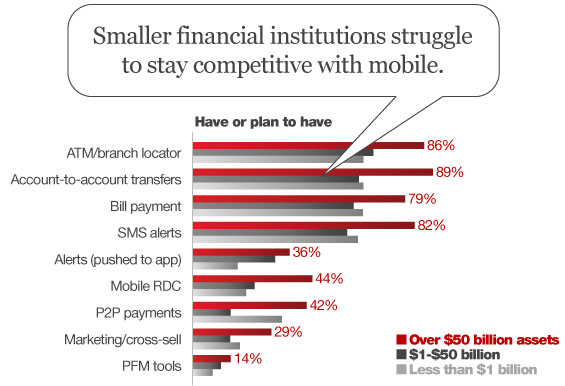 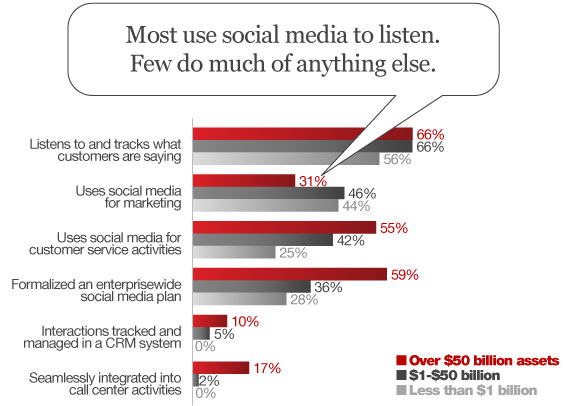 Among all the retail banking technologies covered in the report, Celent says social media is the least strategically important.

“While most financial institutions may be ‘active’ in social media in some way,” Meara notes, “they lack a clear strategy and objectives.”

Meara says social media is not (yet) viewed as a respectable customer engagement channel. Instead, for most financial institutions, it remains a curious marketing and at best, voice of the customer medium.

Problems at the Core

Many financial institutions — particularly smaller banks and credit unions — are severely limited by the core DB systems they run. You can have grand plans and good intentions to transform your banking experience, but an aging core system presents a major roadblock. Many banks and credit unions are way overdue for a new technology platform. Yes a core conversion is a massive headache and no one has a taste for it, but Celent says it’s time to bite the bullet or risk getting left behind.

Things may be changing, albeit slowly. The number of banks indicating they were somewhat- or highly likely to replace/refresh core system over the next 3-5 years jumped from 17% in 2010 to 24%. Credit unions responded similarly, nearly doubling from 13% to 24%.

About the Full Report

The 66-page report, “Emerging Technologies in Retail Banking: The Long Road to Customer Centricity,” contains 76 figures and three tables. The report draws upon interviews among financial institutions and solution providers as well as a survey administered among 132 North American financial institutions during May and June 2012.

The report begins with an analysis of strategic priorities in retail banking, the changing role of distribution channels, and the importance of technology in realizing key priorities. The report also examines current and future trends in branch, online, mobile and social media channels.

Celent asserts that the reports’ comparisons are meaningful and statistically significant, but not necessarily representative of the overall North American retail banking marketplace. Celent believes the survey’s small sample size meant the adoption of certain technologies were overstated in several places, however they regard the information as valuable indicators of industry trends.