Subscribe Now Get The Financial Brand's FREE Email Newsletter
ATM fees can cost consumers a lot of money — a $100 withdrawal can cost anywhere between 3% to 6% in transaction fees. Clearly, it pays for those switching banks to find a new institution with more convenient ATM locations.
Subscribe Now!

In a December 2014 survey on FindABetterBank, over 2,300 consumers actively shopping for checking accounts shared their motivations for switching and provided insights into their banking behavior. 59% of respondents indicated that they use ATMs at least once a week, and 52% said they use other banks’ ATMs at least 30% of the time.

For many of these shoppers, using foreign (non-bank) ATMs carry high transaction fees. Most institutions charge $2 to $3 per withdrawal when non-customers use their ATMs and their own banks also charge up to a $3 surcharge fee as well. These shoppers can look for two solutions: Choose a bank or credit union with more convenient ATM locations or an institution that provides ATM-fee relief features like rebates or access to large surcharge-free ATM networks.

The survey results show shoppers are more likely to say they’re motivated to switch because of high fees than inconvenient ATM locations. 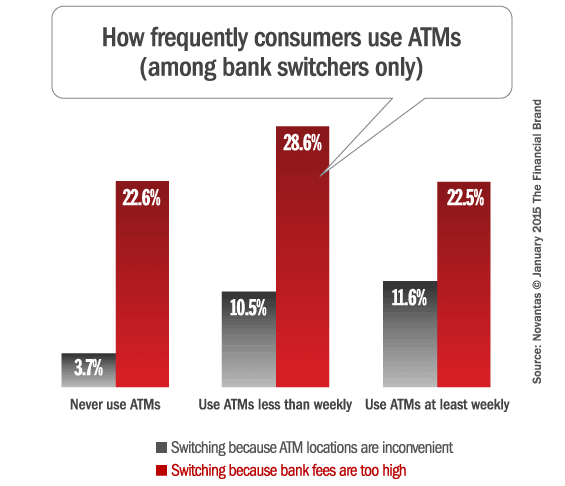