Subscribe Now Get The Financial Brand's FREE Email Newsletter
As financial institutions race to implement artificial intelligence solutions, there is the potential to miss less robust applications that the consumer expects today, while also slowing the development of more sophisticated AI solutions for the future.

By Perry Price, CEO and President of Revation Systems

When The Jetsons premiered in 1962, the notion of a robot maid was considered an imaginative dream about a futuristic life as opposed to something that might actually happen within the viewer’s lifetime. That same year, the U.S. was heavily focused on the space race to the moon, still more than six years away from the historic Apollo 11 landing. More than 50 years ago, the world began to dream in terms previously unimaginable.

As a result, some of the Jetson generation traded their Saturday morning bowls of sugary cereal for mechanical and software engineering degrees — and in just 56 years, have created a world their parents might have argued was impossible. While the common U.S. household may not have a Rosie yet, consumer robots and artificial intelligence (AI) have never been more commonplace than they are today.

The Origin of the Customer Service Robot 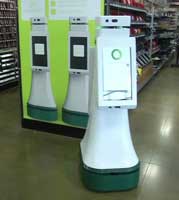 In 2014, Orchard Supply Hardware (OSH) installed its first OSHbot retail service robots in San Jose, Calif. The OSHbot greeted customers and helped them identify, locate or hold items while moving through the store, responding in both English and Spanish, so its human counterparts could focus on more complex tasks.

Similarly, Savioke’s autonomous room service robot, Relay, has been in operation since 2016 in various locations throughout the San Francisco Bay Area. Alongside this commercialization of autonomous robots are digital voice devices like Amazon’s Echo and Apple’s HomePod, which have brought AI into the living rooms of America with a newfound familiarity.

As AI and digital voice devices become more entrenched in the everyday consumer experience, debates among developers continue about the role of consciousness and emotions (like those depicted by Joaquin Phoenix in ‘Her’), as well as more doomsday-like scenarios (i.e. the movie “Transcendence”).

But in terms of AI’s future potential, are those the main questions we should be asking? Perhaps in part. Though they largely overlook the fact that automating needs differ based on industry.

As organizations race to make AI as realistic in sound and response as possible, one could argue those human features aren’t necessary to the evolution of automating customer services and interactions in every field — and it might not be what consumers ultimately want.

In January 2018, the National Institute of Standards and Technology (NIST) unveiled its superconducting switch, which it described as a mechanical version of the human synapse responsible for connecting brain cells. Likening the tech to a new type of AI, NIST’s switch will enable computers to “boost perception and decision-making” for applications such as self-driving cars and cancer diagnoses.

While AI systems with roles such as these certainly do need the highest critical-thinking capabilities possible, these applications are just a margin of the widespread AI future. As every industry seeks to leverage AI for streamlining operations, saving costs and increasing customer satisfaction through quicker response rates, many organizations just need a simple way to leverage AI in order to compete with the latest innovations.

As healthcare and banking digitally transform, there seems to be a hesitation around leveraging AI technology unless it meets the Turing Test. However, the speed of transformation and the expectations of the public for always-available services, need the help of automation now — not 20 years from now, or even 5 years from now. Banking is a good example.

While healthcare patients may certainly want an AI system with good bedside manner — after all, that field can involve some difficult conversations — banking consumers are not looking for the same level of human-like interaction or sensitivity. Where healthcare is a highly emotive space, made up of personal comfort levels and preferences, banking is largely transaction-based and relatively constant based on each demographic segment. Yet even in healthcare, non-humanistic AI is helping nurses spend more time where it truly matters (i.e. with patients) by allowing them to step away from the appointment scheduling process, unless absolutely necessary.

This is why it’s so important for each field to individually assess how and where AI fits into their ongoing digital transformation — long before it’s sophisticated enough to rival human contact. Because the expectation for speed and availability is already there, if AI as an automation tool is ignored in the short-term, it risks stunting the long-term evolution of those industries.

For example, communicating with a financial institution in order to proceed with various types of transactions doesn’t require an AI-based messaging system that could level a peace treaty — it just needs to be able to interact and make recommendations or transfers based on the customer’s immediate need.

And those needs remain largely the same regardless of demographic. A middle-aged customer in Wichita, Kan., for example, who owns a farm and is married with three kids uses the local bank for basically the same purposes as a young, single professional living in New York City. Banking, by-and-large, is made up of the same types of interactions regardless of who or where you are: withdrawals, deposits and transfers. In these interactions, speed and simplicity across channels is the objective.

This is important, because in many cases, the branch is competing with consumer-driven digital applications, leveraging peer-to-peer, mobile payment services such as Venmo to transfer funds directly to friends and family without going through a branch or even a traditional financial institution. AI is not a one-size-fits-all solution, but it also can’t be ignored in its simpler forms.

With AI, The ‘KISS’ Principle Applies

It’s time to debunk the myth that human-like AI is the only answer to the ultra-connected world of tomorrow, because it could risk holding back the banking industry if it refuses to implement it in more simplistic forms. While the increasing role of AI, mobility, and the way consumers interact with their own data will continue to evolve consumer expectations, human-like AI won’t — and doesn’t need to — have a place in every component of a business. Sometimes, it makes sense to just ‘keep it simple.’

It’s time to start asking where AI solutions are the most valuable, and what level of advanced learning is needed to satisfy the majority of consumers. Over-engineering can lead to slower progression of basic applications than the consumer expects, while limiting the development of the most advanced applications in the future.

This webinar will cover how you can expand your service footprint exponentially—and without having to hire any new staff.