Subscribe Now Get The Financial Brand's FREE Email Newsletter
Once described as a fad, talk about bank innovation labs has lapsed. But many of these units are quietly coming up with new financial solutions and helping to nurture fintech startups. Here is what several new, and existing, labs are up to in banking.

Financial institutions of all shapes and sizes in today’s world are judged by their ability to innovate. Even ten years ago, the banking game was fairly straightforward. Now, however, the industry demands creative thinking and big(ger) picture ideas.

To make their job easier, many banks and credit unions are playing the partnership game, recruiting the fintechs that already walk the technology talk to build their back-end and front-end systems. Some of the best mobile apps and websites are not designed by a financial institution’s tech team anymore — they use pre-built or customized APIs from an outside company.

On the other hand, there are other institutions which continue to invest in their financial innovation labs. Granted these labs aren’t gaining the same attention they used to in years past — in fact, in some circles, they’re considered a dying trend. To be sure, there was a fad element to the launch of some bank labs. However, many of these innovation hubs are still churning out products or helping startups to build the latest fintech technologies.

In 2021, many innovation labs look different than in years past. Some emerge from the likes of mega-companies, like Amazon, many from large banks across the globe and still others working quietly in the background at smaller institutions, trying to address the pain points and unnecessary friction consumers complain about. Here’s what some of the innovation labs The Financial Brand noticed are doing:

You could say Amazon in the past decade has been in its “prime” when it comes to innovation. Not only has the retail and technology giant mastered e-commerce and in-person commerce, but it has also broken into the financial industry and is fueling the fintech movement.

In late May 2021, for example, Amazon Payment Services launched its latest fintech innovation lab in Dubai, the chic, ultramodern city in the United Arab Emirates. The new lab is a hub for the disruptive neobanks vying for space in the industry. Its focus is to find new ways to innovate digital payments.

The digital payments space has enormous potential for growth. The transactional value of the global digital payments market was $5.44 trillion in 2020, according to ResearchandMarkets.com, and that’s only expected to increase. The research company expects it to hit $11.29 trillion by 2026.

Dubai is a perfect site for a payments lab. More than three out of every five consumers in the UAE expect their country to be cashless in the next several years, according to a Standard Chartered poll. The Arab country has been a key market for a wave of new fintechs and digital-only neobanks, many of which have payment-driven strategies.

Executives organizing Amazon’s innovation lab say that the new lab in Dubai, situated in the Dubai Future District, will “organize workshops for start-ups and other organizations in different industries such as e-commerce, insurance and travel to understand any payment issues they face,” The National reports. Amazon says it will also partner with other payment technology software companies, such as Visa and Mastercard.

At the other end of the size spectrum, Liberty Bank of Middletown, based in central Connecticut, doesn’t have a traditional innovation lab. As a community bank, it’s difficult to jumpstart its own technology center. Instead, in August 2021 it joined Alloy Labs, a consortium of community financial institutions across the United States looking to infuse money into the fintech industry.

CEO Jason Henrichs is at the helm of Alloy Labs, which works with nearly 50 small- and mid-sized banks across the country. He says that community institutions like the ones he works with are at a disadvantage against larger financial institutions that have the resources to back leading technologies. 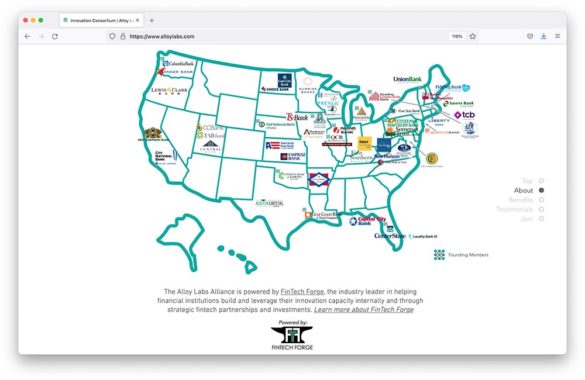 “Smaller banks haven’t raised hundreds of millions of dollars in venture capital to fund fintech development and they don’t have the balance sheet, tech teams and incubators like larger players do,” Henrichs says.

The core focus of Alloy Labs coming out of the Covid-19 pandemic, Henrichs explains, is to invest in “artificial intelligence-based automation and embedded financial experiences,” in order to keep up with challenger banks that are mobile first.

“When we get to the third wave — business model transformation — we’re going to see some very interesting things,” he maintains.

Every innovation lab is different, but financial institutions of all sizes can find ways to invest in the latest financial technologies.

2020 turned out to be an interesting year for Citi’s Innovation Labs, which shifted from in-person labs in Dublin, London, New York, Singapore and Tel Aviv to completely virtual settings. However, despite the setback, the labs in 2020 “facilitated more than 950 startup meetings and introductions across 35 markets,” according to GFMag.

To show off Citi’s skills with technology, the bank designed a website for its innovation lab, which features a 360-degree virtual building with rooms showing details about the lab’s new initiatives. 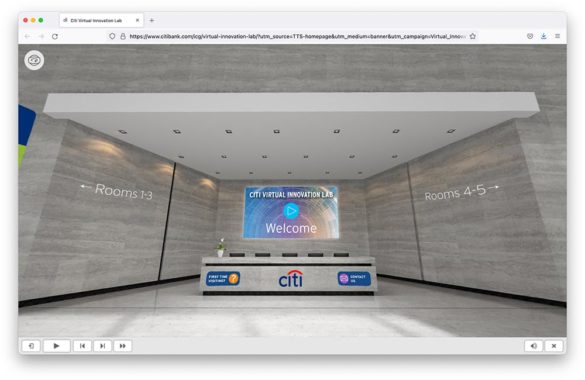 The first two “rooms” feature a welcome video and a “Meet the Team” set-up. The third room dives into the emerging technologies the bank is investing in while the fourth and fifth rooms are dedicated to Citi’s current fintech partnerships and a showcase of how it innovates on a global level.

2021 so far has also been a productive year for the bank’s innovation lab. Citi most recently tag-teamed with Inter-American Development Bank (IDB) to help initiate cross-border payments between people in the U.S. and Latin American and Caribbean countries, via blockchain and tokenized money, according to IBS Intelligence.

(Tokenization, in this context, refers to the dispersion of blockchain “tokens” which represent assets that can be traded.)

Simplified, the system works as IDB deposits funds in dollar amounts into a Citi account, where they are held, tokenized and transferred with digital wallet technologies. Then, the funds can be converted to a local currency as determined by Citi’s exchange rate.

Morgan Stanley doesn’t invest only in fintechs in its innovation lab. The lab is designed to foster technology companies of all different kinds. Its Summer 2021 cohort had eight companies, two of which were finance-based start-ups: Cognicor and Lifesaver.

What’s unique about Morgan Stanley’s innovation lab is its multicultural component. The bank ran a survey in 2018, which found that investors “reported capitalizing multicultural and women-owned businesses at 80% less than businesses overall.” As part of the company’s Multicultural Client Strategy Group program, the lab is designed to promote financial inclusion by providing tech startups with access to investors and tools.

Innovation labs can certainly have a theme. What sets Morgan Stanley’s lab apart is its inclusion strategy as it seeks out multicultural technology companies to invest in.

Cognicor is a digital assistant platform for financial institutions, backed with artificial intelligence software. Lifesaver builds universal mobile banking apps for banks and credit unions that don’t have the budgets or know-how to design them.

The co-head of the program, Alice Vilma, says the admission into Morgan Stanley’s lab is “harder than getting accepted to Harvard.” Once admitted, the companies enter into a five-month program, which dives into managing finance and sales strategy, marketing and branding, according to the program’s website. At the end of the five months, the companies showcase their products to investors and customers on what Morgan Stanley calls their “Demo Day.”

This was the program’s fourth year, and Morgan Stanley’s innovation lab now boasts an alumni of 51 companies with valuations that exceed $450 million.

An early entrant into the innovation lab world, Wells Fargo offers a similar program to Morgan Stanley’s, but spends more time dedicated to its fintech partners. It’s program also runs a month longer — six months. It offers a similar suite of services and opportunities, including eligibility to receive up to $1 million in funding.

Wells Fargo’s lab, now in its seventh year, claims 29 companies in its portfolio to date. This year, the megabank’s program was completely virtual.

In November 2020, Wells tagged two additional fintechs for its program — Extend and Oliver. Extend is a digital payments infrastructure software that banks and credit unions can use to upgrade their card products. The fintech’s products include aggregated virtual card APIs and a tokenization service.

Oliver is a legal servicing platform that enables all parties in financial transactions to collaborate on products and adhere to compliance guidelines.