Subscribe Now Get The Financial Brand's FREE Email Newsletter
Much of what's going on in the Metaverse may appear strange to banking eyes, but Accenture thinks it will be a crucial place to be in less than a decade. Here's why it's time for your bank to take it seriously.

Mike Abbott is a big proponent of banking’s future in the Metaverse. And yet he is simultaneously a voice of caution.

“I’ve never seen such FOMO — fear of missing out — before in the industry,” says Abbott, Senior Managing Director and Global Banking Lead at Accenture. “Everyone wants to claim that they were the first in the Metaverse with this, that and the other thing.”

It’s human to want to be first, but Abbott insists that letting FOMO be your guide is bad strategy. In fact, it’s no strategy at all.

“Do you remember what institution was the first to issue a debit card?” asks Abbott in an interview with The Financial Brand. “Probably not, because it doesn’t matter.”

A handful of pioneers in financial services have launched sites that amount to planting their flag in Metaverse territory in one of the various virtual worlds that comprise this space. Some are little more than animated “brochure-ware,” while others are more ambitious.

“The most important thing for banks to do is to form a Metaverse strategy that aligns with your brand and your purpose. Just being there for the sake of being there is not a strategy.”

Abbott says some of the Metaverse development work by banks has yet to go live. For example, some banking players are working on ways to enable customers to meet for financial advice with staff as avatars in the Metaverse. Other institutions are experimenting with customer education. In addition, some are exploring how to provide immersive experiences through mobile channels (versus through headsets or on a desktop).

Why bother about this often strange new world? Abbott is quite blunt on that score:

“In solving digital, banks have become functionally correct and emotionally devoid,” he says.

Here’s what he means by that: “The industry pushes people through website pages all day long. But in the process of becoming digital, banks lost humanity, the ability to connect with people. The Metaverse ultimately holds the promise of putting humanity back into banking, to enable bankers and customers to have conversations again.”

What Are Bankers Controlling in the Metaverse?

Some bankers and credit union executives might, at this point, ask for a time out: “Hang on, I’m not even sure what the Metaverse is and you say I have to have a strategy.”

Abbott acknowledges the question marks and even some of the jibes people make about the Metaverse, which he believes is still in its earliest days. And its terminology continues to be fluid. Some call Web3, or Web 3.0, the Metaverse. Others don’t agree.

“This is how we solved the problem at our firm. We call it a continuum,” says Abbott. “The Metaverse, to me, has to have a few key properties to qualify for that definition.”

First, he says, it has to be a virtual place where multiple parties, often many or even just two, can co-exist and interact, or act independently.

Second, as implied by the first point, “it has to have people, a population, because without that there’s nothing to it.” (Even if the people represent themselves as flamboyant avatars.)

Third, beyond being a place, it must have the element of property, which Abbott defines as the ability to own things there, whether it be actual Metaverse “land” or “goods.”

Fourth, participation should include “portability.” Abbott explains that this means the ability to move items and value around the Metaverse, rather than either being part of a closed system.

This list is an ideal at this point, something to aim for. 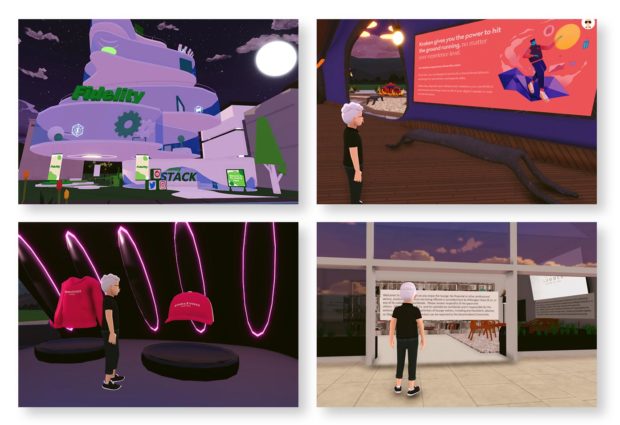 A sampling of financial sites on Decentraland (clockwise): Fidelity’s “The Stack,” where the emphasis is on education; Kraken, the crypto exchange and bank, which includes billboards and a video of one of its founders; J.P.Morgan Chase, which sponsors the Onyx Lounge, which currently focuses on the bank’s summer employee reading list and which features a disclosure at the entrance; and Winklevoss Capital, owners of multiple crypto and other financial firms.

“Some aspects of the Metaverse are still the Wild West. The question of who is going to create the rules is in many ways no different from for society,” says Abbott.

Thinking back on the evolution of the internet in its earliest days, Abbott says, helps illustrate the challenge. Different means of reaching the internet and more importantly various browsers and related tools had to be sorted out. The Metaverse, which exists on multiple, unconnected systems right now, remains at that unresolved stage.

Much of this is philosophical and fundamental. A separate matter is technology.

Abbott says an apt comparison of where the Metaverse stands is Apple’s Newton, a personal digital assistant of the 1990s. In some ways it foreshadowed later devices, but a huge amount of work had to be done before the newer devices became practical and hit the market in 2007 as the iPhone. What banking companies do on the Metaverse right now will likely be surpassed, but today’s steps must be taken to lead to more useful applications, Abbott suggests.

Smaller financial institutions may think that this is a game only larger banks can try, but Abbott disagrees. He is unable to discuss specific clients, but he says Accenture actively works with smaller banks on Metaverse strategies.

“Some of the smallest banks are exploring the Metaverse already and we’ve seen some of the largest banks ignoring it at the moment,” says Abbott.

“This is a case where bank size doesn’t matter,” Abbott continues. “It’s more a matter of focus and will.” Much of the fundamental structure has been established already by the companies creating it.

“It’s been democratized,” says Abbott. “It’s open source, out there for free for many people to get at it.” Where hardware has to be procured, it is typically the consumer who buys goggles and such.

There are straightforward tools available that institutions can use. One example Abbott gives is Microsoft’s AltspaceVR. Users can create spaces and invite people to enter them.

“Any community bank could do that tomorrow,” says Abbott. 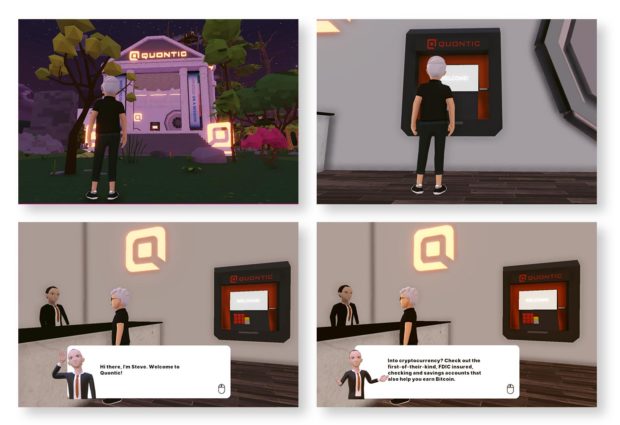 Approaching the Quontic Bank branch in Decentraland, clockwise, the view at “night”; approaching an ATM, which unlocks the vault door, leading to a dance party in the back yard; and a sample of the conversation between your avatar and the branch’s teller, “Steve.”

Abbott doubts that people who don’t want to bank in the Metaverse will be left behind.

“Channels never die,” he says. “They just fade away.” Even as mobile has come to dominate transactional banking, many people still use websites, drive-through ATMs and branches.

Abbott suggests that banking companies could play a part in the taming of the Wild West of the Metaverse. Much of the rudimentary monetization and payments in it lack means of assuring ownership and transfer. Abbott says this is a natural role for banking. (He also notes that many tie the future of cryptocurrency and the Metaverse together. However, he doesn’t believe this will necessarily be the case.)

“Somebody is going to have to be the trusted person for this,” he explains. He says digital identities are going to be more important as real transactions take place more frequently in the Metaverse. He believes banks could play a key role in helping to ensure that people in the Metaverse are who they say they are.

Along with increasing participation by banking institutions, regulation will come along in time.

“Personally, I believe banks will want that,” says Abbott, “because without regulations they won’t know if the Metaverse is something they should or shouldn’t invest in.”

What’s the Timeline for Banks to Enter the Metaverse?

As banks venture into the Metaverse, Abbott says the logical place for an institution to begin weighing how it chooses to do so is at the board level. That’s where many engagements begin for his firm.

How soon will financial institutions have to be in position for doing business? Abbott believes the adoption curve of earlier technologies, like the web and mobile, gives a clue.

“It’s probably five-plus years before you start seeing real scale in it,” says Abbott. “You will start seeing some pretty big, interesting things emerging at that point in time.”