Subscribe Now Get The Financial Brand's FREE Email Newsletter
One has opened a massive financial innovation center researching everything from product enhancements to advanced concepts like quantum computing. The other put its innovation lab right into a working branch, so it can easily test fresh ideas.

Is financial innovation a state of mind or a place? Does innovation depend on face-to-face interaction or, in the wake of the work-from-home explosion, can good ideas come from a Zoom call?

Ultimately, bank innovation takes a blend of both.

“Innovation isn’t 100% focused on being in the same physical room, because we can leverage different technologies to expand the footprint to teammates in other locations,” says Ken Meyer, CIO for Consumer Technology and Innovation at Truist. “But there really isn’t a substitute for human interaction.”

Providing a venue for live interaction can take many forms. Truist and TD Bank, both among the top ten banks in the U.S., have taken radically different approaches to establishing innovation centers.

On the other hand, TD Bank around the same point introduced its first “test and learn” facility, the TD Workshop, in Philadelphia’s University City locale. The Workshop is integrated into the bank’s branch in that neighborhood, which will serve as a living lab for changes in equipment, floor plan, products and more as the Workshop comes up with new ideas.

Both of these approaches will make extensive use of live consumer input to see how banking customers like the ideas the banks’ teams come up with.

In an interview with The Financial Brand, Meyer explains that the Truist’s innovation development effort has three distinct horizons.

“We’ve got to able to run multiple plays at a time,” explains Meyer. The three horizons are:

1. Products Truist offers today. Improving on what’s already on the bank’s menu is a priority, in order to produce a better customer experience. This will include on-site research and focus groups with consumers to get their feedback, as well as a working contact center right in the bank’s innovation facility. The contact center will permit direct observation of what factors in existing products work and where serious pain points exist. Engineers, designers and product chiefs will gain an immediate understanding by working elbow-to-elbow with contact center staff.

2. Products Truist may offer tomorrow. Many of the resident innovators and developers will be focused on research and testing to develop future products and services.

3. Long-term issues that may or may not involve a future Truist product. Quantum computing is one example of technologies that Truist will look at now, to prepare the bank for the time when nascent tools and methodologies become possible and practical. While any given new tech may not have an implementation date or precise purpose for Truist at the moment, “we want to make sure that we have our finger on the pulse of what’s going on and that we’re learning on the way.” Meyer believes keeping up will be key to being able to adopt new tech quickly.

“We need to be able to be positioned with the ability to pull the trigger quickly and get something to market with speed,” Meyer explains.

Meyer says that in planning what facilities the innovation center should offer and what it should look like he considered fintech labs he’d seen that didn’t hit the mark.

“When you look at many of these spaces, they aren’t really so much innovation labs as they are just agile workspaces,” says Meyer. “Often they feature open floor plans and a couple of conference rooms. Then they call it a day.”

“We’ve given a lot of thought to every square foot here,” Meyers continues. While there are open spaces for casual conversations and formal rooms with whiteboards, the center also contains dedicated spaces for special purposes. 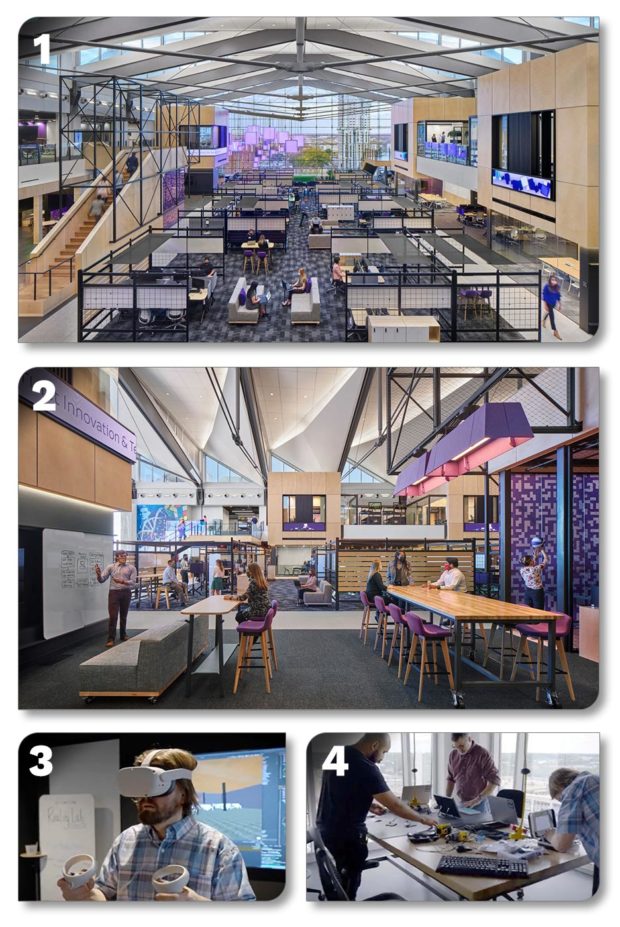 Here is an abbreviated tour, with the text below tying in with the numbered photos above:

1. An overlook shows how the center features both open areas and more private spaces in multiple tiers. All the way in the back of the photo is an interior park provided for casual discussions and recharging people.

3. The bank’s “Reality Lab” provides dedicated space for experimentation with augmented reality and virtual reality tools that would be used in such applications as banking in the metaverse.

4. By contrast, the center’s “Makers Space” is where developers can craft physical gadgets for tests. This work will use modern tools like 3D printing as well as traditional tools for fabricating prototypes.

These areas are used by center staff as well as visiting staff and guests invited to take part in specific projects.

A special feature of the center are three “Innovators in Residence” offices. The concept for these is to bring leading-edge companies to the center to participate in projects and share ideas with Truist staff. The initial three companies are Amazon Web Services, Verizon and Unqork.

The latter specializes in development of low-code and no-code programming, which Meyer says may prove critical to bringing innovative ideas to customers quickly. This is especially important when they are first tried out.

“If we’re going to test and learn about new experiences, then we need to be able to create new front-end experiences and new user interfaces quickly, without having to do all that development work,” says Meyer.

The innovation center’s permanent staff includes developers, product managers and designers who came aboard when Truist acquired Long Game, maker of a gamified finance mobile app. Also adding to the expertise in the center will be visiting representatives of fintechs that Truist Ventures, the bank’s venture capital subsidiary, has invested in.

Philadelphia’s University City district makes a good spot for testing new products, banking software and new technology, according to Steve Turley, Head of Consumer Distribution Strategy, Planning, and Innovation at TD Bank. University City is a diverse area, and is so-named because it is dominated by higher education institutions, among them the University of Pennsylvania and Drexel University. This market is also close to TD Bank’s U.S. headquarters in Cherry Hill, N.J.

The bank remodeled its existing University City branch to enable it to make quick changes in format and layout. This is designed to accommodate tests driven by the TD Workshop innovation lab.

“We wanted the ability to test and iterate in a live store environment,” explains Turley. (TD refers to its branches as stores.) The original branch had around 6,000 square feet of space, much more than a retail office requires given modern banking practices and traffic.

“So we transformed it into a place where we could innovate and provide space for meetings with the community,” says Turley. Community outreach will be a major goal of the Workshop.

Going forward store staff will work closely with TD Workshop staff, talking customers through new features and products that are being tested there. The lab itself is under the day-to-day management of Colleen Duke, Lab Manager.

Among the layout principles that TD will be testing in the store will be the formats that consumers prefer for having consultative meetings with TD bankers. One section of the newly converted store’s present layout consists of seating reminiscent of a coffee shop, featuring banks of couches with facing chairs across tables. 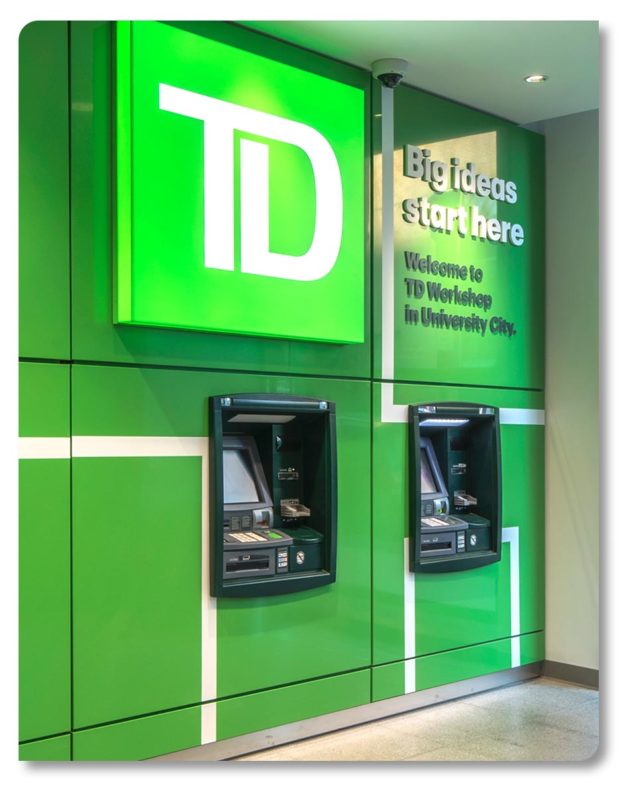 The first thing visitors will see is the store’s ATM vestibule, where new programming and potentially new equipment will be tested as needed. Signage just above the ATM stations states, “Big ideas start here. Welcome to TD Workshop in University City.”

“This approach is going to enable us to get customer feedback in a 24/7 environment,” says Turley. Having Workshop staff onsite will make it possible to make rapid tweaks.

Over time, says Turley, the bank may expand the TD Workshop idea to other cities, to be able to compare findings in multiple markets.