We know the ideas that will shape the future of Commonwealth Bank won’t come from us, they’ll come from you.”

Commonwealth Bank in Australia is inviting regular everyday people to submit, discuss and vote on ideas that improve the banking experience. Through a web portal dubbed IdeaBank, Commonwealth has essentially established a new R&D department, one that turns the bank’s customers into an army of brainstormers, beta-testers and budding inventors.

The bank will award the creator of one of the most popular ideas with a $10,000 prize in March 2012. The winner will be determined by a combination of votes from the bank’s customers and its leadership team.

Commonwealth is hoping to drum up more ideas along the lines of Kaching, a mobile app that lets people make P2P payments via email, Facebook and wireless phone number.

Key Question: How will customers feel when their ideas are not implemented? 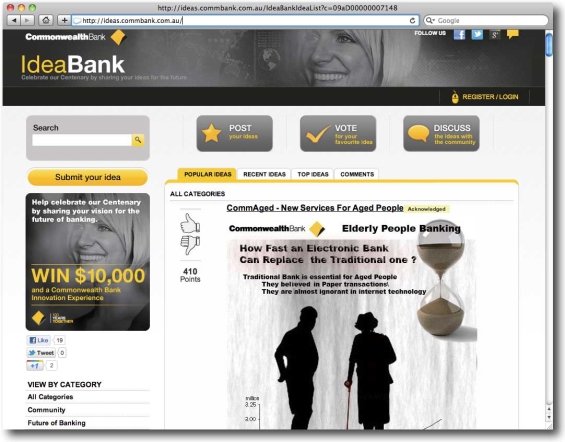 “Never before have our customer been so empowered to both contribute and vote for innovations and improvements,” said Andy Lark, Chief Marketing & Online Officer with Commonwealth Bank.

Lark believes Commonwealth’s size (they have over 10 million customers) will play a factor in the success of the IdeaBank social media experiment.

“More than half of our customers are online, and millions are using our mobile applications,” Lark told ZDNet in an interview. “They’ve shown a lot of appetite for technology and we want to harness that interest.”

“It’s only natural that we continue to invest in this channel to differentiate our brand,” Lark added.

Does Lark feel awkward handing over control of his bank’s innovations to the masses, as if maybe the bank has run out of its own ideas?

“It’s a bit self-deprecating,” he admitted.

Once Commonwealth has selected an idea for implementation, the bank will invite feedback and discussion at the My NetBank Labs portal during a beta-testing phase.

Christophe Langlois, an international authority on social media in banking, is optimistic about Commonwealth’s IdeaBank. “This initiative has a good shot at changing the banking industry’s perception towards social media and transparency,” Langlois wrote on his Visible Banking blog.

Commonwealth isn’t the first bank to try crowdsourcing ideas for products and services. Danske Bank in Denmark has its Idebank and First Direct in the UK runs its lab.