Looking for a way to communicate with teens and young adults, Bucks First Federal Credit Union launched Project Flipside, The Alternative to Doing Nothing in the spring of 2009. The program, which targets 16-25 year-old students, focuses on promoting financial literacy as well as the dual checking/savings Flipside Account. Three representatives from local high schools and colleges were enlisted to form the Flipside Crew, a group of evangelists meant to promote Project Flipside at schools, events and online for a period of one year.

The search for a new Flipside Crew started on February 1, kicking off with a huge dodgeball tournament at a local college. Schools and teachers are also involved with promoting the search.

The three new members selected for the Flipside Crew will be expected to contribute multiple blogs and video posts to the Project Flipside website and attend special events hosted by Bucks First. Crew members have no hourly requirements, but spend about 15-20 hours per week blogging and attending events. In exchange, members of the Crew get a free vehicle to drive to events, an Apple MacBook,a digital video camera, a regular digital camera, and a Flip. Project Flipside is essentially the same formula as the popular Young & Free Gen-Y spokesperson promotion, only Bucks First is using three spokespeople instead of one.

Content on Project Flipside microsite is largely generated by the Flipside Crew, and includes blog posts on financial and non-financial topics, YouTube videos, an events calendar and contests. The site explains common banking products in very basic terms and provides resource links to more information. The site also promotes the Flipside Account, but it is not the focus. 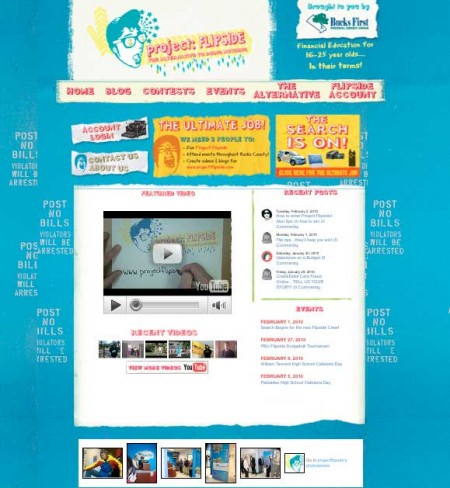 Along with the microsite, Project Flipside incorporates social media components including Facebook, Flickr and MySpace pages. Hilary Reed, VP of Marketing at Bucks First, says the credit union is discussing whether it should shutter its inactive MySpace page and open a Twitter account instead.

“New account openings have largely been a result of the actual footwork and community efforts by the Flipside Crew.”
— Hilary Reed, VP of Marketing

Project Flipside is as much a traditional “grassroots” marketing effort as it is a social media initiative. The program includes speaking engagements, in-school financial literacy classes and student-oriented events like skateboard contests, mall concerts and even a dunk-tank competition. (Bucks First was originally formed by local teachers, so it’s easy for the credit union to get special access to schools through the school district.)

In November, Bucks First extended the program to include its first in-school branch at a local high school. Two more are in the works, both creatively based around Project Flipside. Also in development is a Flipside debit card retail program, which would give cardholders a discount at participating retailers.

Bucks First FCU says that about 5% of its new members in 2009 came from Project Flipside.

“You don’t need an agency to do this.”
— Hilary Reed, VP of Marketing

“It’s tough to show the return on investment,” Reed said in an interview with CUNA’s News Now. “But the key is to convince boards that the results show for themselves.”

Project Flipside combines different types of word of mouth marketing, including social media, event marketing and grassroots marketing, proving that there are many other ways to effectively reach Gen-Y, despite all the attention on social media.

While the online components have generated some awareness, it’s really the footwork by the Flipside Crew — including campus appearances, events and speeches — that has led to new account openings and other tangible results.

Project Flipside could benefit from an overall, comprehensive social media strategy specifying the role each tool would play and what content it would provide, reducing workload and the risk of redundant efforts/content.