Subscribe Now Get The Financial Brand's FREE Email Newsletter
To respond to increasing demands from consumers and to combat the threat from financial industry entrants such as Google, Apple, Facebook and hundreds of smaller firms, more financial institutions than ever are increasing their investment in innovation. 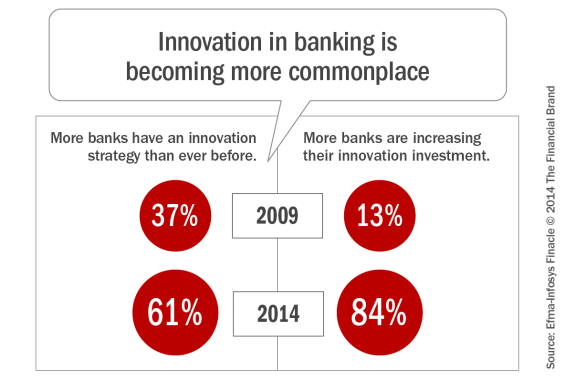 These shifts reflect a change in market economic conditions, a realization of the importance of innovation in banking, the perceived threat from technology firms and the fast growth of banking innovation in developing countries. It also reflects the heightened demands of digital consumers, who are doing more of their banking through mobile channels.

In an exclusive interview with The Financial Brand, Patrick Desmarès, Secretary General at Efma said, “This year’s study reflects steady progress rather than big change. More banks worldwide have an innovation strategy and have increased innovation investment. This is especially true in developing countries.”

Regarding the focus of the investment, Desmarès said, “Banks believe they are becoming more innovative. Digital channels (and particularly mobile) is still the main focus. We have also noticed many more banks investing in start-ups or working with start-ups through innovation accelerators as well.”

Some of the other highlights of the study include:

As discussed above, one of the most obvious trends is that more banks than ever have an innovation strategy. Efma and Infosys define a strategy as having clear objectives, processes and metrics to guide innovation. As shown below, only 37 percent of banks worldwide had an innovation strategy in 2009, but in 2014, the number has increased to 61 percent.

While investment in innovation has increased, one area for potential improvement is the measurement of overall success of innovation. According to the study, only 31 percent of banks indicated they they measured the overall impact of their innovation efforts. 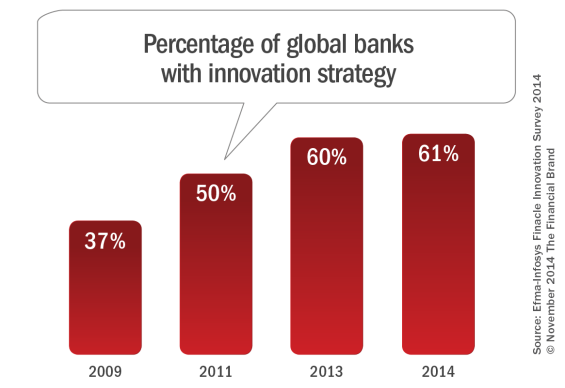 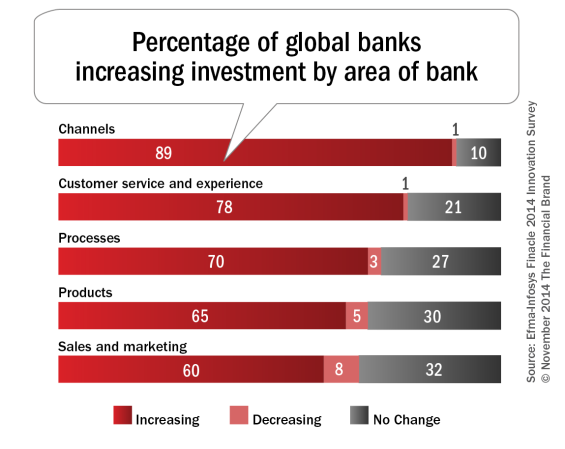 The survey found a significant divergence in the overall innovation objectives being set by banks worldwide. While 49 percent indicated a desire to be an ‘innovation leader’, 38 percent were comfortable being a ‘fast follower’, with 11 percent admitting to an objective of being a ‘follower’.

“The fast follower strategy is sensible in many cases, because being a leader carries more risks and can be more expensive,” mentioned the report. “The relatively slow adoption of innovations in financial services also means that a fast follower strategy may not carry much risk of being at a competitive disadvantage.” 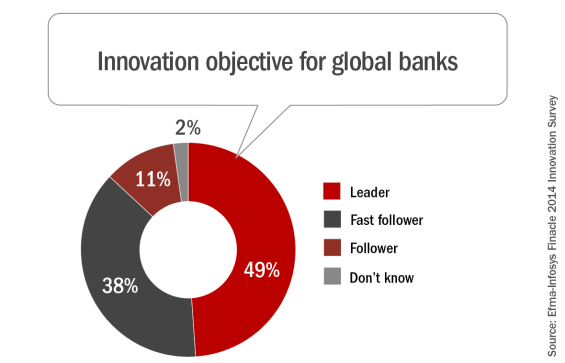 Finally, the report found that a great deal of innovations in the banking industry tend to be more ‘incremental’ than ‘disruptive’. There are many reasons for this phenomenon, not the least of which is the culture within banking.

This ‘fear of failure’ mentality is also reflected by the low level of investment in R&D. According to the study, only 35 percent of banks worldwide said they con dust any form of R&D investment. Many firms indicated that they relied on suppliers and partners to stay relevant with the rapidly changing demands of consumers.

Working counter to these hesitancies is the continued perceived threat from non-banking organizations. Large numbers of start-ups and companies from different industries continue to have the banking industry in their cross-hairs. In fact, financial technology venture capital investment is at an all time high. 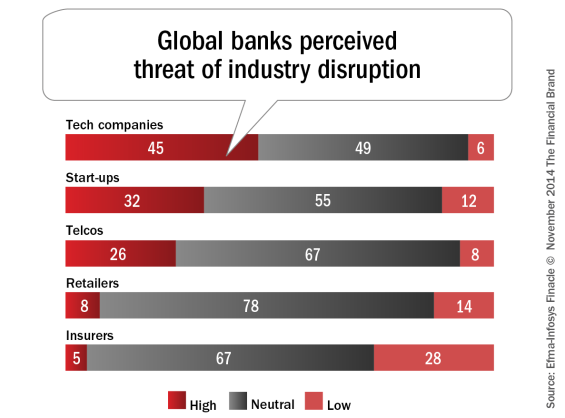 This year’s study found that many financial institutions organized their innovation activities around specific themes. As can be expected, ‘Mobility’ was found to be the most important theme for banks, with 88 percent of firms rating the importance as ‘high’. The themes of ‘Big Data’ and ‘Social Channels’ were the next two most important themes.

Mobility innovation was found to include much more than just developing a mobile banking application. It included an expanded view of mobile banking such as voice biometrics, digital money management, location-based services and wearable banking (to a significantly lower degree). 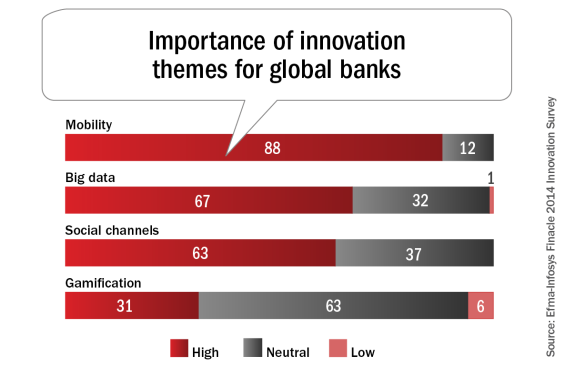 In the theme of Big Data, the scope on innovation ranged from risk management to the selling of services on a more personalized level. According to the research, 54 percent of banks were investing in Big Data projects with an additional 35 percent exploring investment in this theme. In other words, virtually all banks will soon have Big Data projects underway.

Finally, within the theme of Social Channels, virtually all of the banks surveyed have some form of social media initiative under way. In the vast majority of cases, this involves the use of social media as a listening tool and to provide an additional customer care channel.

The integration of social media as a marketing tool to acquire and sell services to current customers is far less pervasive. Even where social channels are used to either sell or deliver services, the efforts are continuing to evolve.

The majority of banks (63%) have dedicated resources to innovation, either in a centralized department or distributed within business units. The optimal configuration is dependent on a number of factors, including the size of the organization, the current organization structure, the innovation strategies being pursued, etc.

Regardless of the structure, it has been found that it is best to have dedicated staff assigned to the efforts. It has also been found that a strong innovation communication structure will facilitate better results.

Some of the innovation processes recommended include formal idea generation, idea screening, prototyping and a staging of investment. Overall, more than 40 percent of banks are not using one or more of these processes, which was thought to be a weakness.

Given the expense and risk associated with innovation in banking, many of the banks interviewed for this study indicated a greater willingness to embrace both open innovation and even partnering with a current supplier (done 80% of the time). While increasing in importance, investing in start-ups is still more of an exception than a rule.

“The evidence (from other industries) is that ‘open innovation’ can improve innovation performance for large companies, mentioned  Patrick Desmarès from Efma in our interview. “One aspect of that is working with an ecosystem of smaller players, either through investment or partnerships.”

As mentioned earlier, there is still a culture gap that conflicts with the process of innovation. Building these bridges with suppliers, outside firms and developers can help ease the strain.

According to the report, “Ultimately, any innovation has to be of benefit to consumers and it is important for banks to focus on services which can improve the value proposition.” Progress is definitely being made, but it is a game of playing ‘catch-up’ for most banks of all sizes.

Interestingly, some of the most exciting innovations are coming from developing countries, where formal banking systems are comparably new. This is reflected in retail banking innovation award winners announced by Efma and Accenture over the past few years, which were dominated by financial organizations in counties like Poland, India, Turkey, etc.