Subscribe Now Get The Financial Brand's FREE Email Newsletter
Three-quarters of banks and credit unions say they are increasing innovation spending. Customer experience had been the top goal, but more of the innovation budget is now moving to back-office operations and business model changes to support digital transformation. Three factors are key to successful innovation: strategy, partnerships, and a dedicated team.

Banks and credit unions are doubling down on bank innovation, with more than three-quarters expected to increase investments in the next 12 months. As many institutions have made noticeable progress on customer experience in the past two years, they are now focusing more of their innovation efforts on areas like back-office operations, business models and banking products.

Banking leaders have moved away from using customer satisfaction as the primary measure of innovation success. “There is now a greater understanding that innovation resources need to be also spent on internal systems that can’t be measured by customer satisfaction,” according to “The Innovation Evolution,” a report by American Banker. The banking world has changed in a little over two years, and leaders have responded by adjusting their innovation strategies.

Three-quarters of banking executives say they plan to increase their innovation investments, with 41% noting an increase of 10% or more.

To succeed and make the most of their innovation initiatives, banks and credit unions must identify their most valuable areas, create a strategic roadmap and establish a team and center of excellence to manage it, the report states.

Innovation Spending Up the Most at Smaller Institutions

Three-quarters of respondents plan to increase their innovation spending over the next year, with 41% noting an increase of 10% or more. That estimate is based on the input from 177 financial institution executives.

The report suggests that the pandemic may have affected credit unions more than other institutions because of branch closures and restrictions or because they are more vulnerable to fintech or digital-only bank competition.

During the pandemic, many banks and credit unions had no choice but to turn to rapid innovation, creating entirely new financial solutions to engage customers digitally in almost all product lines across the customer lifecycle. Many are likely to continue innovating, as 64% of institutions said the pandemic positively impacted their innovation strategies, according to research by the Digital Banking Report. 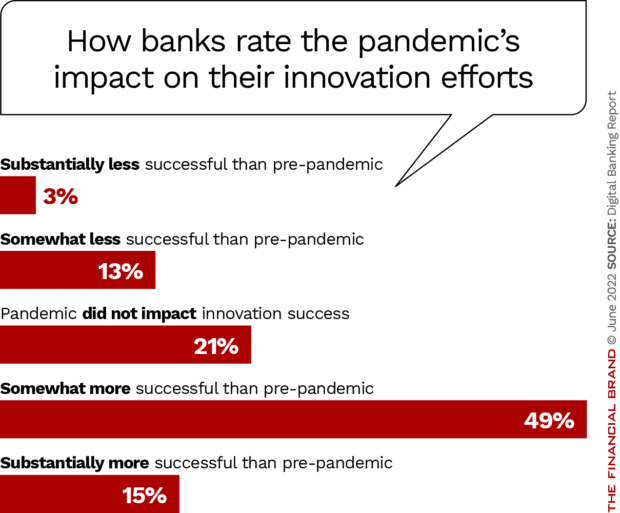 As the pressure for rapid innovation has waned, however, most banks and credit unions now take more time and focus investments on existing markets where they see the greatest opportunity and least risk.

While innovation related to customer experience is still strong, many institutions are increasing their investments in back-end systems and infrastructure, according to the American Banker report. In fact, investment in CX-related innovation has notably decreased. More than 90% of banks and credit unions say they have succeeded in advancing their CX goals over the past two years, so many are dialing back their CX focus to give more attention to innovating back-end systems, business models, operations and products. 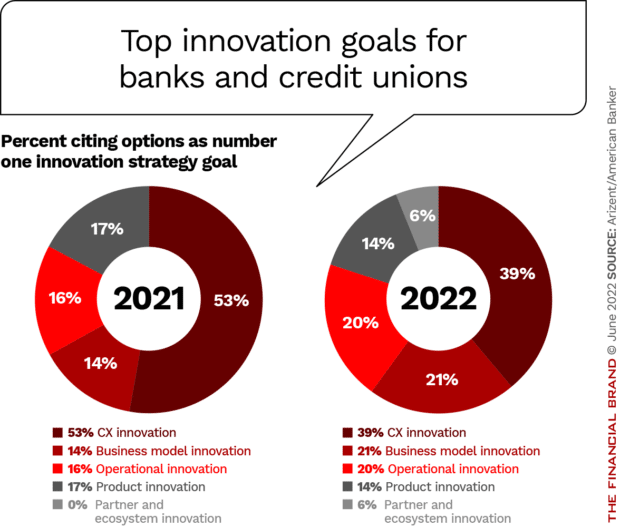 Needed: A Strategy, a Roadmap and a Plan

To succeed in innovation, financial institutions need a team to implement initiatives. Nearly half of respondents now have a dedicated innovation team, with three in five expecting to have one in place by 2024.

The report notes that centers of excellence could also help jump-start innovation initiatives, provide a working framework with best practices and reduce risk. These centers represent a cross-functional working group with responsibility for standardizing and scaling innovation across the institution and providing support for efforts that don’t have dedicated teams or leadership.”

Additionally, nearly 60% of respondents have an innovation strategy or roadmap. For many, that innovation strategy is now focused more on the back office and operational efficiencies, as mentioned above. While many banks successfully implemented one-off products and applications in the wake of the pandemic, they ultimately need the infrastructure to continue scaling innovation.

“The reality is that without upgrading and innovating back-end systems, such as modernizing a core banking platform or moving data to the cloud, it can be difficult to support game-changing customer-facing programs,” the report states.

As most banks and credit unions have centralized control over their innovation efforts, those who lack this alignment may find it an easy win, especially when they establish the proper performance metrics.

Aligning these technology investments with innovation priorities will also require moving customer and transactional data to the cloud. Many banks remain constrained in their innovation efforts because their data is separated in legacy core banking platforms. While 96% of early adopters have moved to the cloud or are in the process of doing so, only 62% of laggards have done so.

Read More: Why the Cloud is Critical to Your Digital Banking Strategy

On the plus side, more than 60% say technology modernization efforts make attracting and retaining talent easier.

To survive in the current state, banks and credit unions need more than just growth and efficiency. They need innovation. And in an environment of rising investments in innovation, institutions that believe they are holding steady are actually falling behind.