Subscribe Now Get The Financial Brand's FREE Email Newsletter
As one of the foremost leaders in financial services, Paolo Barbesino shares his thoughts on what inhibits innovation in banking. His thoughts were included in the 9th annual Innovation in Retail Banking report.

I was recently in Hong Kong, just the day after typhoon Hato forced the closure of the entire city. Walking in a suburban area in the new territories, I saw several brightly colored bikes left unattended on the grass. I felt this may have been the result of the fierce gales that also brought down trees and blew out the windows on several buildings.

I was wrong: with their QR codes and GPS systems, those bikes are what Jeffrey Towson recently defined “wild assets”. Mostly independent of any staff, support or traditional retail or distribution system, and released in large numbers, they are changing the bike sharing experience and its business model forever, not only in China.

By re-engineering bike sharing around wild assets and developing their big-data and AI based “herd intelligence”, Chinese companies like Mobike, and Ofo went from start-ups to global operators in less than two years. Today, their bikes are getting everywhere in a growing number of countries.

China bike sharing is a clear example of how nimble players leverage existing technology but assemble it in a completely new way in order to entirely disrupt an industry, rather than just incrementally improving the status quo. 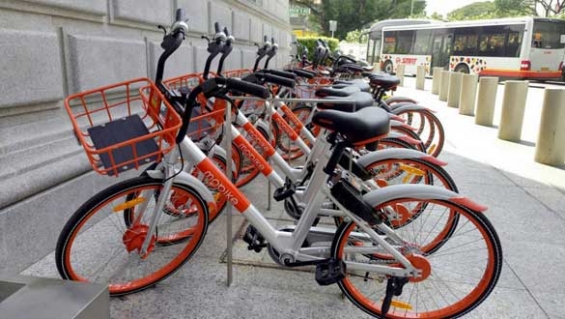 Why didn’t established bike sharing players get there first? In Europe, for more than 10 years, companies like Clear Channel had developed sustainable public transport solutions with cities such as Stockholm, Milan, Barcelona, Dijon and Antwerp that every year resulted in around 20 million bike trips.

In his ‘The Innovator’s Dilemma’ (1997), Clayton Christensen argued that in order to protect their market position, dominant organizations are prone to underestimating or dismissing competition, and often fail to take the necessary actions to react to disruption.

Some argue that something similar is happening to banking today. The level of uncertainty in the industry is growing at an unprecedented pace given the steady surge of a global fintech movement and the larger number of regulators around the world that focus on significantly empowering the consumer.

Banking is no longer a safe industry as it used to be. And whether its disruption will increase, again it depends on the global success of big Chinese disruptors such as Baidu, Alibaba, and Tencent that are spurring innovation in the global financial ecosystem, as Zhi Ying Ng and Eryan Zhou pointed out in a recent Forrester study.

All elements of the industry value chain are at risk as different domains are being touched. For any of them a host of fintechs are developing a clear value proposition at a pace that is incomparably faster than that of the incumbents: risk, intelligence & security; payments & transfers; core banking; blockchain & cryptocurrencies; lending & financing; trading & investing; money management & robo advisory; financial inclusion; insurtech; regtech.

The innovation gap between banking incumbents and nimble players is unlikely to shrink, as the former continue to struggle when discerning disruption from distraction, while the latter are free to experiment, fail, and pivot. Many incumbent teams fail to understand what is the real business impact of the ideas they are working on. In his seminal ‘Change by Design’ (2010), Tim Brown put forward a straightforward way to classify innovation and understand its business impact.

What type of innovation is a chatbot, a voice interface, biometrics, AI, or the blockchain? What are the use cases that can be built around these technologies? How can they contribute to any of the four types of innovation?

Nokia got distracted by the continuous optimization of its feature phone range, while playing with the same technology that Apple was putting together to disrupt the entire mobile phone value chain. On the contrary, you can miss what a potentially disruptive innovation can bring in terms of optimizing and augmenting what you already have. For instance, Samsung DEX may not be the next big thing for consumers, but by replacing PCs in bank branches it may help streamline in-store processes and enable compelling use cases in digitizing KYC and payments.

Innovation Impact on the Bottom Line

Without making sense of the potential impact of different types of innovation, it is hard to realize that incremental and evolutionary ideas have a significantly lower potential of creating value than revolutionary bets, but with a much lower risk. No doubt, disruptive innovation can be funded only if incremental and evolutionary innovations succeed in generating new value. But the question is whether in banking today an organization can thrive just by optimizing the as-is when the entire industry is facing a growing level of uncertainty.

Bansi Nagji and Geoff Tuff have shown that companies that allocated about 70% of their innovation activity to incremental initiatives, 20% to evolutionary ones, and 10% to revolutionary ones outperformed their peers, typically achieving a P/E premium of 10% to 20%. But when more-direct returns on innovation are considered, the return ratio is roughly the inverse of the ideal allocation above: incremental innovation efforts typically contribute 10% of the long-term, cumulative return on innovation investment; evolutionary initiatives 20%; and transformational efforts 70%.

Managing Innovation as a Portfolio

In an industry with a traditionally low amount of patents, it is no surprise that the number of ideas upon which individual players are working is usually too small to ensure the necessary ‘requisite variety’ that allows an organization to cope with changes in its environment. If innovation ideas are similar to bets, incumbents are making too few bets to have a chance to thrive.

Designing a digital banking value proposition exclusively around the assumption that the majority of customers will use a tablet, while mobile is just a scrapped down version with few functionalities, may be a risky bet if tablet sales stagnate and people move from PCs straight to smartphones.

Also the ratio between ideas that are conceived and those that are shipped to the end-customer is an indicator that the way innovation is managed is too rigid. When such ratio is too close to 1, this means that all bets go through the full innovation funnel, from opportunity mapping to ideation, from validation to prototyping, from MVP to customer roll-out. Far from being a sign of success, this hints at the entire innovation management being failure averse, nor allowing to turn failure into learning, making a pivot possible for the organization.

That is why instead of managing innovation as series of unrelated projects, a portfolio approach based on multiple bets allows both to mitigate the risk that any idea may not survive through the entire funnel, and the upside that a disruptive bet can transform the bottom line. But, such an approach can succeed only if the corporate culture accept failure and promotes learning.

Paolo Barbesino is SVP, Head of Digital, at CEE Retail UniCredit Group. Based in Vienna, he crafts the digital strategy and customer experience for one of the systemically important financial institutions in Central & Eastern Europe. Decoding and anticipating what consumers will do, he works at the crossroad where strategy, technology, and service design get together in order to bring to life digital products, services, and experiences for retail customers in the region.