Subscribe Now Get The Financial Brand's FREE Email Newsletter
Established by two former bankers, the Bank Innovators Council was developed to help financial institutions that may lack internal resources come together to brainstorm and test new ideas that could eventually be shared. Partnerships with Finovate, NextBank, BankersHub and Innovation Agency will hopefully provide additional momentum.

By JP Nicols, founder and CEO of the research and innovation firm Clientific, partner Bank Solutions Group and co-founder of Bank Innovators Council

Bankers and credit union executives have long sought a competitive advantage in a vast sea of largely undifferentiated competitors. For most players, and for most of the industry’s long history, the chief weapons in this war have been scale and localization. Either growing large enough to create economies of scale and/or scope, or trying to corner one or more local markets by being more, well, “local”. A few have even tried to accomplish both strategies simultaneously.

But how will those strategies play out in this new era of financial services? Regulators will not let the very biggest banks get a whole lot bigger any time soon. The top 100 banks in the U.S.— less than 1.5% of the 7,000 or so still around— already control 81% of the loans and 75% of the deposits. Well-capitalized and well-run small and midsize banks and credit unions will certainly swallow up weaker competitors as this quickening consolidation phase that we have all been predicting inevitably becomes a reality sooner or later. But will this truly create any new competitive advantages beyond survival of the (relatively) fittest? 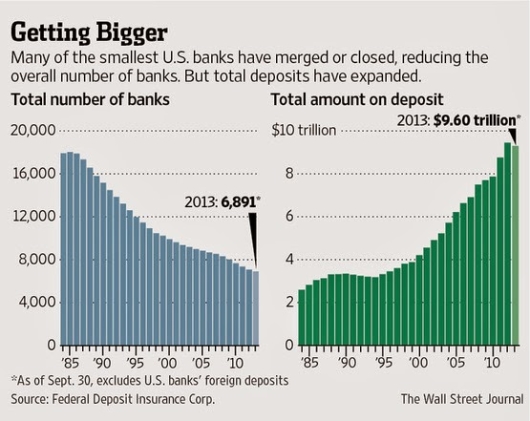 Sure, there are kernels of truth to each of these strategies. Having the scale to spread out increasing infrastructure costs is important, up to a point. And I chose the words ‘merely local’ for a reason. I think the real word the localists are looking for is ‘relevant’. Being headquartered in my hometown is fine, I guess. More jobs for the local economy. But as a customer, what I really want is for you to be relevant to me — and many of the behaviors of the banking behemoths did little to make me feel that way.

Those basic strategies worked well enough for the last few hundred years, but until recently, the industry was basically undefeated because it won all of its games by default. Sure, we had large banks and small banks, and credit unions, and for a time, S&Ls and Savings Banks; but these were all just slightly different flavors of the same basic model.

You can now live your entire financial life off the grid of traditional financial institutions — at least in your direct interactions. They still play a role behind the scenes, but the nameless, faceless utility that merely holds your insured deposits and ensures an efficient transfer of your funds from Point A to Point B is the very definition of a commodity trap.

The concept of “The Commodity Trap” was created by Richard D’Aveni in his 2010 book Beating the Commodity Trap, and explored further in Henry Chesbrough’s 2011 book Open Services Innovation: Rethinking Your Business to Grow and Compete in a New Era. The fundamental characteristics of the Commodity Trap according to Chesbrough are that:

Business process knowledge and insights are widely distributed
Manufacturing of products is moving producers with very low costs
The shrinking amount of time a product lasts in the market before a new and improved one takes its place
Check, check and check for the financial services industry, and scale or localization alone are not sufficient weapons in this battle.

Winners in this new era have to collaborate with customers, vendors, and even other banks to find new ways to be relevant to their customers and avoid becoming victims of the commodity trap. There is always a bias for established firms to protect existing revenue streams and manage for past results rather than future outcomes, and this is exacerbated in the banking industry.

Think about the behaviors that are sought, encouraged and rewarded in banking. They’re all about avoiding risk. You’re praised and eventually promoted if you’re the person who always thinks up new ways ideas could fail. The regulators certainly reinforce those behaviors, and they are more than appropriate for things like capital management and credit underwriting.

But bankers make hundreds of decisions every day, both large and small, that will never run the risk of putting the shareholders in harm’s way. Those decisions should include innovating new products, services, and experiences, if they are managed properly. Yes, innovation is about taking risks, but they should be small, calculated risks that lead to real learning and real improvement.

Innovation has to be expanded beyond a single product group or business line, and even more importantly, innovation has to be more than brainstorming new ideas inside the bank. Today, an increasing number of bankers have “innovation” somewhere in their job description, and they get to spend time at cool events put on by the likes of Finovate, Innotribe, Bank Innovation, Money2020 and NextBank, seeing new ideas from all over the globe.

I’ve attended plenty of these events myself, and I love seeing the perspective of startups with no legacy business model to protect and defend, and more research and development spending is coming from smaller firms now. According to the National Science Foundation’s Business Research and Development Survey, firms with greater than 25,000 employees accounted for only 40% of R&D spending in 2008, down from 70% in 1981.

Bank innovators are always energized to meet each other at these events, too. It gets pretty lonely being surrounded by the “business prevention department” back at the office.

We started the Bank Innovators Council based on the idea that the “FinTech” entrepreneurs had incubators, accelerators and venture capitalists to support their innovation, but bankers were on their own. We believed that even banks that can’t afford their own dedicated innovation teams can’t afford not to innovate.

Researchers Eoin Whelan, Salvatore Parise, Jasper de Valk and Rick Aalbers published a paper in the MIT Sloan Management Review called Creating Employee Networks that Deliver Open Innovation in 2011, and they cite the importance of so-called “network brokers” in bring new ideas to fruition in organizations. These roles have become important today because of the explosion of data dissemination from online forums, blogs, search engines and wikis, and these “in-house connectors are needed to complete the circuit.”

The paper suggested that internal “Idea Connectors” should be encouraged to have more “networking activities through involvement in cross-functional projects and job rotations”, and that their counterpart ‘Idea Scouts’ should be given “priority to attend external networking events such as conferences or trade shows. This is not only a way to create alternative channels for ideation; it also allows management to demonstrate its commitment to the front-runner role that these employees play in sparking innovation.”

Ultimately, this coalition of the willing has to expand to include people who don’t currently have the word “innovation” in their job description. For those of us at these industry events, we embrace the word, thrill at the very sound of it. But it’s actually a scary word for entrenched bankers. It sounds too much like “risk”. Phil Swisher, Head of Innovation at Brown Brothers Harriman, and a charter member of the Bank Innovators Council talks about shifting the conversation with these people from the “I” word (innovation) to the “R” word (revenue).

“That’s why we help members focus on why they want to come up with new ideas—what problem are they trying to solve, and for whom?—and what happens after they come up with them. After all, if those new ideas don’t eventually lead to new revenue, how valuable are they?”, says Swisher.

Maybe innovation is a scary word for you too, but I’ll bet you’re looking for new ways to generate revenue and better ways to interact with your customers. It’s hard to innovate in banks. It’s even harder doing it alone. Banks can walk farther if they walk together. Which is why the Bank Innovators Council was created.

Besides, we are a whole lot more fun than the business prevention department.

JP Nicols, CFP® is a former bank executive and the cofounder of the Bank Innovators Council, a membership organization that helps support, promote, and facilitate innovation within and amongst its member banks. His work has been featured in leading industry publications and on his blog at jpnicols.com