Subscribe Now Get The Financial Brand's FREE Email Newsletter
The third annual BAI-Finacle Global Banking Innovation Awards ceremony took place as part of the BAI Retail Delivery Conference again this year, recognizing innovation excellence in the banking industry. As in the past, despite industry challenges, there are amazing innovations happening worldwide that impact the daily customer experience. Interestingly, with the exception of Citibank in 2011, no other U.S. bank has ever won the award.

Traditionally, the financial services industry in the U.S. has been slow to innovate compared to many other industries due to compliance and regulatory obligations, dependence on large internal and external infrastructures and the need to focus on security and privacy. In addition, the lack of a formal structure or process for innovation or dedicated funding also inhibits initiatives.

Despite these limitations, the industry globally continues their effort to innovate, with varying degrees of success. Some institutions are recognized regularly for their efforts, with some regions (Asia Pacific) being hotbeds for new ideas and innovation. In addition, social media banking innovations are being found in places like India, Brazil and Nigeria.

The Efma and Infosys Finacle sponsored study, Innovation in Retail Banking: Simplify Technology to Innovate provides a good perspective on global innovation trends, ways banks can overcome some of the barriers to innovation and why some banks have been so successful in their efforts. This year is the fifth year of the study and it appears that banks worldwide are increasing their investment in innovation and beginning to structure organizations in a way that is more conducive to innovative practices.

While defining innovation continues to be a challenge, examples of new ideas globally illustrate the need for banks to measure not only against domestic competition but also against global standards. The key findings of the study were:

The study also measured the current status of innovation deployment in mobile and online and found that:

Innovation in the U.S.

So why is it that in the USA, where more banks and some of the largest banks in the world exist, is true innovation so difficult to find? Here is what some of the people who watch innovation regularly have said when interviewed.

“Many U.S. Banks are so invested in their legacy business models that it makes it very hard to undertake truly disruptive innovation projects. Banks in emerging markets have to be innovative to reach their customers, many of whom don’t have access to the broad range of choices that Americans have.” – JP Nicols, co-founder Bank Innovators Council

“While there are many reasons U.S. banks are innovation laggards, I think legacy technology, regulation, compliance, and risk aversion have to top the list of reasons why we’re not seeing more movement.” – Bradley Leimer, Vice President, Mechanics Bank

“The US is a major leader in internet innovations but, outside this, it has been behind most other regions of the world on mobile developments. This is largely due to the tariffs and state splits between cellphone usage and providers which, when you get to China or Africa is a totally different position. These newer markets do not have the old systems in place and therefore saw mobile as a leapfrog for digital services to the customer. American banks just don’t see it that way, and see it more as an overlay to what’s already there.” – Chris Skinner, Author of the new book Digital Bank

The Efma/Infosys study found that 73% of banks in the Americas (they did not break out the U.S. specifically) were increasing investment in innovation in 2013 compared to 2012. This is less than for banks in Middle East, Africa and Asia Pacific but is more than Europe. By far the biggest area of increase for the Americas was in ‘channels’, with the ‘product’ category being the lowest area of increase. 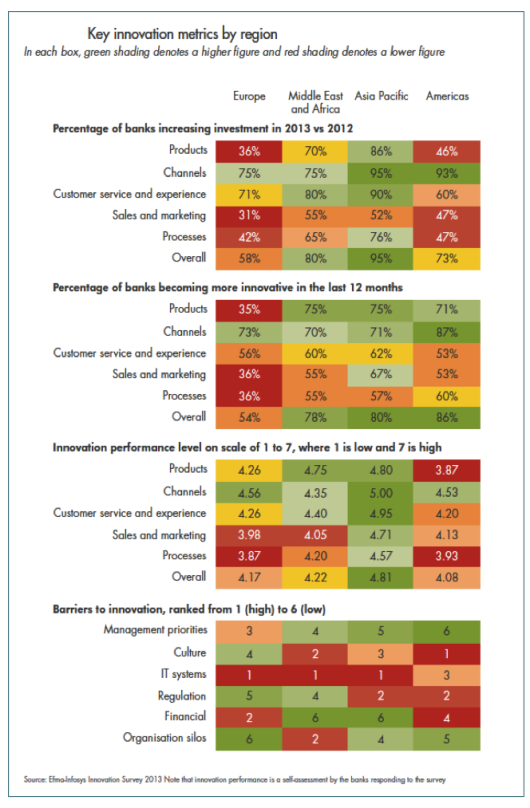 In contrast to the other regions, the main barrier to innovation for the Americas, according to the Efma/Infosys study, was culture rather than IT systems, which was only the third largest barrier. Regulation was the second most significant barrier. The least important barriers were senior management and organization silos.

In conversations with leaders in the industry, here are the barriers they mentioned.

“Two things. The first is that innovation is simply not in the DNA of most bankers. They’ve been trained throughout their whole career to identify and avoid risks, and innovation is about taking small risks and failing fast and cheaply and learning from those mistakes to get to the right answer quickly. The second is analysis paralysis. Most banks have too many silos with conflicting agendas, and that makes it hard to actually put new ideas into action. Consequently, those few innovators who do exist in banks find themselves surrounded by the ‘business prevention department’.” – JP Nicols

“The U.S. market is plagued with many more problems than its international peers – we have a more complicated system of financial players, embedded legacy technology and processes for everything from acquisition to money movement, from telcos to payment providers – and in spite of changing client behavior, we continue to prop up legacy financial services like paper checks.” – Bradley Leimer

“Lethargy and lack of competitiveness. Lethargy embraces everything from ‘oh, the regulators won’t allow it’ to ‘if ain’t broke, don’t fix it’ to ‘but the legacy, the legacy, the legacy’. If Barack Obama ran a typical bank, he’d ask ‘can we fix it?’ and the team would answer ‘why bother?'” – Chris Skinner

As can be seen from the winners (and finalists’) entries, much of the innovation that was recognized dealt with moving from traditional to digital and mobile channels. In addition, it is important to note the impact of culture as it relates to innovation. Not only did Hana Bank and CaixaBank have multiple entires for this award, but CaixaBank has been named the most innovative bank two out of the last three years.

We will most likely see more examples of innovation in the U.S., either by traditional financial institutions or by one of the many newer neobanks that have been created or from some of the financial intermediaries that are providing the tools for U.S. banks to serve customers better.

When asked about the dearth of U.S. representation, Debbie Bianucci, president of the BAI stated, “Each year the BAI-Finacle Global Banking Innovation Awards program receives numerous submissions from innovative U.S. banks, and there have been finalists from the U.S. in both 2011 and 2012. Each year we receive over 200 submissions from banks from around the world, all who have inspiring stories to tell about how they serve their customers differently. It’s a very competitive program with just a few finalists and winners. We will encourage U.S. banks to continue to submit their innovations for the 2014 awards program, which begins in January, 2014.”