Subscribe Now Get The Financial Brand's FREE Email Newsletter
The high rate of mobile banking penetration at Chase Bank, Bank of America and introduced direct banks such as Simple, GoBank, Bluebird and Moven could provide a significant business advantage as digital channels tend to build loyalty and provide the opportunity to reduce costs through transaction migration.

A report from Bain & Company entitled, “Customer Loyalty in Retail Banking” found that mobile banking is more likely to increase a customer’s likelihood of recommending the bank than any other channel interaction and that features such as remote deposit and even the ability to check a balance impact loyalty. The research also found that once customers moved to mobile, roughly half stated they made fewer visits to the branch which can lower costs.

As mobile banking use increases, banks have the opportunity to ‘delight’ customers with new applications and functionality. For instance, while remote deposit capture still represents just a small percentage of branch and ATM transactions (as shown by the size of the circles below), it is by far the most likely to ‘wow’ the customer (64%) and provide the opportunity to recommend the bank.

Interestingly, even routine mobile transactions such as checking a balance or transferring between accounts has a likelihood to delight (44%) and is a strong influence on loyalty according to the Bain study. 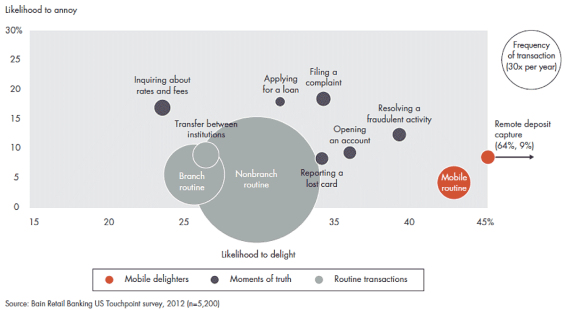 The delight with the mobile channel increases with use as well, with higher frequency mobile transactors being more likely to recommend their bank regardless of age category or type of institution. It was found that younger customers (age 25-35) were more likely to illustrate stronger loyalty (as measured by Net Promoter Score) based on mobile and that the larger and direct banks had the largest lift in NPS score between mobile and non-mobile users as shown below.

This disparity in loyalty between the larger and smaller organizations and for direct banks is believed to be the result of more advanced functionality by the largest players such as Chase, Bank of America, U.S. Bank, PNC, Wells Fargo and the direct players. 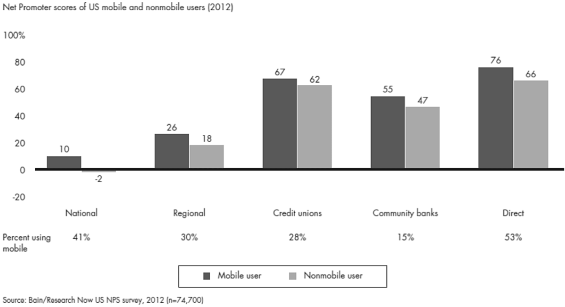 As shown above, for retail bankers battling for new customers and the loyalty of existing customers, digital channels can be a powerful tool for building loyalty and referral business. However, digital advantages are short-lived as mobile development is getting greater emphasis and differentiation is short-lived. For instance, while remote deposits may still be a differentiator in some markets, they are quickly becoming table stakes in the competition for the mobile customer. But the potential loyalty of a satisfied mobile customer can’t be disputed.

While doing the mobile basics is important, the key is to continually develop innovative applications that appeal to the mass market while building premium tools for the affluent customer who is more demanding. This could include personal financial management (PFM) applications as well as tools that integrate both online and offline advisory capabilities.

The importance of developing premium applications is highlighted by the finding that moving an affluent or mass affluent customer from being either unsatisfied or ‘passive’ to being a ‘promoter’ is worth five times more than converting a mass market customer. This is because an affluent customer who is loyal has more products with the bank as well as having the tendency to recommend their bank to other affluent friends. In fact, Bain estimates that converting just 5,000 affluent customer from being passive or a distractor to being a promoter could generate $25 million in lifetime net present value. 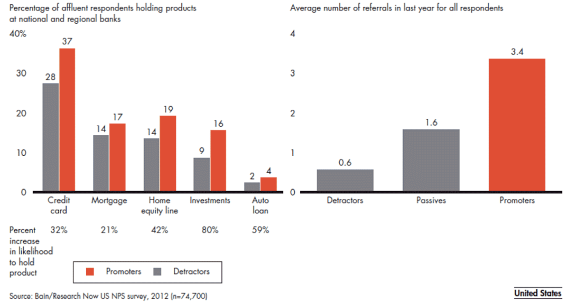 Moving From Physical to Digital

While not being a 1:1 conversion, mobile banking can divert large volumes of high-frequency routine transactions, reducing branch visits and providing the springboard for branch redesign and reduced costs. And, as shown above, these same routine branch-based transactions either don’t have a big impact on loyalty or are more prone to annoy customers than mobile transactions.

The benefit of moving from the physical to digital channels is more acute in the U.S. than any other developed country due to our dependence on the brick-and-mortar facility. According to the study, the average customer in the U.S. visits the branch more often than in other countries and 90% of the transactions done in a branch are considered routine (cashing checks, making deposits, checking balances, etc.). 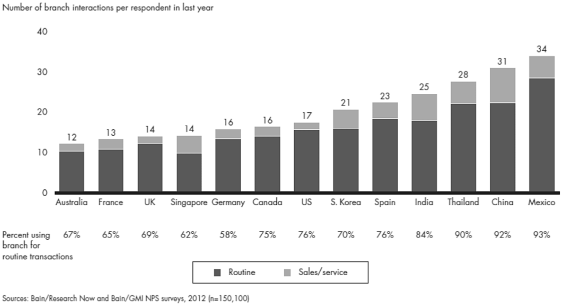 According to the Bain study, once customers turn to mobile channels, roughly half made fewer visits to a branch: 29% of the U.S. mobile converts reported making between one-tenth and one-half fewer visits, while 18% said they reduced their number of visits by half or more.

This movement from the physical to digital can have an immediate bottom line impact. According to research conducted by Diebold, a transaction that costs $4.25 in a branch would cost $2.40 through a call center and only $.20 online. Moving the customer transaction to the mobile channel would reduce the cost to $.08. This transition obviously would also allow banks to reconfigure branches and remove expensive human interaction or allow for the closing of branches altogether. 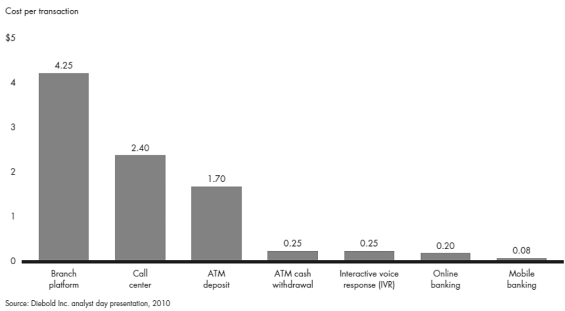 This change in branch design can go beyond just the reduction of costs to also improve the overall customer experience according to Bain due to shorter wait times, more consistent service, etc. For instance, Coastal Federal Credit Union does not employ a single teller behind the counter at its 15 branches and Boeing Employees’ Credit Union has employed a ‘teller-less’ branch layout for years, leveraging online and mobile banking combined with multiple teller machines. This reduces the required footprint of branches, extends hours of operation and has led to market leading customer satisfaction scores.

The Disappearance of Branches

Even with the rapid acceptance of mobile and online banking and the business rationale for moving more customers to digital channels, branches will not disappear overnight, especially in the U.S. But, as banks continuously improve their mobile banking applications, encourage customer to try these new capabilities, and provide experiential incentives to move their routine (and non-routine) transactions to less costly and potentially easier interactions, branches will move from center stage to being part of a more integrated omnichannel experience as illustrated below.

Instead of processing thousands of basic transactions, branches in the future will be more similar to Apple stores, being product showrooms, serving as sales centers and locations to provide expert 1:1 advice. Even these functions may move to digital video terminals in the future as consumers become more comfortable with technology. 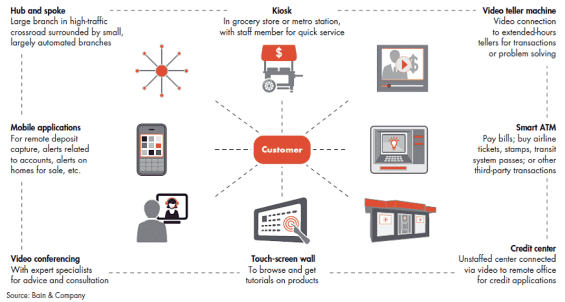 To make the transition, digital channels need to be more intuitive and convenient while providing financial and non-financial benefits. Execution and ease of use will be critical and the use of ‘big data’ for the benefit of the customer will be expected.

We are already seeing this type of customer focus with new offerings from Simple, GoBank and Moven, where financial management tools are not added to a mobile application but integrated in the offerings. This type of integration is also evident overseas with innovative banks such as Commonwealth Bank of Australia, Fidor Bank in the Netherlands and U.K.’s First Direct.

Given all of the benefits discussed around moving more customers from the physical branch to the mobile and online device, you would expect marketing to view this channel shift objective as one of their primary goals in 2013.

Unfortunately, based on the 2013 State of Bank and Credit Union Marketing report just released by The Financial Brand, the focus on online and mobile banking adoption falls to sixth on the list of priorities after loan growth, cross-selling, new customer acquisition, brand development and attracting a younger customer. 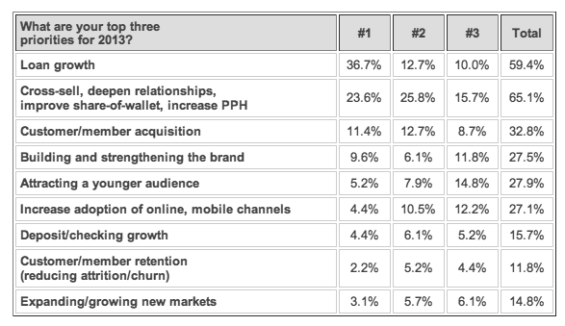 Part of the challenge may be that marketers could believe that the responsibility for mobile banking adoption falls into the lap of the applications developer or another person at the institution, but research shows that adoption of mobile is really everyone’s responsibility and that all channels should be used for promoting the benefits of the mobile channel.

Even though financial marketers say ‘loan growth’ is their most important strategic goal for 2013, they rank ‘mobile banking solutions’ as the most critical product/service to push this year… followed by loans. 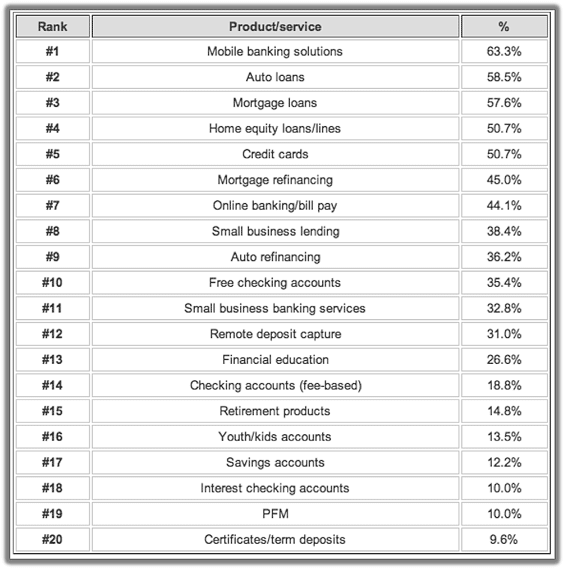 So, will the emphasis on promoting mobile and the power of mobile make branches disappear? Time will tell, but with the loyalty and cost advantages of digital channels, traditional banks will need to move quickly to keep pace with the innovations being developed by the new branch-less players who are quickly entering the financial services battlefield.