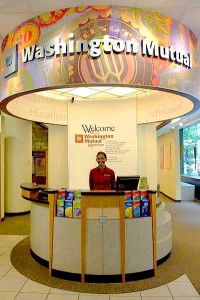 It’s been known for months that JP Morgan Chase planned to replace Washington Mutual’s innovative retail branch design with a much more traditional model. Now that the changes are actually being implemented, the failed thrift’s approach to branching is again being called into question.

Wrong. Just because WaMu collapsed does not mean its branch design was inferior. That’s a fallacious, oversimplified inference (something The Financial Brand pointed out earlier this year).

“Traditional branches are superior in every way. They might be boring, but they’re practical.”
— Charles Scharf,
CEO/Chase Retail Banking

WaMu rolled out its retail branch design with great fanfare in 2000, and used the new model as they moved into new markets such as Las Vegas and Atlanta. Later they remodeled existing branches to incorporate the new retail features. Before WaMu collapsed last September, they had spent roughly $1 billion on a branch-building binge.

Key Questions: Why would Chase want to spend millions undoing everything WaMu had taken $1 billion and 8 years to accomplish, despite a company-wide push to cut costs? Why would Chase basically drag the WaMu branches back to the past?

But the real reason Chase needs to remodel WaMu’s branches is that the two banks had totally different business strategies.

It boils down to these two fundamental differences: (1) Chase offers small business, and (2) Chase offers private-banking services. WaMu never did. 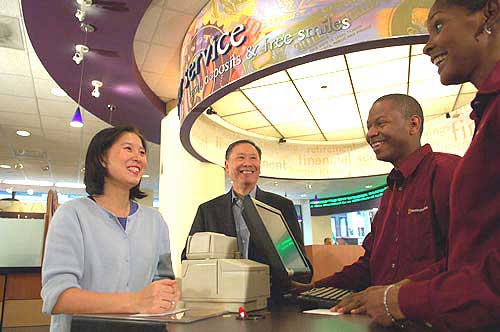 Operationally, these two components of Chase’s business model necessitates branches with certain elements. WaMu branches branches were never designed to accommodate merchant services, nor did WaMu’s branches provide the degree of privacy required for a highly-consultative private banking audience. That’s because WaMu was a retail bank. Chase may offer retail financial services, but it’s a commercial bank at heart.

WaMu, as retail bank, was quite successful…at least from a branding perspective. The thrift did everything it could to distance itself from other competitors in the crowded retail financial space. It ran ads touting how WaMu was different as they made fun of bankers. They changed their name from Washington Mutual to WaMu.

WaMu new who it was and knew how to build its brand. That meant coming up with their own branch design and breaking away from traditional branch offices donning stark decors and staff tucked safely away behind bullet proof glass.

Which is exactly what WaMu did when they introduced their “Occasio” branches. Occasio locations were stylish retail operations that didn’t feel much like a bank at all. They did away with the traditional teller counter and windows. Customers were greeted by a concierge, and dealt with tellers at free-standing “pods” that resembled tall bar tables.

Occasio broke down not just the physical wall between customer and teller, but also a psychological wall. It put the service rep side-by-side with the customer in a casual, conversational atmosphere. And without ever making security an issue.

Latin for “favorable opportunity,” Occasio became such a symbol of pride for WaMu’s brand that they trademarked the name and got a patent on the branch design, reportedly the first patent for a store concept in history.

The branding was brilliant. The business model (risk management notwithstanding) also made a lot of sense. Occasio branches were designed to be high-speed transaction centers — no waiting, no lounge, no sofas, no chairs for tellers necessary. No need to sit down. Get in, get out. 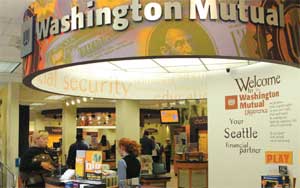 Bottom Line: WaMu’s branches worked…for WaMu. Chase is talking up their more traditional branch design because that’s what they know and what works best…for them. Every financial institution needs to find its own unique branch delivery model — one that compliments their brand and business strategies. That means carefully engineering an experience while balancing your privacy and security concerns.