Wells Fargo is launching a new branch concept — what it’s calling “the neighborhood bank format” — with a footprint one-third of the size of a typical location.

Wells Fargo is rolling out a branch prototype design with a smaller format that the bank hopes will allow it to reach more micro markets that aren’t suitable for its conventional larger stores.

It also features a paperless workflow and new large-screen ATMs.

The first location using the new design will open in the trendy NoMa neighborhood of Washington, D.C. on April 15.

“With this new store concept, we’ll be able to offer person to person sales and service along with leading banking technology in settings that previously would have discouraged us from building a store,” said Jonathan Velline, head of Wells Fargo ATM Banking and Store Strategy.

“The day of the big branch doesn’t make sense for the customer or the bank.”
— Andy Harmening,
Bank of the West

According to research conducted internally by Wells Fargo, 80% of customer transactions don’t require employee assistance, but 70% of customers still visited a branch every six months.

Rumors about the death of branches have been circulating for nearly two decades, although with the advent of mobile/tablet solutions such sentiments are being echoed at an ever-increasing volume today. Wells Fargo poo poos this position.

According to the Wall Street Journal, typical branches are larger than 4,000 square feet and cost roughly $3 million to build, depending on the size and other features. Older branches can be as large as 10,000 square feet. 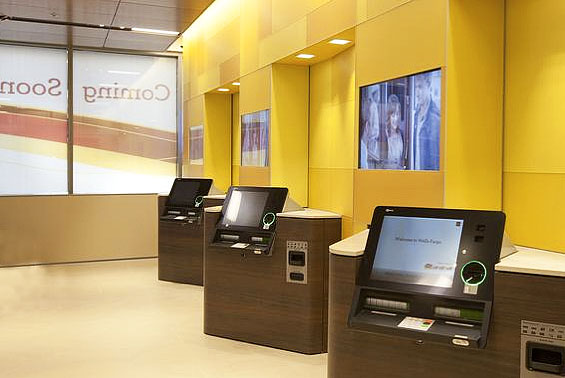 The branch’s walls will fold in at night so that only the ATMs are available to customers. 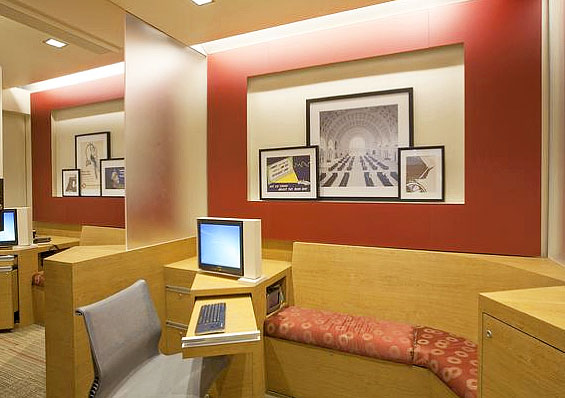 No traditional tellers. No safe deposit boxes. No private offices. Bank employees will walk around with computer tablets fastened to their hands.

This new branch concept offers technologies found in traditional Wells Fargo stores, such as ATM software that anticipates a customer’s preferred transactions, instant issue debit cards, and eReceipts. It also will have wireless tablets and phones that team members will use to serve customers. 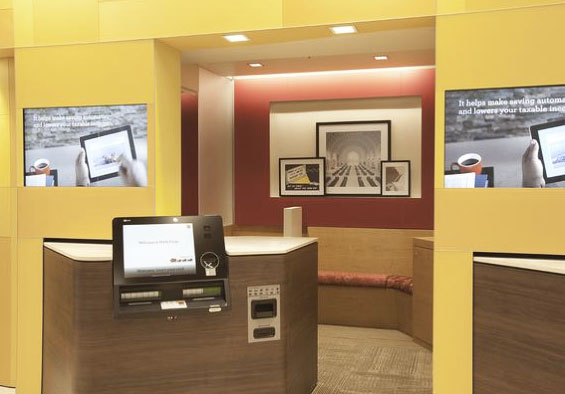 “Customers are going to a branch for a reason; it is to deal with people, not an iPad.”
— David George, R.W. Baird

A free wireless hotspot will also be available for customers to use. After hours, the store transitions into a smaller lobby format, providing customer’s access 24/7 to several ATMs that dispense $1, $5 and $100 bills in addition to the $20 bills a typical ATM offers.

To develop the new branch concept, the bank built a prototype in a Chelsea basement.

“We storyboarded it out, but there’s only so much you can tell looking at 2-D paper,” he explained in an interview with CNBC.

Creating life-size beta labs to test branch designs before deploying them publicly is becoming an increasingly common practice in the financial industry.

“We expect to evolve the concept as we receive feedback from the new NoMa store,” Velline said. “We believe in using customer feedback to test and learn new products, technologies and services as we seek to continuously provide leading banking experience that meets all our customers’ financial needs.”