Subscribe Now Get The Financial Brand's FREE Email Newsletter
Universal bankers are one of the hottest trends in the financial sector. More and more financial institutions are deploying universal bankers in branches, but are they getting the results they expect? Here's what senior leaders need to know to realize the full potential of universal bankers.

It’s impossible to separate the evolution and adoption of universal bankers from the changing role of the branch. Falling transaction levels means fewer branches, and those that remain are smaller. The need to save on staffing costs have accelerated the notion that fewer branch representatives need to take on more duties.

But research shows time and time again that consumers still want to be able to visit branches for service, especially for opening new accounts and for conducting more complicated applications and transactions.

Read More: Bridging the Technology Gap – The Rise of the Universal Banker

No More ‘Hot Potatoes’ Thanks to The ‘Swiss Army Knife’

The “universal banker” concept has been working its way into banks and credit unions for about a decade now. According to some estimates, about half of all institutions have adopted universal bankers in some way, with roughly one in eight branches today using these positions somehow.

The basic universal banker as we know the job today is a cross-trained employee “who can act as a teller, process loans, open and close accounts, and perform most of the other functions customers want from their local bank branches,” as a white paper by experience design agency Adrenaline describes. 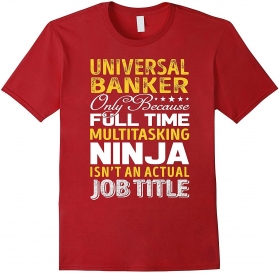 The position frequently is described as a “Swiss Army Knife” combination of various branch roles, leading to lengthy job descriptions. For instance, in an online ad for a universal banker position at Cape Cod Savings, for example, the list of requirements included 19 different bullet points.

Frequently, a universal banker may be the sole employee serving the consumer that day, unless a visitor requires a specialist in mortgages or another more complicated product area. This improves the experience by making customers feel less like an unwanted hot potato.

“Handing off a customer from one specialized-but-limited employee to another is not only frustrating for the customer, but has implications for productivity and resource utilization behind the desk,” states a white paper by CSI.

Alyson Clarke, Principal Analyst at Forrester, says that “anything that stops hand offs is great.”

Ironically, consumers may not even know when they are being served by a universal banker, says Clarke. They may recognize that service seems more painless at their bank or credit union, but they may not recognize that a staffing change made the difference.

While Clarke says that some institutions these days are tracking the “customer journey,” she says many would benefit from tracking the “employee journey” as well. What path do branch representatives take to meet a consumer’s needs —  directly, through hand offs, or multiple service steps?

Read More: The Branch of the Future – What Does It Look Like?

Realizing the Promise and Potential of Universal Bankers

There are many benefits to the universal banker model. For instance, Peak Performance points out that the position appeals to Millennials. They enjoy the opportunity to learn multiple skills, and the variety that the universal banker role can bring. Being a universal banker sets up an employee to be “educator-in-chief” — a reliable advisor with multiple “channel fluency”, and the ability to resolve issues quickly. All huge for customer satisfaction, but also for employee job satisfaction. This can not only save an institution the costs of traditional staffing, but also potentially reduce branch staffing turnover.

But that doesn’t mean there aren’t risks and challenges involved with universal bankers. A study by Kiran Analytics found that only 39% of institutions that had adopted the universal banker model felt the effort had succeeded.

Steven Reider, CEO at Bancography, says banks and credit unions can experiment with universal bankers at various levels. Reider suggests it could start with just simply cross-training branch staff, and only go that far, as a test, enabling a group of employees to swing in and out of the teller line as needed. If an institution wants to go all in, they would almost certainly need to invest heavily in new branch layouts and technologies — e.g., teller pods, cash recyclers, and tablets.

Experts agree that implementing universal bankers where they are most likely to work best is advisable, especially in the beginning.

“If transaction demand still consumes the majority of a teller’s time, then converting that role to a higher-paid universal banker simply raises salary costs, as that employee would spend limited time in non-transaction functions anyway,” Reider says. “But with high-transaction branches becoming less common the universal banker model enjoys broad applicability in the industry and warrants consideration in its broadest format.”

Universal bankers can fill many different roles. For instance, they frequently demonstrate banking technologies, especially for older consumers and less tech-savvy consumers who need more hand-holding before they adopt digital channels. But that doesn’t mean universal tellers are the right tool for every job.

Remember the Swiss Army Knife analogy? Having all those tools on one knife can be cool, but sometimes a dedicated tool can be better suited to specific jobs.

In the same way, a specialist often can serve a consumer’s need better. Having knowledge and training that is a mile wide but only an inch deep can be a trap for the universal banker, suggests Alyson Clarke at Forrester.

“Universal bankers are not personal bankers nor are they relationship bankers.”

Other experts point out that in spite of their wide duties, universal bankers are not personal bankers nor are they relationship bankers. Those are different roles, with additional training and background, for consumers whose business potential justifies the costs.

The best programs acknowledge this, says Timothy Reimink, a consultant at Crowe.

“Universal bankers need to be supported with specialists, and they need to know when to connect customers with those specialists,” Reimink explains. “Often it is a ‘soft hand off’ that they are making.”

Increasingly, the next person a branch visitor meets after talking to a universal banker is a remote specialist addressing them over an interactive two-way video interface.

Managing Universal Bankers Can Be a Challenge

Universal bankers aren’t stamped out like widgets in a factory.

Nick Miller, President of Clarity Advantage, speaks of the need for branch managers to be a combination of quarterback, coach, and choreographer. Just as universal bankers need to be trained in how to introduce the consumer to the institution, its services, and the right people, their branch manager needs to show them how best to work with customers and fellow branch staff and specialists. Even “storyboarding” — helping universal bankers visualize a service interaction — can help, says Miller.

Indeed, the role of the branch manager changes with the adoption of universal bankers. The manager may have traditionally been the branch sales person. Settling into the sales manager role is a gearshift, and “coaching the coach” can help.

One of the branch manager’s new jobs will be to encourage former tellers turned universal bankers not to fall back on their comfort zone, turning a consumer over to someone because they feel more comfortable with transactions rather than selling. It all goes with the title — and the higher pay grade.

“The universal banker approach is not supercharging the branches from a sales perspective.”
— Dale Johnson, Novantas

A key shift for former tellers transitioning to universal bankers is the selling role, and there is broad agreement that more sales training is needed to move results where they need to be. Clarke says that retail banking institutions overall remain weak in selling much beyond what people come in for when they open an entry-level account.

While much is said about the efficiency that adopting a universal banker program brings, Dale Johnson, Managing Director at Novantas, says he’s talked with retail banking executives who assure him that “sales trumps efficiency.”

Cutting costs is great, but moving more product means a lot more. Johnson says that his firm’s research indicates that universal banker programs are definitely producing greater efficiency, lowering staffing costs. “However,” he continues, “increased sales are still elusive.” Simple products like credit cards do get moved, he adds, “so they are getting part of the gain, but the universal banker approach is not supercharging the branches from a sales perspective.”

Further refining universal banker compensation may raise results. In the wake of the Wells Fargo cross-selling scandal, individual incentives still have a whiff of stigma, but incentive pay for sales is a fundamental in many industries.

Johnson says some institutions have thought about more team-based incentives — a post-scandal approach that Wells itself adopted.

How Long Will The Universal Model Last?

The tenure of the universal banker concept is subject to debate. Most experts feel that the concept will continue to evolve as the role of branches gradually changes and the interplay of physical and digital channels continues to develop.

While most think this multifunction role will be around for quite some time, Johnson at Novantas, however, thinks the universal banker concept as we know it today will prove to be an interim step to something new, different. He sees the trend moving in parallel with the evolution in branches. As transactions disappear, the job will become more consultative, and specialty experts will still be needed.

He sees the role of universal tellers transitioning to more of a “skilled gatekeeper” position, where generalists talk to consumers and guide them right to the specialists they need, with technology taking up the transaction stream.

“You’ll have better trained individuals who are jacks of all trade,” says Johnson, “and others who are more specialized.”

In time, the “universal” title will disappear, he says.

“In the future, we’ll probably just call them all ‘bankers’.”