Summit Credit Union has created a first-of-its-kind “Inspiration Branch,” which is full of 3-D visualizations of various dreams and goals. Summit has transformed its Fitchburg location into a virtual stage where people can physically interact with common ambitions and goals.

Flowing from one true-to-life scenario to another, the settings inside the branch include:

“When we are young, we dream big dreams and sometimes, as we age, they fall by the wayside of our busy lives,” says Kim Sponem, CEO/President of Summit Credit Union.

“We have re-imagined what’s possible to support our members’ financial wellness,” Sponem continues. “In a dramatic, cost-effective and innovative way, we’ve brought dreams to life in our new Inspiration Branch to remind people of their dreams and to energize and inspire action.”

Matt Davis, Director of Innovation at credit union think tank Filene, says the branch concept is an interesting way to merchandise retail financial services. “Instead of posters or brochures to market student loans or mortgages, life-sized scenes of a child’s bedroom and a college campus help members visualize what Summit Credit Union can make happen.” 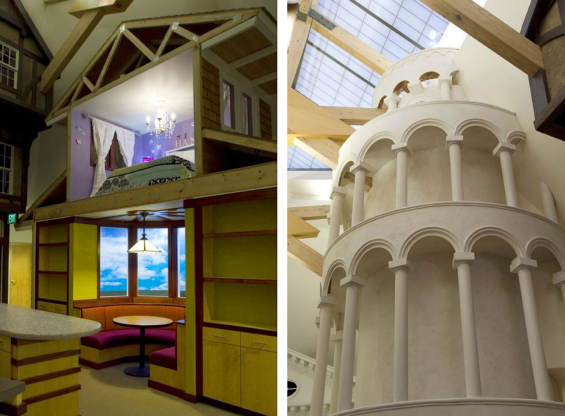 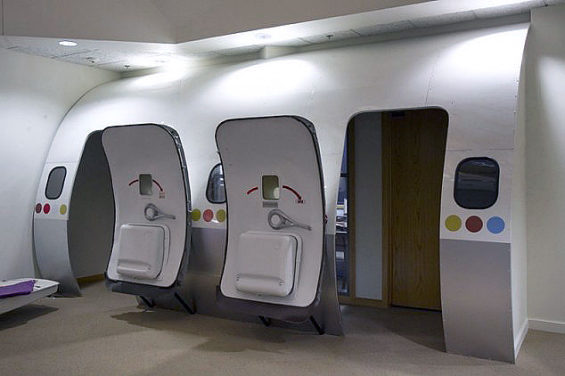 One office was transformed into a jumbo jet, fully-equipped with real airplane seats and a flight simulator. 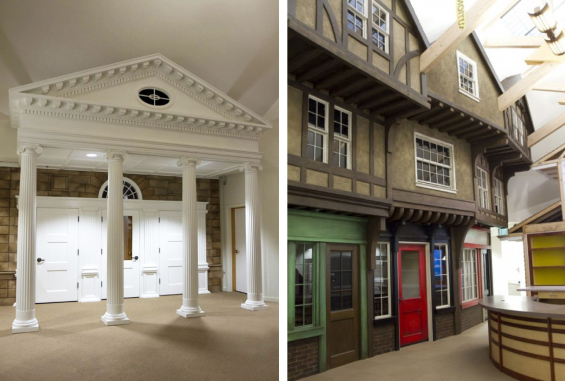 Sponem says Summit began brainstorming the ideation for the “Inspiration Branch” more than two years ago with Becky Gerothanas, the credit union’s SVP of Operations. In addition to showcasing quintessential 3-D depictions of common dreams including home ownership, education and travel, the branch was designed with an open and informal concept. There are no traditional teller lines.

The branch will continue to offer all the financial services and transactions of a traditional Summit location. In the new setting, members have an option to meet with Summit advisers in more casual, open areas, such as an English pub setting, complete with chairs from a real pub in England, or a breakfast nook, where they will be visually reminded of their dreams and goals.

Private meeting spaces were also designed with the inspiration theme in mind. For example, members can meet with their financial advisor inside the airliner replica, which, in addition to real airplane passenger seats, also includes captain’s seats, headsets and a flight simulator designed to occupy and entertain the children of members during meetings.

“I love seeing how people react to it,” says Becky Aide, a 15-year Summit employee. “I’ve seen people walk out because they don’t think they’re in the right place. You don’t expect to see this when you walk into a financial institution.”

Sherry Johnson, who manages the new Inspiration Branch for Summit says the most common question she gets from members is, “Are we in Disney World?” Other questions she often hears: ‘Is this still a credit union?” and “Can I still do my transactions here?’”

The Fitchburg location was chosen to pilot this concept in part because it was already scheduled for major capital improvements — the first since it was built in 2000.

The inspiration façades have been designed by Strang Architects, and built by general contractor Findorff in collaboration with a talented team of theatre professionals. The facades are completely removable, like a stage set, and do not affect the structure of the branch. Because the project leaves the existing structure and walls of the branch intact and uses theater-set building materials, it is a cost-effective way to test an experiment that may be abandoned later.

If the project is deemed successful, Summit plans to deploy the concept at other branches, rotating elements from one location to another about every 18-to-24 months.

“As a member-owned cooperative, we believe we have an obligation to try new things to support our members’ financial wellness,” adds Sponem. “We know that visual reminders of goals and engaging environments support commitment and stimulate new thinking and action. The inspiration branch helps to build cooperative value for all our members as they envision and realize their dreams.”

“When I started my career with credit unions, I heard that we weren’t going to need branches anymore because of ATMs and debit cards, and all those types of things,” Sponem says. “And while mobile has taken off, I don’t see it completely replacing the branch.

Summit Credit Union is a member-owned financial cooperative open to anyone in Wisconsin. Summit has $1.8 billion in assets, 23 locations and more than 125,000 members.