Subscribe Now Get The Financial Brand's FREE Email Newsletter
The use of pop-up branches by financial institutions is a means to test new permanent branch locations, provide low cost transactional support and to supplement special event engagement. To increase awareness of the introduction of Apple Pay, Wells Fargo used their pop-up branches to generate traffic and provide localized training.

The key to Apple Pay success for financial institutions is to get a bank’s or credit union’s card positioned as ‘top of app’ within the Apple Pay ecosystem. With this in mind, Wells Fargo and Visa wasted no time to introduce their Apple Pay partnership to customers and prospects as they took to the streets of San Francisco and leveraged Facebook, Twitter and LinkedIn in a guerrilla marketing initiative that all banks and credit unions could learn from.

Coordinated to coincide with the nationwide rollout of Apple Pay on October 20, Wells Fargo began their social media communications plan on October 17, using their Facebook page to announce the use of their mobile pup-up branch trailers. They mentioned that there would be pop-up branches at high traffic Union Square and Embarcadero locations where giveaways would be distributed and training would be provided on how to use Apple Pay. 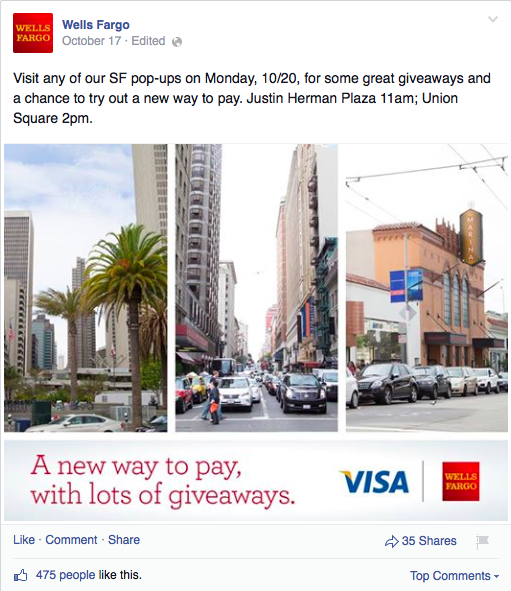 Visa contributed to the build-up of the October 20th event by mentioning the Wells Fargo Apple Pay promotion on their Twitter site (which has 228K followers), subsequently retweeted by Wells Fargo to their 122,000 followers. To build momentum, the chance to win one of ten $500 gift cards for early arrivals was mentioned. Using channels such as Facebook, Twitter and LinkedIn helped to reach the digital consumers and young professionals who would be classified as ‘early adopters’ of mobile payments initiatives such as Apple Pay. 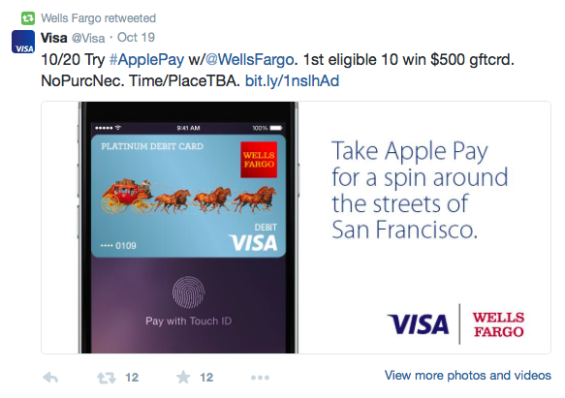 On the official Apple Pay kick-off day, social media engagement on Facebook, Twitter and LinkedIn was in full force, timed to coincide with the opening of the two Wells Fargo pop-up branches. These heavily branded mobile branches had several staff members available to pass out giveaways and to show how Apple Pay worked.

Each of the social media mentions promoted Wells Fargo, Visa and Apple Pay. 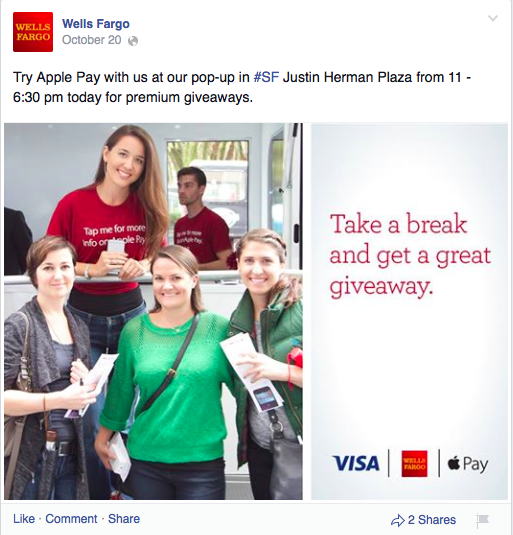 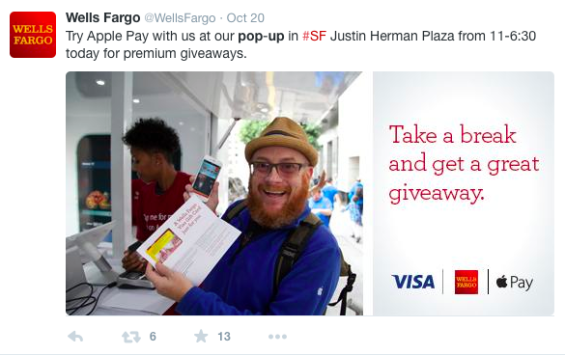 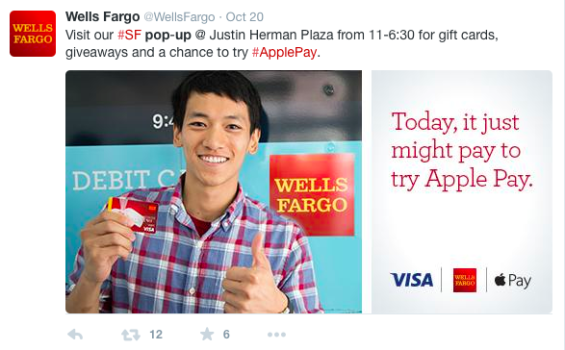 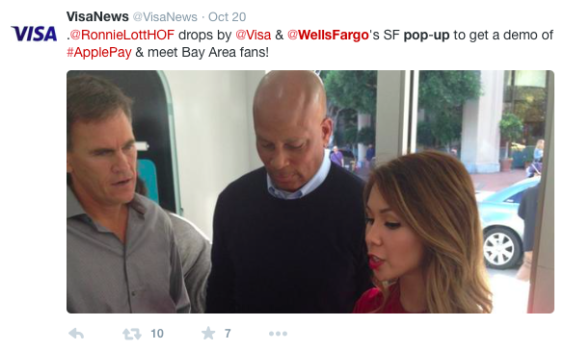 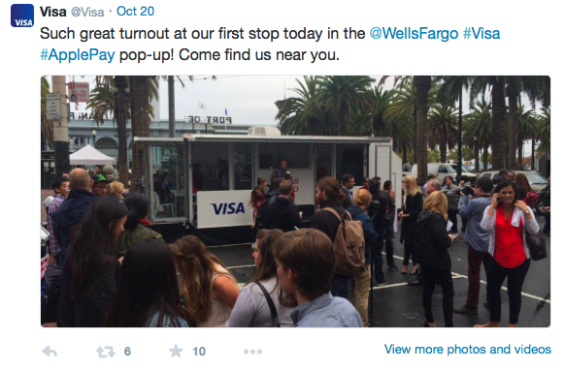 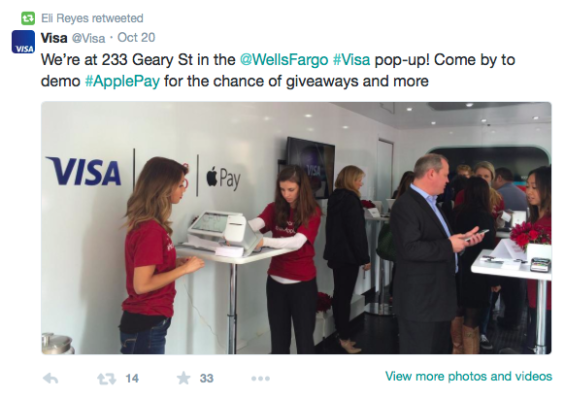 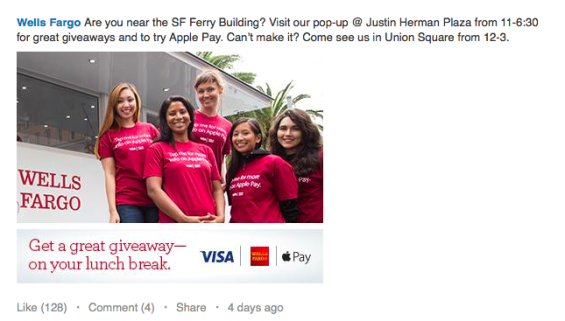 As the promotion took place at the two Wells Fargo pup-up branches, customers proceeded to mention the event on Twitter, increasing the exposure of both the mobile pop-up offices and the Apple Pay promotion. By including celebrities (including mascots) with the promotion, foot traffic and social shares of the event increased. 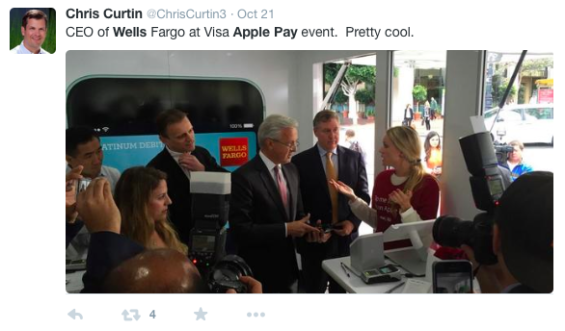 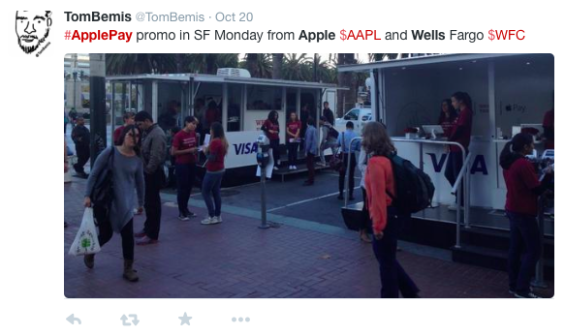 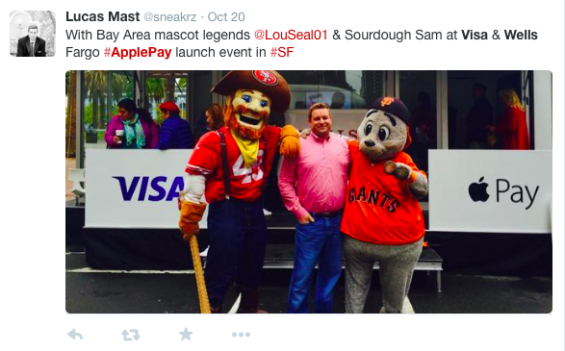 Not content with just heavy social media exposure and street level marketing, Wells Fargo upped the ante by offering credit card customers $20 to sign up for Apple Pay. Debit and prepaid customers will get $10 to sign up with the money appearing on the customer’s statement “within 1 – 2 billing periods following your qualifying Apple Pay purchase.”

“Use your iPhone 6 to make an Apple Pay purchase with your Wells Fargo Credit Card by November 30, 2014, and you’ll earn a $20 statement credit,” Wells Fargo said.

While not as quantifiable of a measure of success as new accounts opened or cross-sales made, the combination of social media and guerrilla marketing by Wells Fargo and Visa as part of the Apple Pay introduction did increase the number of Facebook ‘likes’ by more than 25% for the week of the promotion with a definitive spike in positive engagement right after the promotion. 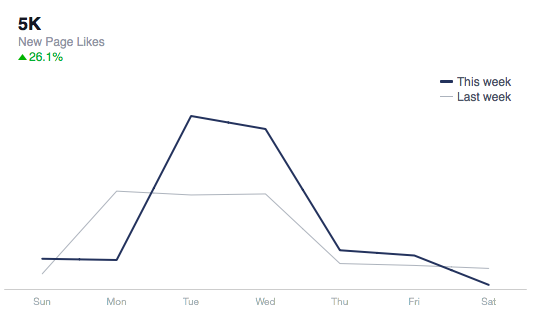 Finally, the addition of a monetary incentive heightens the awareness of the new product introduction and increases the number of customers able to use Apple Pay. It is believed an additional incentive will be needed to increase use of the service.

The potential for utilizing mobile branches in support of events is strong if done correctly. By combining social media, traditional media and heavily branded pop-up facilities, Wells Fargo built a synergy that would not have been possible without a coordinated effort. With low incremental cost, this form of guerrilla marketing can be done by virtually any organization.