The employees working in a Seattle branch of First Mutual Bank recognized the man immediately. They’d seen his photo on a flier from the FBI and knew he was a suspect in previous bank robberies.

Instead of waiting for the man to rob them, the bank’s employees snapped to action. But they didn’t trigger any alarms, or call the police and run to the vault hugging each other.

They just started a conversation with the man by greeting him and saying hello.

The man left the branch without any money — and without incident.

You might think this is a silly way to thwart a would-be robber, but it works.

Twice in a row, as a matter of fact.

After the robber left First Mutual, a bank employee called a nearby U.S. Bank to give them a heads-up: the man might be coming their way next.

Sure enough, the guy walked into the U.S. Bank branch, but to his dismay, he confronted the same sort of friendly, personal service he found at the First Mutual location. So he left, empty-handed again.

Key Insight: Robbers don’t like good customer service. A personal touch coupled with questions about opening a checking account annoys robbers. Why? Because they would prefer to remain fully anonymous and unseen. And because good service doesn’t fit the branch experience they usually encounter. In a sense, good, personal service is so uncommon that it surprises robbers, catching them off guard. 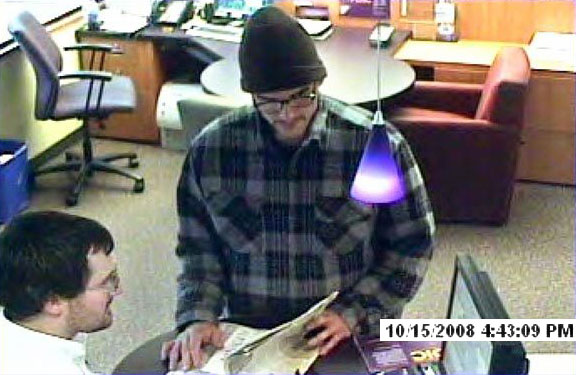 The would-be thief in this FBI image is a suspect in several bank robberies.

Carr worked with EHS Design, the financial industry’s leading architectural firm, to develop a complete strategy for secure branch design, something they call SafeCatch. NPR even did a piece about it last year.

Robbers will often “case the joint” before robbing it. If they walk in and are confronted with attentive staff who seem to be “on their game,” they’ll move on to softer targets. Remember: They’re after easy money.

Reality Check: You should be providing great service to everyone who walks through your branch door…no matter what — people with purple mohawks, 14-year olds, even guys with sunglasses and hoodies. If not because you want more business, then at least for the safety of your employees.

You don’t need to turn your branches into medieval fortresses to prevent robberies. A branch built like Fort Knox undermines your ability to ability to provide warm, friendly personal service.

Who knows, a greeter might be a more effective method of preventing robberies than having an armed security guard. One thing is for certain: greeting people with a friendly handshake, a genuine smile and a warm hello definitely helps create a positive brand image — especially among your law-abiding branch customers.