Subscribe Now Get The Financial Brand's FREE Email Newsletter
Will the future of retail branches be dominated by Amazon-style self-service digital technologies? Or will banks delivering a phenomenal experience like Starbucks win the war?

Seattle is a hotbed of retail innovation. It’s the home of more conventional retailers like Nordstrom, Costco and REI, as well as more contemporary retailers like Amazon and Starbucks.

During my last trip to the Emerald City, I was particularly interested in visiting the new Amazon Go store. It’s not just that Amazon is shaking up the grocery industry, but that almost every week my inbox is inundated with new articles on the threats Amazon poses to almost every sector in the economy, including (if not particularly) banking.

I had eagerly wanted to see some amazing new Amazon technology, but a stop for coffee at one of the new Starbuck’s prototypes convinced me that the direction for retail banking is likely to look more like a Starbucks Reserve than an Amazon Go.

The Tech-Centric Store of the Future

Amazon Go is a totally self-service convenience store. From a technology standpoint, it’s amazing… and a little scary.

It’s a relatively small space — about the size of a typical convenience store — located next to Amazon’s headquarters in downtown Seattle. You enter by scanning the Amazon Go app on your phone, similar to the way you’d use a keycard for entry through subway gates or into your bank’s headquarters. From there, you just pick what you want off the shelves and put it in the free bags provided and walk out the door like you were a shoplifter. A few moments later your credit card is charged, and the receipt is in inbox.

Here’s what makes it amazing… and a little creepy. Every move you make in the store is tracked. Big Brother Amazon knows when you picked something off the shelf, or even if you changed your mind and put it back. If you scanned in a guest (like using a key card to enter someone with you), Amazon knows they are associated with your account even though they may be shopping in a different part of the store. The wine and beer section is the only place you need to identify yourself, where you are required to present a valid ID.

All of this is totally unobtrusive. You have to look hard in the ceiling to try and pick out the scanners and sensors, and even then, you can’t be sure what you’re seeing are acoustic tiles or tracking devices.

As Amazon opens more stores, what will they do with all the data on how you and I shop? But just the fear of what they might be able to do with this data and their analytic prowess has already shaken up the grocery business. Here in Austin where I live, and where Whole Foods is headquartered (now proudly promoting itself as an Amazon subsidiary), we have already seen the change in subtle ways. For instance, delivery is promised in two hours. Amazon lockers are in the store for product pickup. Discounts tied to Amazon Prime membership are rolling out. A new Amazon bookstore, using self-service technology somewhat similar to what you see in their Go model, is now open. And local competitors are scrambling to offer improved delivery and other amenities in anticipation of more to come. 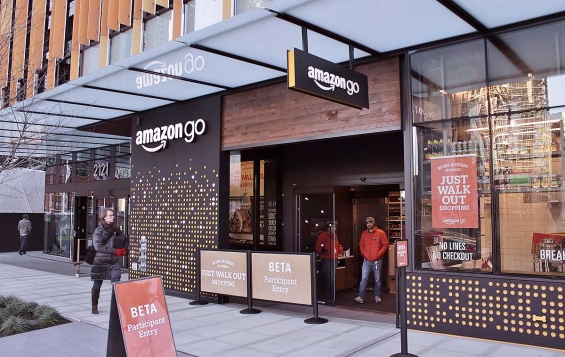 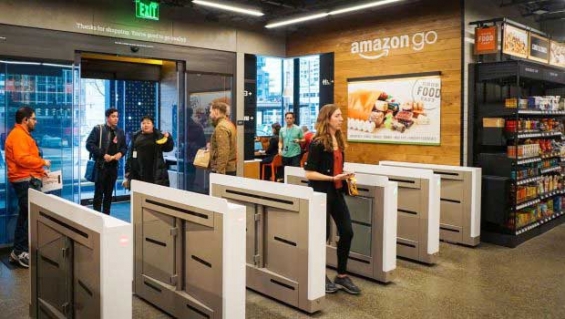 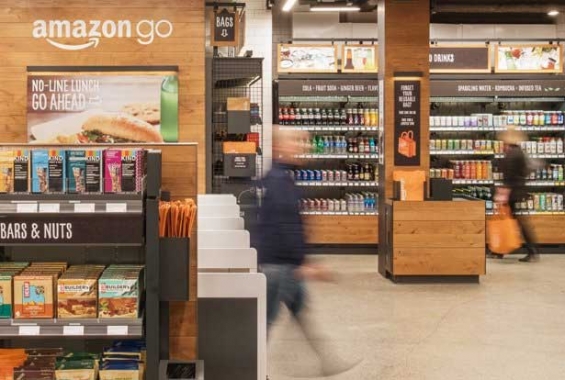 Retail Theater and The Art of the Experience

If Amazon is all about self-service technology and digitally-powered efficiency, Starbucks is all about the experience. There is no rush to do it yourself and move on, but rather an effort in the opposite direction — more reasons to linger, hang out, and interact.

I’ve now visited the Roastery several times. It’s massive compared to the typical Starbucks format; at 15,000 square feet, it’s truly a flagship store. Coffee is roasted on-site in large, gleaming copper roasters connected with transparent tubes, so you see the beans moving through their journey. You are engaged in the process, with staff on-hand to interact with customers and answer questions.

But there’s more. Coffee merchandise. A full bar. A bakery and small restaurant, in collaboration with Italy’s Princi. Most of these elements are replicated in the Reserve, which seemed like a smaller version of the Roastery (without the on-site roasters).

This is a place to visit and stay, not grab a cup of coffee and go. People were there for dinner, for dates, for drinks after work. And the layout facilitated interaction between staff and customers. Coffee machines were set into the counters facing forward, and set below eye level, so baristas always had face-to-face contact with customers. Coffee was served to you — they took our order on a tablet while we were looking around and found us to deliver our drinks when we sat down. 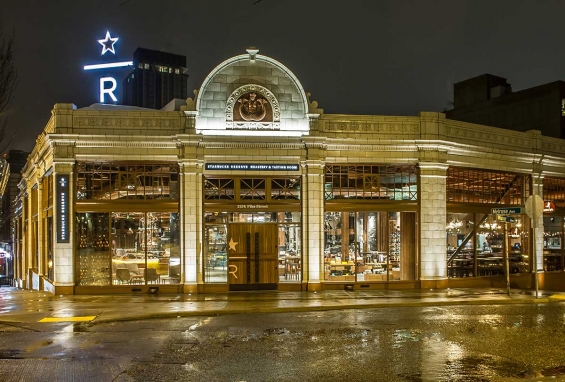 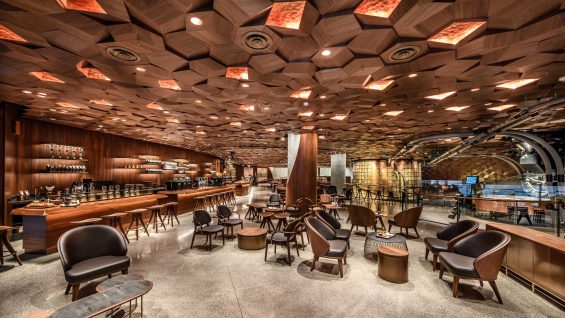 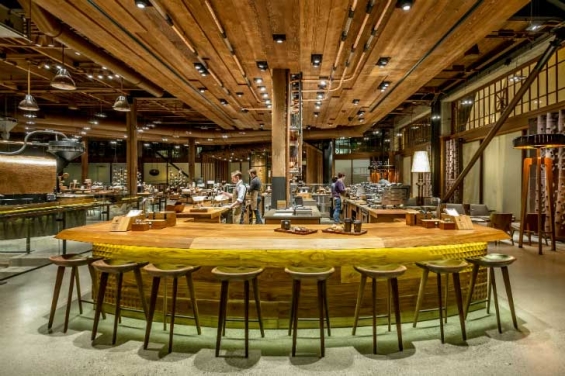 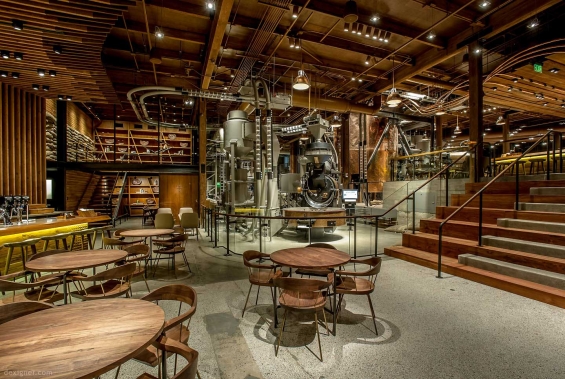 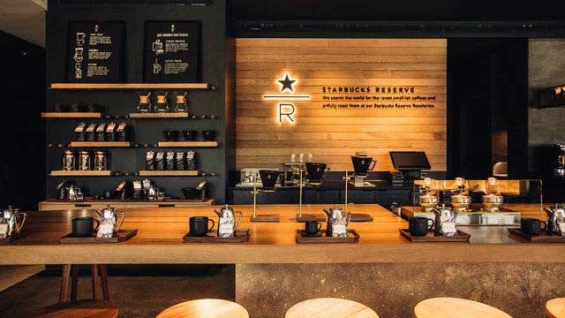 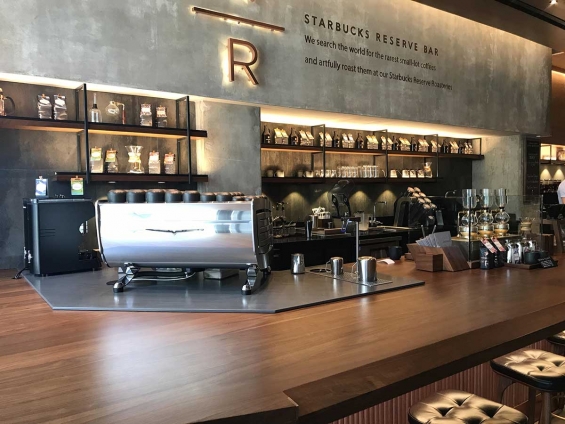 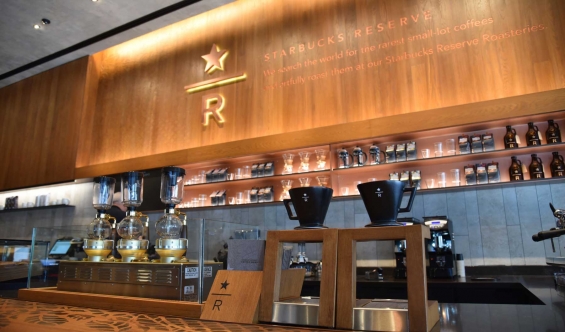 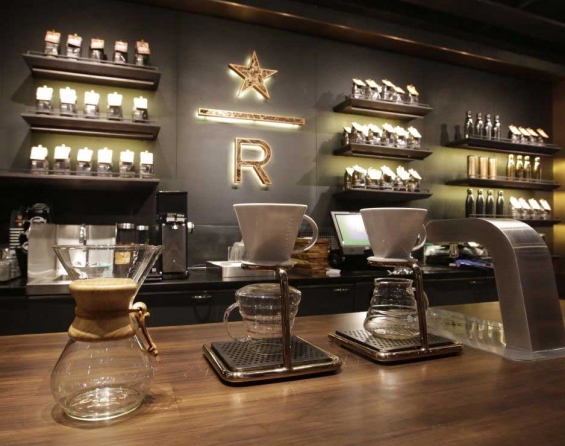 Which Model Will Prevail?

In certain ways, both.

Amazon has done an incredible job removing friction from the buying experience. Those who think it is just about pricing are dead wrong. Amazon’s prices, especially with the cost of Prime included, are not necessarily cheaper. But it’s easier and more predictable. One click and done. It’s on your doorstep, sometimes the next day. With whatever Amazon model you choose, it’s a smooth transaction, but not one you would typically describe as bringing joy and delight. It’s just efficient.

Starbucks, on the other hand, has managed to deliver a consistent process across some 21,000 retail stores — one that’s engaging, immersive and enjoyable — and that’s no small feat. They pay particular attention to what retail strategists describe as “the last 10 feet,” the end of the supply chain where the coffee gets handed to the customer. In banking, we call it the “choreography of the branch”, or what happens when the staff interacts with branch visitors.

Bottom line? Amazon may score big points for generating a ton of buzz for the “hot new thing”, but Starbucks delivers on retail performance. Amazon is “checking into checking accounts”, but Starbucks’ mobile payments business is already larger than Amazon Pay and Apple Pay.

I went to Amazon Go and made a test purchase (Aardvark hot sauce from Portland, Oregon — it’s great, try it!). It looked to me like everyone else in the store was either taking pictures or testing the technology. I went to the Roastery and the Reserve, bought the most expensive cups of coffee ever, thoroughly enjoyed it, stayed for an hour, and then bought more food and merchandise.

Technology is rapidly changing the face of all retail, including banking. Maybe, because of Amazon’s R&D, we’ll soon see the day when grocery stores don’t have checkout lines and banks don’t have tellers. But retail relevance is not just a function of operational efficiency and cost reductions, but rather the result of creating an experience that engages customer, creates a relationship, reinforces your brand, and generates deep and sustained involvement.

As an industry, banking is still in the business of providing a physical buying experience for the majority of consumers. Some argue that’s because we haven’t figured out a way to make it simple to do it any other way, and they argue that is destined to change. I believe that’s a long way off — not in our immediate future.

My visit to Seattle reinforces the belief that at — least in banking — technology is best placed behind the scenes, in the service of making the physical experience better.

People need banking, but they don’t necessarily need banks. If we mechanize the process to the point where the experience is sterile, why would people ever need us?