Subscribe Now Get The Financial Brand's FREE Email Newsletter
Is it any surprise that banks see less traffic and close locations when they've been fumbling around with “branch of the future” concepts and failed retail strategies for decades?

Over the last 20 years a whole range of banking industry observers have denigrated the role of bricks and mortar in retail channel strategy, proclaiming its imminent redundancy. The understandable plateau in US branch network growth — up 25% since the start of the millennium — has been misinterpreted as a sign of an impending apocalypse rather than the inevitable reaction to a struggling economy.

It could be that if the doomsayers continue for another 20 years they may eventually be proved correct. However, for the time being, the serious players in retail banking are heavily focused on creating the optimum delivery channel strategy for the next generation of investment, and all evidence tells them that the branch is still the lead channel — for bankers and customers alike. Much of the anti-branch hyperbole seems to reflect an incomplete knowledge of both the real strategic issues, critical success factors and the hard practicalities facing retail banking executives.

Another school of thought has stridently proposed that bankers should be “more like retailers.” In many markets, this fallacy has resulted in the institutionalization of the word “store” in favor of “branch.” But which of the many different retailers are the bankers to copy? Grocers? Jewelers? Department stores? And how does this “retail” approach take full account of the expectations of the bank’s target segments?

The many experts offering these ideas usually fail to produce ways in which adoption has delivered the promised “silver bullet.” Indeed, one of the sad consequences for those who bought into the pro-retailer hype has been wave after wave of disappointing “branch of the future” projects. Yes, there are areas where bankers can learn something from retailers, but it’s no panacea.

An increasing number of bankers believe the hospitality sector may have even more relevance, more lessons to offer than the retail sector. Many financial institutions are using a thoughtful and effective approach to make their branches a more comfortable and engaging place. In turn, this counteracts the growing tendency of customers to use other channels. Jyske Bank in Denmark distinguishes itself by its sustained commitment across many years, based on a creative and thoughtful approach to branch design. 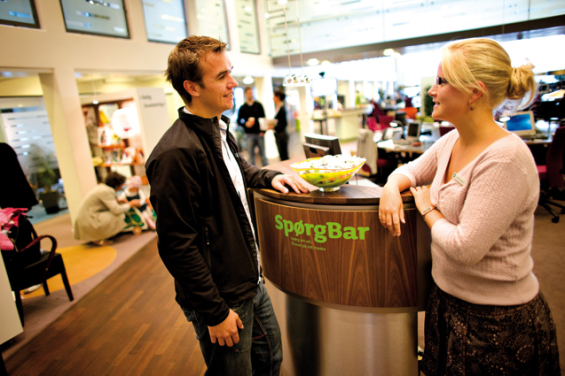 Jyske Bank. Customers are greeted by a concierge at the AskBar/reception area and are encouraged to wander around the different areas of the bank. They can pick up free coffee from the CoffeeBar, inspect products in the Market Square area, or just relax in the Oasis area. 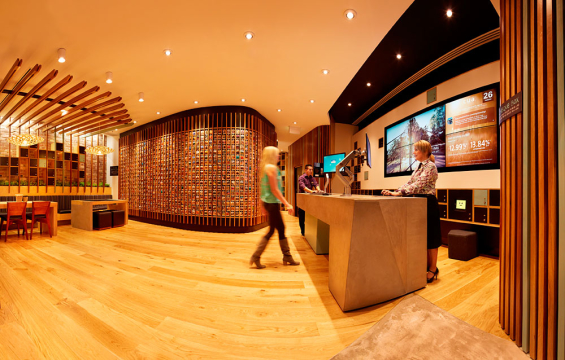 Credit Union Australia (CUA). After building a life-size prototype of its new branch concept — out of cardboard! — Australia’s largest banking co-op rolled out its vision for the future, including roaming concierges and an herb wall.

The recent Carindale branch by CUA in Australia provides an example of a similar trend among the global credit union movement. And in New Zealand, the well rounded delivery strategy and new branch concepts developed by Kiwibank provide established players with stark evidence of the growing threat from the global post bank sector. It is a branch-led threat that is also emerging strongly in other parts of the global market.

Amongst the major banking groups, both Barclays and ING continue their long term investment in the branch experience. ING in particular has an innovative track record that has essentially obviated the need for any “branch of the future” project.

Success has also come to many banks through developing a better understanding of the lifestyles, expectations and needs of key target segments. While everyone seems to know that “one size doesn’t fit all” in the world of branch banking, the industry’s response has been spotty and limited. There are a growing number of institutions, however, that are addressing the issue very effectively. The positioning of Deutsche Bank as a premium brand has been further strengthened by its retail concept. This now offers a customer experience deliberately designed for those who qualify, or wish to pay for a premium banking service.

The German Postbank has an equally distinctive approach to branch design, amply meeting the organization’s aspirations to compete in the domestic mass market. A desire to build a share of the valuable mass affluent segment in Vancouver and the region has been the driver for the highly creative approach taken by North Shore Credit Union when creating its Financial Spa.

In Asia Pacific, the young people of Singapore, and especially the better educated, are seen by two local banks as a particularly desirable target segment that justifies a tailored strategy. DBS has sought to leverage the opportunity by working with young people through a competition inviting them to design their own bank branch. The result was the launch of the DBS Remix branches with both banking and futuristic social facilities. On the other hand, a dedicated branch format launched by OCBC as part of a proposition called ‘Frank’ has been developed through taking the time to live amongst the targeted young people and better understand their lifestyle and aspirations.

In Bulgaria, UniCredit Bulbank has responded to the growing role of women in society with a tailored product and membership proposition, sub branded as Donna. All the branches fitted with the distinctive Donna zone are staffed with highly trained female relationship managers because that is what the target segment said it preferred.

A growing contributor to success has been the work undertaken to make the branch better project and represent the institution’s brand. The relaxed and distinctive branches of Jyske Bank provide a well established example. The overall ambience that has been created, including such items as the choice of language in naming branch facilities, are all designed to reflect the qualities that have distinguished the brand so successfully in a very competitive market. Across the industry, there is now an increasing understanding that brand is about values, not just image, and that all aspects of the branch should be aligned to reflect these.

Work undertaken by Westpac New Zealand also reflects much that is now understood to drive success. Smaller footprint branches are being rolled out as part of a Westpac Local strategy with a mandate to become part of the local community. The new, well presented branches incorporate a broad range of self service functionality to serve the everyday needs of both personal and local business clients. The bank’s approach also reflects the growing industry recognition of the need to deploy staff capable of originating and sustaining customer dialogues, and thus developing relationships. The concept of the concierge is becoming established in retail banking, and fits well with the approach of Westpac branches where staff are now freed up to deal with the customers as they conduct their own transactions.

Indeed, most of the banks discussed in this article have recognized the critical need for relationship development staff with strong inter-personal skills and sound professional knowledge. This includes the banking arm of Belgium Post who have been committed to high quality staff skills for many years. North Shore Credit Union has talked openly about how they seek to recruit experienced staff from the major players, and look for such qualities. Whilst UniCredit Bulbank staff operating the Donna service for women are now given both inter-personal and psychological training.

The debate that has surrounded the role of the branch in the 21 century should not be based on the playground language of dinosaurs versus progressives. Rather, it should be based on sound and creative marketing, best practice in design and operation, and the creation of a customer experience that is conducive to building relationships. Such an approach is not rocket science, it simply demands professionalism. The basic principles and best practice are now well understood. And professional management of the branch network assets will always ensure that the retail banker is well placed to optimize the return on their investment .

Many of the bankers and markets that are reporting a decline in customer branch visits should hardly be surprised. Branch customers are still being faced with an unwelcoming transaction-shop environment, staff with poor interpersonal skills, and clumsy corrosive sales tactics, Even the rigors of call center IVR must seem like a better alternative. And it is sad to note that branch closures are so often the consequence of a bank that has simply been unable to apply best practices to the operation of its most important delivery channel.

On the other hand, there is now cause for cautious optimism. So many recent development projects are showing the value that a new generation of smart retail bankers have brought to their branch networks in different parts of the global market. And there are certainly many more institutions whose development work could have been mentioned in this article. In summary, all of them have recognized that the objective should be to create a branch that their target customers actually want to come to…. and build a profitable relationship with.