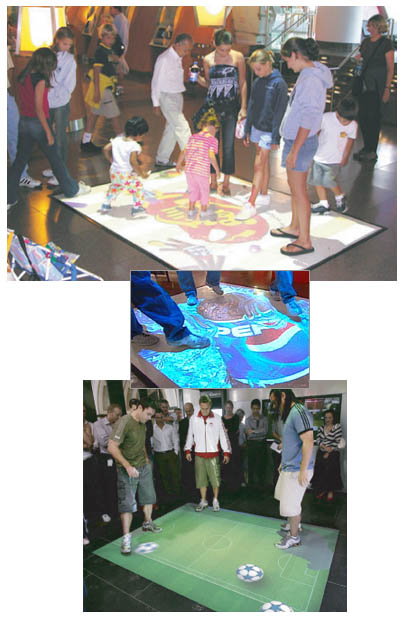 This isn’t your typical “interactive advertising” (as in the “online” kind). The credit union has teamed up with Reactrix, a company specializing in interactive video floor displays.

Reactrix produces “highly entertaining branding displays that respond to the physical movements of the audience.”

Similar to dragging a mouse, the elements of “Island Paradise” are highlighted and a narrative of each pops up to reveal the story of the landmark and its importance to the San Diego and Riverside communities.

Earlier this year, North Island Credit Union updated its signature mural artwork to reflect 20 new landmarks and sites from San Diego to Riverside. The original artwork, known as the “Polymorphous Paradise,” was created in the 90’s and has been used in North Island’s advertising and marketing programs. The new “Island Paradise” artwork will be incorporated into the credit union’s print, collateral and affinity items over the next few months.

The Reactrix installation for North Island can be seen at numerous venues throughout San Diego.

There are a number of YouTube videos showing people interacting with Reactrix displays at various locations throughout the country, and this very good 3:30 news piece.

Reactrix calls this technology “brand play.” On its corporate website, the company holds no punches when comparing its brand-building potential to that of traditional media options such as print, TV and outdoor. There’s also a good video showcasing the system at the Reactrix website. The company seems to get a lot of press coverage, with many articles in the last 90 days.

Bottom Line: It’s cool. And fun. If you want people to come to your branch who would never do so otherwise, install one of these things. But be prepared for sticker shock. This can’t be cheap.

I first saw this technology at Global Shop in Chicago a few years ago. It’s sticky. I couldn’t stop playing with it. After 30 minutes of kicking virtual ‘things’ around the floor, I started thinking of financial institutions. The range of in-branch applications is pretty exciting (think: kids area, for starters).

Tip of the Hat: To North Island Credit Union for having the courage to embrace a new and exciting medium.

Another Tip of the Hat: To Reactrix, for having a killer product, but more importantly, for understanding the importance of branding. And not just their customers’ brands…their OWN brand. They GET it. They are telling their story very well. Even better, there are thousands (millions, counting consumers) of people – including me – spreading their story for them.