PNC expects the “net-zero energy” branch to exceed all LEED (Leadership in Energy and Environmental Design) Platinum certification requirements. The 4,900 square foot building could be the most energy efficient bank branch ever built, using 50% less energy than a typical branch.

“There is a very good chance that we will actually be selling energy back to the grid and produce more energy than we are using,” PNC director of realty services Gary Saulson told the South Florida Business Journal.

Features of the Net-Zero Energy Branch

Solar Energy & Daylight Harvesting – The branch will be powered by the sun using the most efficient photovoltaic (solar) panels on the commercial market. Daylight harvesting will be achieved through the use of sensors that control dimmable light fixtures as natural sunlight increases.

Energy Recovery Ventilation – This system captures and transfers energy from conditioned air as it exits the building to fresh air as it enters the building and results in reduced cooling costs.

Recycled Building Materials – PNC is using local and recycled building resources for structural and shell materials, as well as finishes. Special products made with more than 80 percent recycled material have also been selected for all ceiling tiles and walls.

Solar Shading – A canopy covers the building’s southern exposure to reflect sun during the hottest part of the day while allowing natural daylight into the building, resulting in reduced cooling costs.

Some of these features may become standard in the next generation of PNC’s green buildings.

These and other features will yield annual energy savings equivalent to the energy needed to power a 1,600 square foot house for one year.

PNC won’t say how much more their green branches cost than regular retail banking facilities, but Saulson says it is a nominal and not substantial increase from the cost of building a typical LEED-certified branch.

“There is a payback on everything that we are doing,” Saulson said. “We don’t do things that don’t make financial sense.” 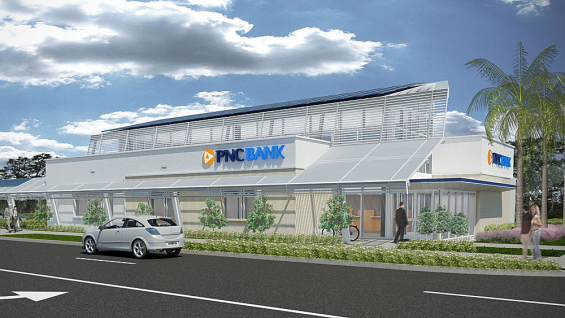 PNC built the financial services industry’s first LEED Gold green building, and claims to be the first U.S. bank to apply green building standards to all newly constructed or renovated retail branch offices. PNC has more newly constructed LEED-certified buildings than any company on earth —  118 to date, and counting. PNC has a special page on its website celebrating the way the bank differentiates itself with green branches.

With 1,500 employees, PNC’s Pittsburgh operations center was the largest LEED-certified green building in the world when it opened in 2000 PNC says employee retention and satisfaction is as much as 50% better than traditional facilities.

Existing buildings on the site of all new major construction projects will be “deconstructed” rather than demolished to salvage or reuse more than 90 percent of materials that otherwise would go to landfills.

For the new Fort Lauderdale location, PNC Bank collaborated with Gensler, a leading global design firm, and with the Department of Energy as part of their Net-Zero Energy Commercial Building Initiative, which aims to significantly improve the energy efficiency of new and existing commercial buildings. Gensler has worked with PNC since 2006 and is the design architect, while Paladino & Company has worked with PNC since 1998 serving as sustainability and green building consultant.