FirstBank’s next branch won’t have a traditional teller line. Instead, the bank will have what is known in the financial industry as “teller pods.” Teller pods were introduced into the mainstream by WaMu (shown at right – click on image to enlarge).

When customers enter the bank, they will be greeted by a bank employee and taken to a “dialogue pod” (which is what FirstBank calls them), where they will conduct their business standing next to tellers.

“This is not your typical bank office. And that’s on purpose.” – Sam Jones, FirstBank President

The 4,200 square foot space leaves room for the bank to grow from one “dialogue pod” to two and add more offices.

In this podcast, FirstBank president Sam Jones says the pods give the bank’s lobby an open feel and removes the barriers between customers and tellers.

“The concept is very customer friendly,” Mr. Jones said. “It has been the trend in consumer banking for the last three to five years.”

The bank’s interior will be colored in earth tones with large plasma TVs in the lobby. 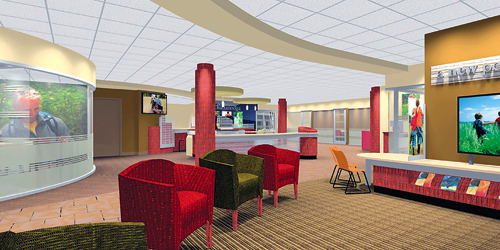 This will be the bank’s 44th location.

The bank also plans to open a second branch this spring in a former Tennessee Valley Federal Credit Union building on Hamilton Place Boulevard. That branch also will have the new pod-style lobby design.