Subscribe Now Get The Financial Brand's FREE Email Newsletter
Mobile banking has taken off, but the gravy days are over and adoption rates have plateaued. Getting more consumers to abandon branches in favor of mobile will now take serious work.

When mobile banking first started rolling out, adoption rates skyrocketed. But according to research from Bain & Co., the growth of mobile usage has plateaued.

In a survey encompassing 137,000 consumers in 21 countries around the world, Bain found that growth in mobile banking is leveling off in many countries, and actually declined in China.

This suggests that those who were naturally inclined to migrate — early adopters like Millennials — have already done so. Now that all the low-hanging fruit has been plucked, there is only one type of consumer left to convert: branch users.

“The banks were able to get the early adopters,” says Maureen Burns, a partner in Bain’s financial services practice. “The next wave needs more work.”

Banks and credit unions have a big incentive to figure out how to get branch users to make the digital shift. Bain estimates every interaction a consumer has with a teller or call center agent costs the institution $4, whereas mobile interactions only cost 10¢ each. Bain also figures that reducing branch and call center usage could save $11.4 billion a year among the 25 largest US banks alone.

“Digital self-service is much more cost-effective for banks — about one-tenth the cost of a teller visit or live phone call,” says Gerard du Toit, head of Bain’s Banking Practice. “But U.S. banks have a long way to go to realize the promise of digital self-service.”

Bain says that nearly three-quarters of branch transactions and more than half of phone interactions deal with deposits, withdrawals, checking one’s account and other routine matters that could be better handled through self-banking at less expense to banks. Migrating consumers to digital channels could reduce the routine transactions that add costly volume in branches and call centers.

It’s tempting for banks and credit unions to achieve cost savings by closing branches. Since 2010, the retail banking industry has shuttered between 1,000 and 1,750 branches annually. Many of these closures can be attributed to one of two factors: mergers/consolidation, and the adoption of mobile banking.

But if financial institutions want to continue on this path and close more locations, they’ll have to find new ways to get branch traditionalists to switch to mobile — not an easy task.

Here’s the problem: You can’t just close a branch and hope that people will adopt digital- and self-service solutions after the fact. Closing branches before consumers have migrated to mobile creates a very real risk that branch users will simply move to another bank with a nearby location.

Closures can have ripple effects, depending on how the institution handles the transition. Bain found that nearly one-third of U.S. consumers and roughly 40% of consumers worldwide either switched banks or started using another financial institution for new banking products after their main branch closed. Consumers who experienced a closure said they are 11 percentage points more likely to switch their primary bank in the future.

Who Are These Branch Users Anyway?

Nearly 90% of the US consumers surveyed by Bain said they visited a teller during the prior quarter, and nearly half called their bank. The number of teller interactions in branches are consistent for consumers of all ages — about 1.2 interactions per month, whether you’re a Millennial or a Boomer.

Transaction volume in both branches and contact centers tends to be driven largely by a small group of frequent users — “heavy users” deﬁned as four or more teller interactions and three or more phone interactions per month. In the US, 18% of consumers are heavy branch users, and 5% are heavy call center users. 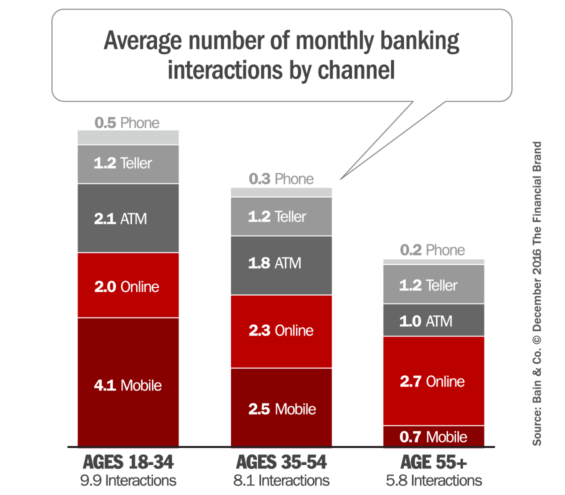 The composition of heavy users may surprise bankers. For example, heavy users of traditional channels such as tellers do not skew older, but rather about the same age as light users. And heavy phone users actually skew younger.

While four out of five Millennials have adopted mobile banking, 86% have still visited a teller in the last three months and 60% have called the contact center. Millennials may be more familiar with digital and mobile technologies. But they complain that digital channels are confusing or inadequate for banking, and they often need help. Among the heaviest teller users, for instance, 42% of Millennials tried using another channel before visiting the branch.

Among those 55 and older, only 42% contacted their bank via phone. Millennial consumers call more frequently — 1.4 times over a three-month period vs. older consumers at only 0.5 times.

Bain notes that the drivers of brand loyalty in banking have shifted in recent years from “friendly service” in branches to other attributes, particularly simplicity and convenience. And those features depend largely on creating strong digital channels, then teaching customers how to use them.

Bain says this constitutes a sea change for banks, particularly for midsize or smaller regional banks that have relied on local knowledge and branch service to attract and keep customers.

So what’s preventing more consumers from adopting mobile banking solutions? Some don’t own a smartphone or tablet, but that excuse doesn’t apply to many Millennials — only 4% admit they don’t have a mobile device. One in five seniors ages 55 or older don’t own a mobile device, but that isn’t the main reason most haven’t migrated to mobile yet.

Consumers who do not use bank mobile apps report several reasons, most notably habit, but also lack of knowledge and access issues. While older consumers are less than half as likely as the youngest consumers to use mobile devices to do their banking, they are about as likely to bank online. Bain says this suggests that they are willing to embrace mobile technology under the right circumstances. And when older consumers do use smartphones or tablets to bank, they rate the experience highly — even higher than younger consumers. 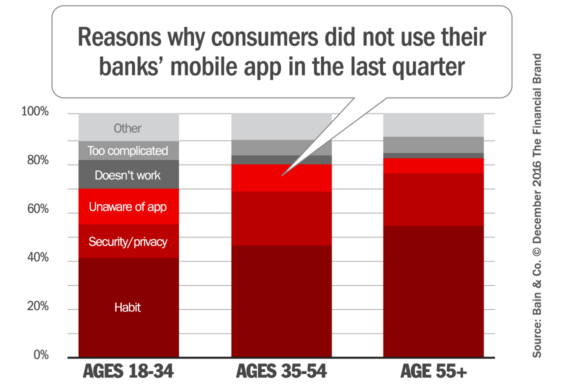 Many older consumers require active guidance and information from banks about using mobile apps. Boomers have deep banking experience, but they are often less familiar with digital technology and need additional support grow comfortable with self-banking. Yet only a mere 17% of older respondents in Bain’s research said they have received any guidance or training on how to use their bank’s mobile app, compared to 26% of younger respondents.

Younger people present a separate challenge, mostly involving the basics of banking. They are still navigating how to pay bills, deposit checks, transfer money and generally resolve issues with their accounts—and they generate more interactions in the process. For instance, if younger consumers don’t know how long it takes for a balance to update after a transaction, they will be more apt to phone the call center several times.

“Banks are missing a major opportunity to teach young consumers how to bank and older consumers to use digital channels,” Gerard du Toit, who leads consulting for banks in the Americas financial services practice at Bain. “Boomers in particular are ripe for mobile conversion. They just lack support and help from their banks to make the leap. Perhaps banks assume seniors are not interested or have decided that providing guidance is too much trouble, but they need to overcome their ‘unconscious ageism’ if they want to survive mobile disruption.”

Bain says banking providers should continue to streamline their online and mobile experience, so that consumers turn to digital channels before heading to a branch or calling the contact center. That requires designing simple and easy apps, and the how-to tips/advice and instructional guides that should go along with them.

Bain says banking providers should devise interventions by frontline branch and service center representatives that blend education with encouragement. They should also invite customers to try digital banking with the guidance of a trusted employee they know or have worked with.

According to Bain, banks and credit unions that take this approach can reduce branch and call center volumes by 20% in 12 months. For a typical US bank with 1,000 branches, the savings could reach $70 million to $80 million within a year.