Three out of every five banks have deployed digital signage solutions, and nearly everyone will do so soon. But how’s it working out?

In a survey of 204 retail and marketing executives from large- and medium-sized banks around the world, nine out of ten say digital signage is an “important” part of in-branch marketing. Two thirds of those say it is “very important.”

The “2013 Digital Signage in Retail Financial Services” study is based on annual research conducted by John Ryan, widely respected as a leading provider of retail marketing solutions and messaging systems to financial institutions in both U.S. and European markets.

About half of respondents said they developed a programming strategy prior to implementing digital signage. In the majority of cases, this involved a mix of bank and non-bank messaging. Approximately 1 in 5 financial institutions have chosen to exclusively run bank-centric messaging, while the majority (about 50%) balance bank to non-bank content at a ratio of about 3:1. A few financial institutions don’t run any content on their digital signage systems about the bank or its products.

Roughly 50% of all financial institutions said they felt “moderately satisfied” with their deployment of digital signage. Two in five were “highly satisfied, while only 5% expressed dissatisfaction.

Those who do not plan to implement digital signage say strategic fit, as well as up- front and ongoing cost, account for their decision.

While financial marketers cite message localization as one of the top 3 reasons for adopting digital signage, most have yet to do so. Indeed, the number of banks that are localizing messages has actually decreased since the last survey John Ryan fielded.

Approximately two-thirds of financial institutions target their digital signage messages at the branch level. Half will use region-wide targeting. Roughly 15% have content in another language in their message rotation.

Among banks that engage in message localization, half say they have faced challenges in doing so.

Only a third of banks update their messaging weekly or more frequently — down from about 50% from last year’s survey. 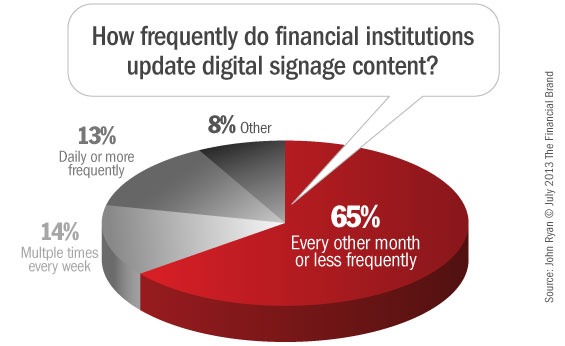 Message localization topped the list of frustrations, with nearly half of banks naming it as a key day-to-day challenge.

Daily management of a digital signage system requires anywhere from one to four full-time employees. In many cases, that is more than financial institutions had forecasted when embarking on their programs. 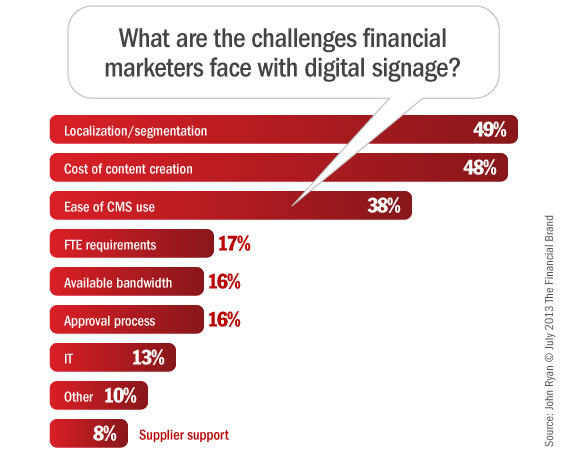 Social media has yet to influence digital signage content. No respondents reported using digital screens to convey social media feeds and less than 5% had explored integration of mobile devices.

To some extent, these findings parallel trends in retail. According to a recent study by ExactTarget, less than 10% of 100 Hot Retailers in the U.S. have begun promoting social media through in-store signage.