For years I have shared with colleagues in the financial industry my perspective that supermarket or in-store branches are a bad idea. It’s one of those topics that often sparks debate, and it tends to get me ranting.

For instance, ask CEOs and senior executives in the banking industry about their supermarket branch strategy, and here’s a sample of what they have to say:

As you can see, those who believe in the in-store strategy consistently like to stress two points: (1) supermarket branches are cheaper to build, and (2) supermarkets have lots of foot-traffic. Both statements are true, and that’s generally been the foundation for their appeal. But the problem isn’t cost or foot traffic. It’s lack of revenue.

Just think about what Christopher A. Williams of the Federal Reserve Bank had to say about supermarket branches over 20 years ago, back in 1997:

Many banks — large and small — have experimented with in-store branches over the years. I’ve worked for several banks that deployed in-store branches, and in every case where the bank exited its in-store program, another bank was waiting in the wings to take its place.

But let’s look at some facts:

The concept of efficiency is broadly used to evaluate how effective banks are in revenue generation. The efficiency ratio — the ratio of cost to income — is a quick and easy measure of an institution’s ability to turn resources into revenue. Remember that the theoretical appeal of supermarket branches is that they cost less to build and operate. The first part is absolutely true: the average supermarket branch is about 15% the size of a traditional branch, and only takes 25-35% of the capital to build.

Total operating expenses, however, are not reduced as much. Lease rates per square foot are higher, but since the size is small, the occupancy expense is much less than traditional branches. The real cost driver is staffing. These smaller branches don’t need a lot of staff, but they do need to cover longer hours and weekends to take advantage of in-store traffic, so bank and credit unions wind up having total FTE comparable to- or even higher than that of traditional branches. Add together the high lease rates and the long operating hours, and expenses end up running about 65-75% of traditional branches.

If the average branch deposit base (which serves as a good predictor of profitability) is only about a quarter of a traditional branch but expenses are 65-75%, how can this be a good use of capital — with the majority of the expenses, but only a quarter of the revenue? 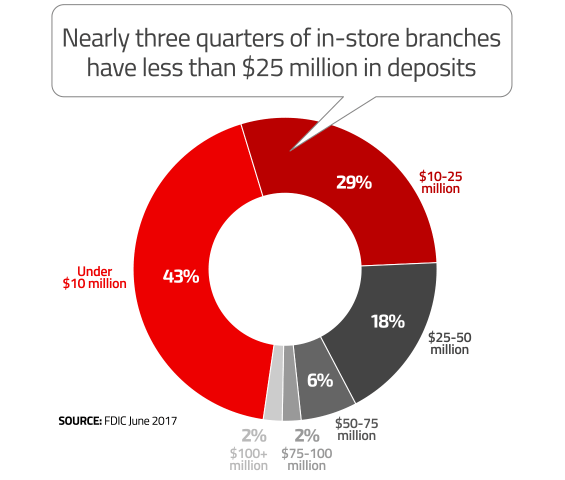 Reality Check: In-store branches average $21 million in deposits, but the average is misleading. Digging deeper, 43% hold less than $10 million, and 72% less than $25 million.

There are some banks that make in-store branching a key component of their retail strategy. According to the latest FDIC branch reporting, there are ten banks that operate more than 100 branches where more than 10% are in-store location. You might assume that they have figured out how to solve the in-store branch riddle. For these ten banks, the following chart compares their average deposits per branch for traditional branches vs. in-store locations. There are wide differences in performance. 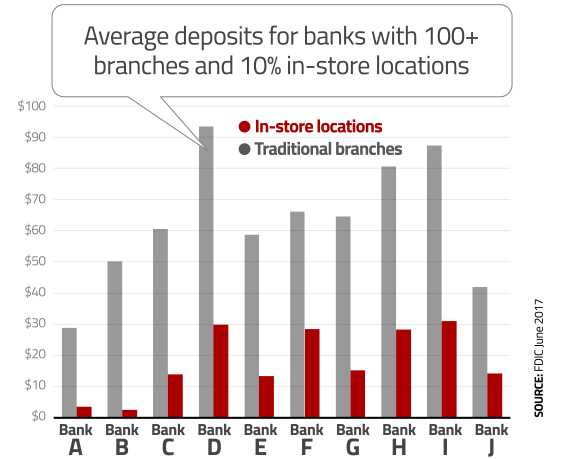 Bottom line? I don’t like in-store branches because they are rarely profitable, and therefore are a poor use of capital and an inefficient asset. They also carry some element of additional risk from partnering with grocery chains that can (and do) make store closing decisions on short notice, forcing the financial institution to seek regulatory waivers or scramble to find ways to serve their customers.

I’ve had colleagues argue that “not all in-store branches are bad,” and that “they work in certain situations.” Both statements are true. There are some instances where an in-store branch is the only way to serve a market, especially in some low- and-moderate-income neighborhoods. But the facts don’t lie. Most in-store branches — as they operate today — don’t deliver adequate returns, especially for the additional risks they present.

Can in-store branches be successful? One reason why in-store branches mature at such a low deposit base has to do with the typical in-store branch design. The spaces are small and often follow a traditional branch model. That means they have an ATM, teller line of 2-3 windows, and an office. It’s hard to pack much more into that tiny space. Most of the space is dedicated to serving customer’s transactional needs.

If in-store branches can work, but usually don’t, what should banks do to be successful? I’ve been thinking about alternative approaches to manage in-store branches. Here are my four suggestions:

1. Think small. If your space is small, and the purpose of the branch is to serve as a convenient spoke for larger branches, then organize the branch so it can be run with only 1-2 person serving as a concierge. Automate the teller line with full self-service ATMs. Use the concierge to help customers when they need it, and to do business development during slow times.

2. Thank large. Small space is a constraint, so don’t build tiny branches. What if the space were designed to have two offices, a freestanding teller station with TCRs (teller cash recyclers), and a deposit-taking ATM? That way there is more room for selling.

3. Think automation. In-store branches will always be small (just don’t make them too small), and that means having traditional roles like tellers will create inefficiencies that make the branch unprofitable. Change the focus of the branch from being a transaction site to more of an advice and sales center by automating the teller line so you can use universal bankers and maximize the space, and your staff utilization, for selling.

4. Think carefully. Yes, there is a role for in-store branches and they can be a successful part of your mix. But be very careful with the right markets, the right mix with your traditional branches, the right size, and the right configuration.