The high-tech branch bug seems to have spread to South Africa. Lately, the trend among those redesigning their branch experience has been to paint the walls white, leave the ceiling exposed, add hard flooring and cold laminates. Against this spartan backdrop, various high-tech toys are spread about — everything from Microsoft Surface interactive units to video conferencing.

Is the future of the branch centered around tech? It seems that banks are trying to use tech to lure people back into branches, but doesn’t (useful) tech give people greater physical freedom? Shouldn’t it untether them?

Using an iPad or iPhone, the augmented reality app overlays information on things within the branch. If you point a device running the app at any of their products (which are merchandised in boxes) the app “unpacks” the box on-screen to let you know what features that product offers. For instance, if you point the device at an FNB logo it brings up the history of FNB.

The branch also has a couple “Conference Cubicles” where customers can go for private video conferencing consultations, but you have to wonder: Why would anyone need to visit a branch to meet with their banker using internet video? Why couldn’t they just stay at home and use their own computer?

“dotFNB shifts the focus from traditional banking to digital channels in an ultra-modern store-type environment,” the bank said in a statement. 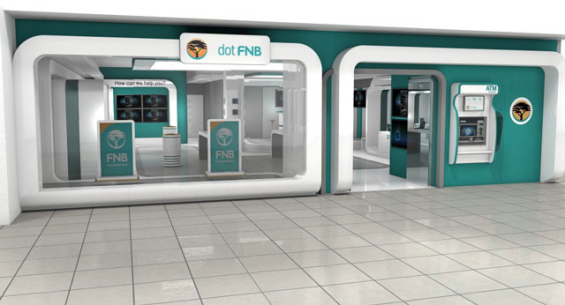 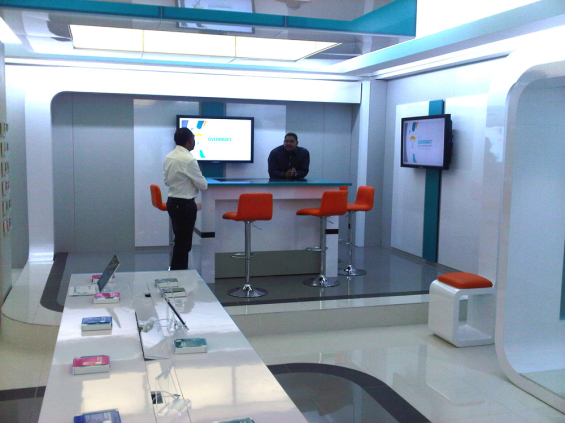 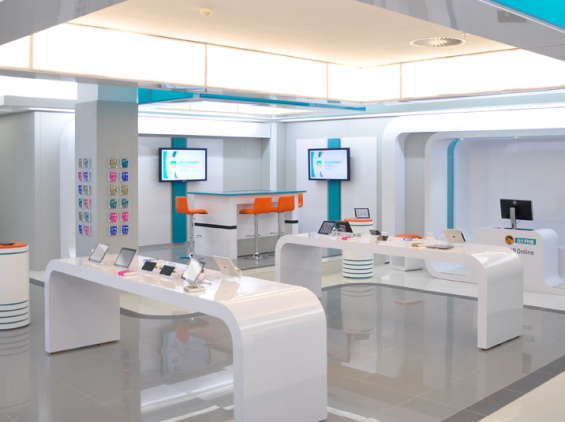 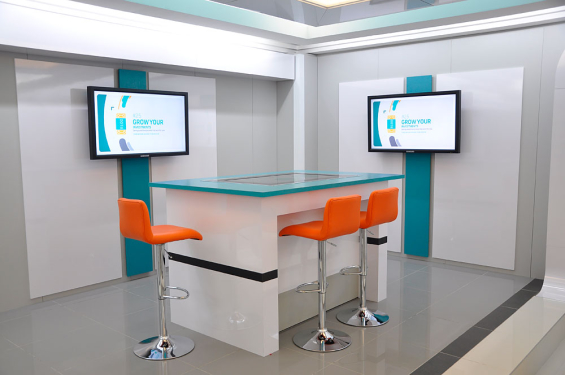 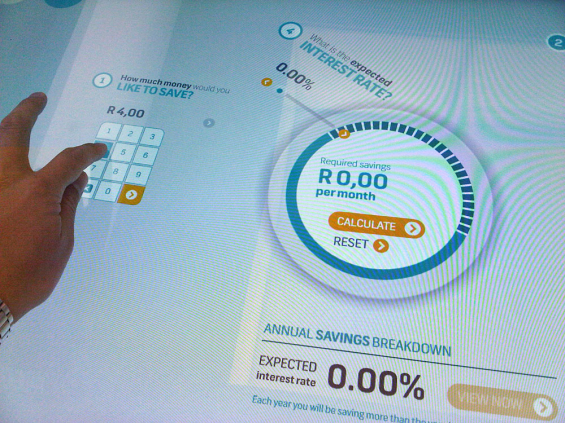 Reality Check: Just because a branch is stuffed with tech doesn’t mean they are affecting any kind of “shift” away from traditional- to digital channels. dotFNB still encourages customers to visit brick-and-mortar locations. If it’s easier or cooler to use the in-branch shopping tools, customers may actually use the bank’s traditional channels more, not less.

Absa stepped into the future with its so-called “Branch of Tomorrow, Today” in Johannesburg. Absa will use this branch as a test lab for products and processes before rolling ideas out across its entire branch network. Absa says its “Test Lab Branch” concept is focused on “prototyping technology, streamlined processes and strategically placed interactive digital media.”

Among the range of technologies Absa is testing: life-size interactive touch-screens, a digital 24-hour self-service zone, table touch-screens and telepresence. Absa is even branding aspects of its service experience, such as “Quick Service Enquiries.”

The digital wall in the “customer interaction zone” contains 33- and 55-inch Samsung professional display monitors, with 24 display screens making up each “forest display”. A Coolux media system centrally manages all digital devices in the branch, and Samsung Microsoft touch surfaces are embedded in the desktops. 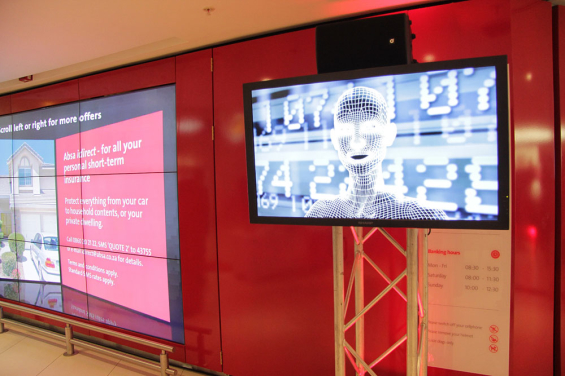 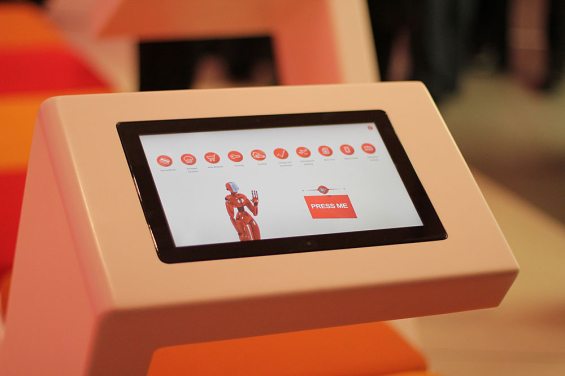 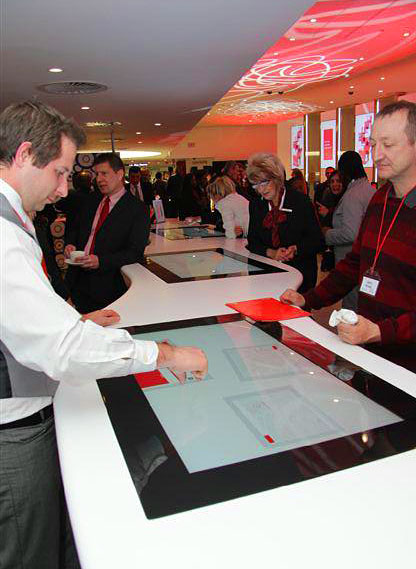 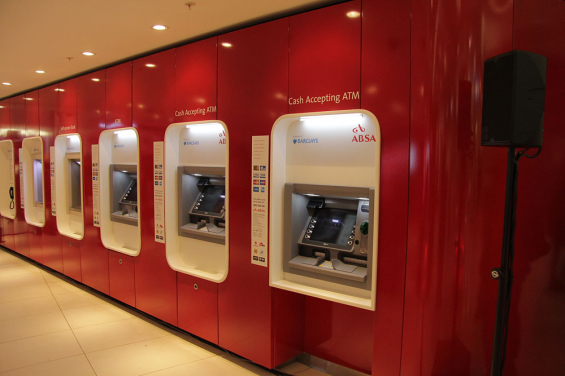 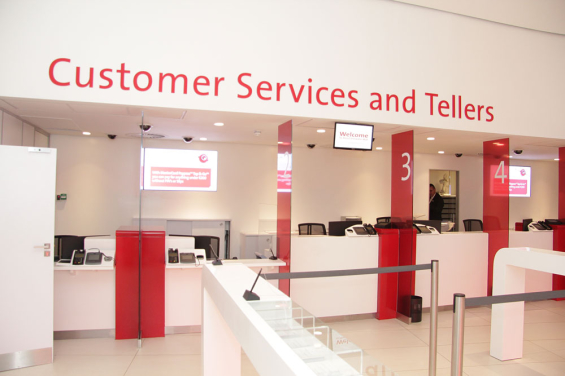 Absa says its branch concept is not about “dazzling” customers with innovations, but more about launching services that are “relevant to the bank’s retail customers.” The bank maintains some 990 outlets and 9,540 ATMs serving 12 million customers — more than any other South African bank.

Standard Bank wanted a new branch design to serve a new generation of banking customers. They set out to create a sleek, slick, urban and open space, with modern design and contemporary stylings — a sophisticated yet relaxed environment. In other words, they wanted something hip and cool.

There are iPads, iPhones and iMacs sprinkled generously throughout the two-minute video Standard Bank produced to show off its new “youth focused” branch concept. “Customers can have some fun with free access to social networking sites such as Facebook, Twitter and YouTube.”

Reality Check: If banks hope that technology will save branches, they are sorely mistaken. No one wants to hop in their car and drive to a bank branch to surf the internet. If they can bank from home (or cruise social media sites), they will. Performing activities in a branch that one can do elsewhere is not an advantage, nor does it add value to customers — no matter how much whizbang tech or fancy design wraps the experience.

The new branch boasts an “Intelligent Depositor” ATM, providing for real-time deposits even after traditional banking hours. There’s also free WiFi, and a digital queuing system. The new branch brings Nedbank’s existing network to 467 branch across South Africa. Sorry, this branch just opened June 21, so no photos of this branch are available yet. If you see any, please send them in.