Video banking has been around for a few years now in the U.S., but FirstOntario Credit Union says it is the first in Canada to offer it.

Much like an ATM, PAT spits out cash and takes deposits. But PAT, short for Personal Assisted Teller, has a number of features you won’t find on your typical cash machine. It can handle coins. It has a digital signature pad. And, most notably, PAT has a live video interface so users can interact with a real teller while they do their banking.

“PAT offers live video-banking, with the service of a teller and the convenience of a banking machine,” says FirstOntario. “PAT is as secure as using a banking machine or going directly into the branch.”

PAT uses uGenius remote teller technology to connect users with on-screen service representatives using live streaming video. FirstOntario says most of the daily banking you would normally do face-to-face can be done at PAT, including deposits, withdrawals, check cashing, bill payments and Canadian drafts. Only FirstOntario members can trigger the live video chats with tellers.

To stimulate the public’s interest in PAT, FirstOntario is holding a “Bonus Cash Giveaway,” where withdrawn bills will randomly be replaced with larger denominations. There are six weekly prizes with bonus cash totaling $250. Each week PAT will randomly dispense:

FirstOntario says it introduced video tellers as a way to stretch service hours at its branches. “The beauty of PAT is that we can extend hours,” Dave Schurman, EVP/COO at FirstOntario, told CHCH news in an interview. “We could virtually go 24/7, 365.” Indeed, that’s what Mid-Hudson Valley Federal Credit Union did late in 2009 with its video tellers.

About the strategy, FirstOntario said, “PAT is sure to appeal to our younger members while still keeping the human touch that older generations love.”

PAT is currently installed in only one location, but there are immediate plans to roll units out at three other branches.

FirstOntario hints that it may build PAT units in other areas where it doesn’t have branches. “We are also looking at strategic partnerships to launch PAT in remote locations,” FirstOntario said. Translation: FirstOntario is looking to sublease space (within a mall or store for instance) vs. building freestanding PATs. Stay tuned…

Analysis
There’s a fierce debate raging within the financial industry about what role — if any — branches have in 2010 and beyond. While some argue that branches are doomed to obsolescence, others see a future for branches as service centers, with smaller footprints focused on high-value products and resolution of customer issues. Oddly, neither side ever discusses how video tellers fit into the equation.

Why not deploy video tellers as stand-alone kiosks in areas where it’s impractical to locate branches? Walk-up or drive-through. For financial institutions looking to expand their footprint without a huge investment in bricks and mortar, video tellers seem like the obvious solution. Perhaps the future will see more video tellers handling routine transactions, while regional service centers focus on high-value financial services across wider geographic areas. 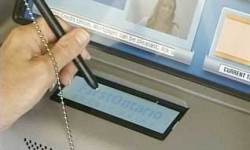 With the press of the “chat” button, PAT connects users with a teller via video.
The unit includes solutions enabling tellers to verify someone’s ID and signature. 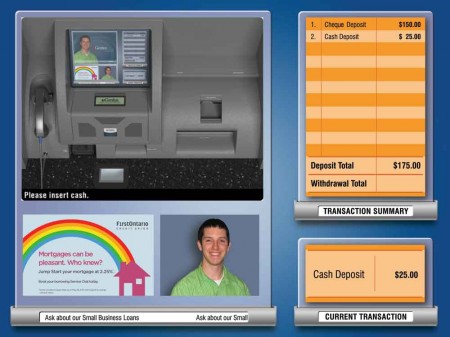