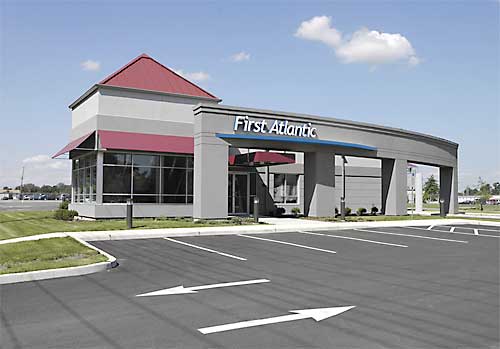 John Culp, CEO of First Atlantic Credit Union, complained that his financial institution suffered from “a physical image that was like that of a classic bank branch, with teller lines and big walls separating us from the customers.”

Enter Kenneth Gruskin, president of Gruskin Group, an architectural firm, who has reworked five of First Atlantic’s branches, including its headquarters.

The new branch design replaces traditional teller with “pods” (previous coverage on teller pods from The Financial Brand here and here) where members stand side-by-side with tellers, not opposite them. This style of transactional delivery was arguably made popular by the now-failed thrift, WaMu.

The branch also deploys video tellers (shown in the first photo below). Video tellers, also known as virtual tellers or Remote Teller Stations (RTS), have been around since at least 1996 but adoption has been slow. They work basically the same as drive-through banking, only it’s more like walk-up banking. The terminals provide a video and intercom link to live tellers elsewhere in the building. Money changes hands through pneumatic tubes. The member or customer can show their driver’s license to the teller via the two-way video.

In an interview with New Jersey Biz, Culp said it’s working well. While he can’t measure the design’s success, “people feel more comfortable, and customers say they like it.”

The architectural firm has helped First Atlantic “put together a look and feel for our brand that coincided with the image we wanted — an open, inviting environment,” Culp said.

First Atlantic Credit Union has seven branches in New Jersey and Pennsylvania, and has $270 million in assets. 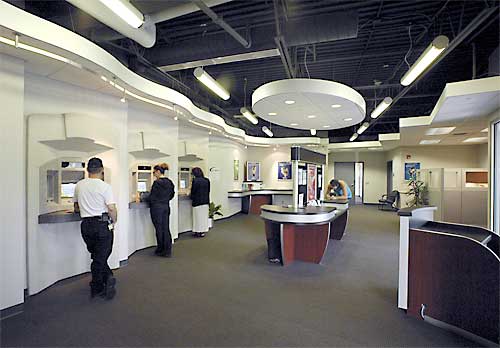 Video tellers (shown left). People pick up the phone and talk with a teller working unseen somewhere else in branch. One employee can manage two or more video teller stations. Notice the unfinished ceiling that helps project a contemporary industrial image while creating a more open feeling in the branch. 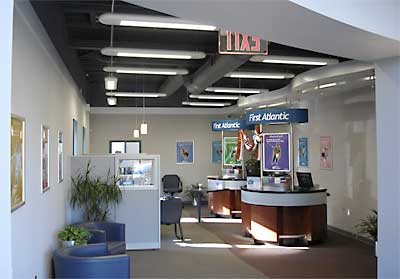 Architects integrated retail merchandising into the design plans for First Atlantic’s branches from the outset — critical if you want your retail graphics to fit cohesively in your branch vs. looking like they were a tacked-on afterthought. The space also makes use of natural daylight. 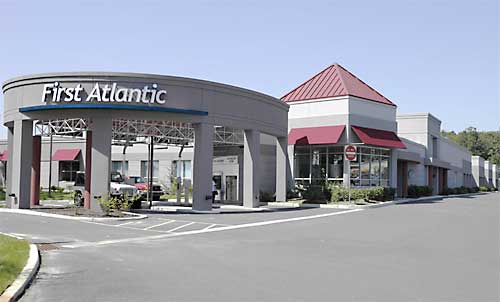 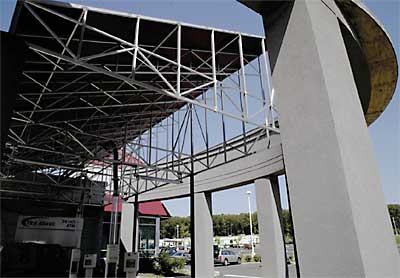 A detailed view of the intricate and interesting architecture used in the drive-thru’s canopy. 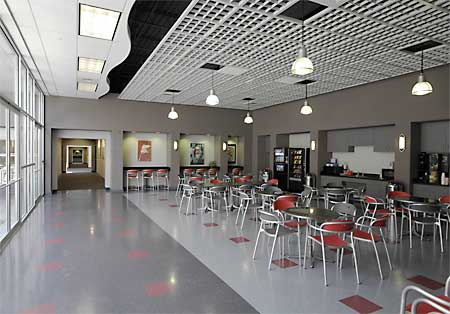 The staff cafeteria received the same level of architectural consideration as the rest of the facility. Notice the opportunities to put marketing messages (presumably aimed at staff) on the far wall.