In the next few years, consumers say they plan to use branches as much if not more than they do today. But data suggests the tide is shifting to digital channels.

Branches remain the preeminent delivery channel for banks and credit unions… for the time being, that is. According to research from Accenture, consumers still prefer branches to websites, but the margin is narrowing — 41% to 35%.

In Accenture’s survey of 2,000 U.S. consumers, nearly four out of five consumers (78%) said they see themselves still using branches as often — if not more often — in five years’ time, in large part because 66% of them still prefer to talk to a person vs. purchasing a banking product online.

27% of survey respondents said “more branches close to where they live or work” was a key reason to switch providers. About half (48%) said they would be inconvenienced by the closure of nearby branches to such an extent that it would induce them to switch. 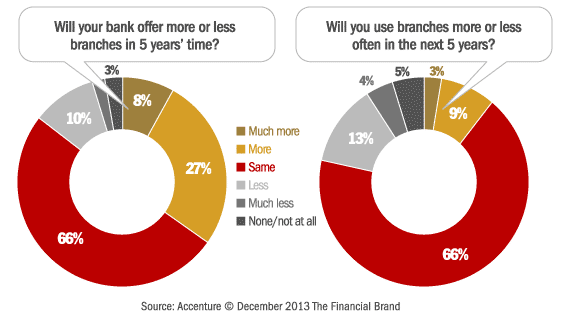 “There is little question that branches remain important in the minds of consumers today,” said Mike Goodson, a managing director and head of management consulting for Accenture’s North America banking practice. “They are cited as the number one reason for loyalty.”

60% of all banking products are still sold in branches. But that also means 40% of products are being purchased elsewhere — primarily online.

Key Facts: The top 25 US banks spend more than $50 billion per year maintaining more than 43,000 branches nationwide. And opening a new branch costs more than $2 million on average. 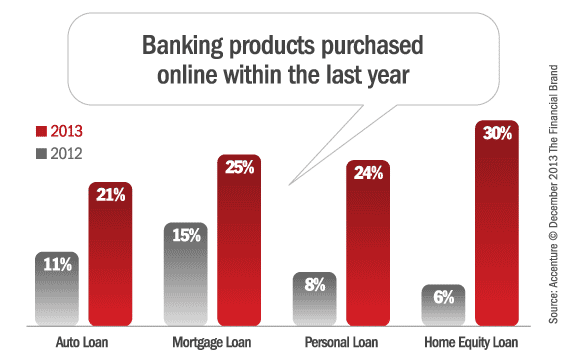 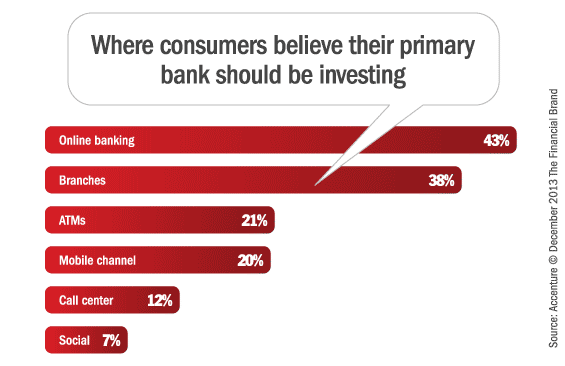 “Digital technology and rapid changes in customer preferences are threatening full-service banks that do business primarily through branches,” said Wayne Busch, managing director of Accenture’s North America banking practice. “Given the scale of these disruptions, traditional full-service banks, as a group, could lose significant market share by 2020 to banks that reorient around digital technologies. Research shows signs of this already occurring.”

Accenture says online-only players could steal as much as 35% of traditional banks’ market share, costing them an estimated 15% of their revenues.

Profitability pressures will force banks to promote less costly and more convenient ways of banking to customers, and the rapid rise of mobile banking illustrates how quickly customer behaviors can change through digital technologies.

The cross-selling challenge persists for full-service providers. US banks have plenty of information about their customers, but our research shows, that many don’t necessarily know how to make sense of it. As a result, customers are shopping around.

While US consumers tend to stay with their primary banks (only 9% had switched within a year), they are heavily inclined to shop around for new products. One-third (34%) of traditional retail banking products sold last year were from institutions other than customers’ primary banks, according to the survey.

More than half (53%) of our survey respondents have chosen a provider other than their primary bank for credit cards, 60% go elsewhere for home mortgages, 68% use other providers for auto loans, and 82% do so for brokerage accounts. 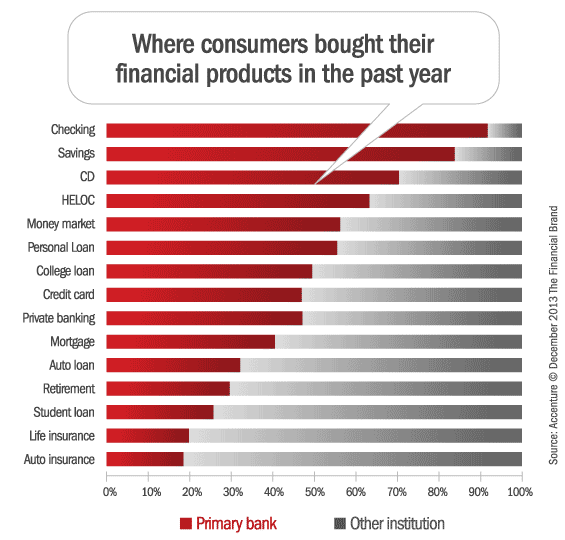 “Branches remain vital to banks, but they need to be reimagined,” recommends Goodson.

Lite branches. Less than one-third of the network comprised of ‘light’ branches that are oriented to sales. These are highly automated with a small staff and real estate footprint focused on sales and providing access to remote advisory specialists.

Kiosks. A higher ratio of kiosks – up to half the network – geared to routine account services situated in malls and transport hubs. These are cashless and feature advanced ATMs – with video – allowing customers to connect and transact with remote staff.

Full-service ‘hubs.’ Like conventional branches but fewer in number, these offer full sales and service support with extended hours, including specialized advisers for things like mortgages and trading.

Flagships. A small number of strategically located flagships to act as centers of sales and service-excellence that promote the bank’s brand and introduce new offerings and self-service tools.

For the study, Accenture conducted online interviews with 2,000 retail banking customers of the 15 leading U.S. retail banks, including the two largest virtual banks (Capital One 360 and Ally). The survey was conducted in May 2013. You can download the entire report for free here (instant PDF download).