The case against future branch growth is well documented. But are branches dead? Data from a comprehensive credit union industry study suggests the complete opposite: those who have added branches in the last five years significantly outperformed those who didn’t, and along every metric that matters.

If pundits and banking industry prognosticators are right, branches have been sitting on death row for a long time — “Just a matter of time,” they keep telling us. But decades have passed and the debate over the fate of branches still rages. Now with mobile banking renewing doubts in the brick-and-mortar channel, branch proponents have felt like there was little they could do but pray for the proverbial pardon.

Exoneration for banking’s venerated channel may have just arrived, and in the form of a study from Momentum, a branch design/build firm. The study, developed in partnership with The Financial Brand, compares performance metrics for credit unions that added branches against those that didn’t across a five-year period (2007-2012).

Have credit unions that have increased their number of branches over the last five years performed better than those that did not increase their network size? Do they add more members? More assets? Does branch network growth improve loan origination growth? The answer to all these questions appears to be “yes.”

By every measure — asset growth, member growth, loan growth and ROA — credit unions that added branches vastly outperformed those that didn’t. And while the study doesn’t paint a clear cause-effect relationship between branch growth and bottom-line performance, the data is extremely compelling. 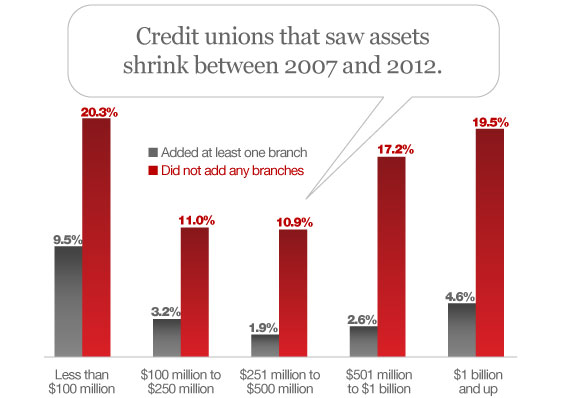 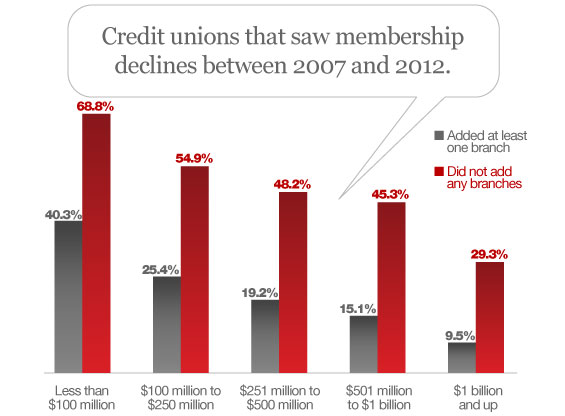 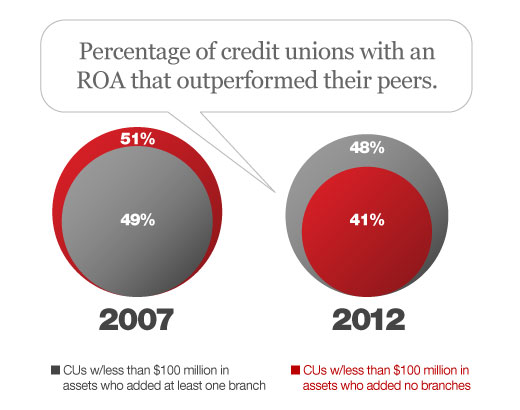 Using NCUA 5300 call reports, every credit union in the U.S. was assessed through the lens of branch growth, with those who added at least one branch during the last five years falling into one group, and those with flat- or negative branch growth falling into another. The following data points were then collected and analyzed for each of the two groups:

The study breaks down results along five separate asset tiers (the number of credit unions included in each asset tier is indicated in parentheses):

With a total of 7,097 credit unions, this study is likely the first, and most exhaustive of its kind ever undertaken in the credit union industry. 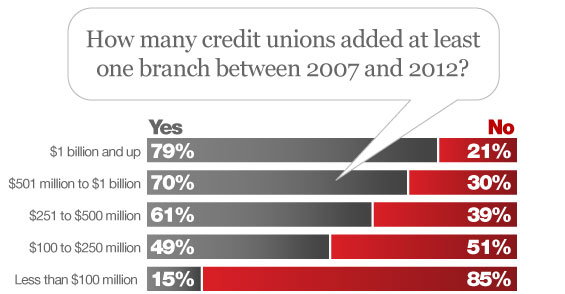 The study acknowledges that many factors beyond a credit union’s number of retail branches have a significant influence on its financial performance including local and state economies, competitive intensity, mergers, field of membership, or marketing budget. Nevertheless, the data suggests branches deserve at least a “stay of execution,” if not a full pardon.

Bottom Line: The analysis indicates a strong correlation between increases in retail branch network size and growth along key select measures (total assets, membership, and loan originations). Regardless of asset size, credit unions that had a net increase in the number of branches between 2007 and 2012, experienced greater increases in total assets, members, and loans originated per FTE.