After a 40-year boom in branch building, the U.S. will witness a dramatic reduction in the number of operating branches.

US banks and credit unions have been fond of growing business through branch-building. But in the report “Branch Boom Gone Bust,” Bob Meara and Stephen Greer, a pair of analysts at Celent, predict a steep decline in U.S. branch density. The authors argue that the retail banking industry has yet to respond to “the obvious migration of customers to new digital alternatives.”

Since 1970, the US has seen 281% growth in the number of FDIC-insured bank branches — a sustained compound annual growth rate of 3%. 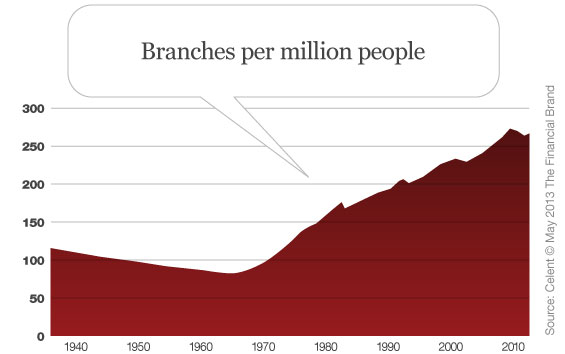 The report asserts that big banks are primarily responsible for the overinvestment.

Bob Meara, Senior Analyst with Celent’s Banking Group, says there is every reason to believe branch densities will be substantially lower.

Consumers will continue to migrate to online and mobile channels, and this trend will not be limited to Gen-Y, according to the report.

“As a result, consumers will accept a longer trek to the local branch,” Meara continues. “Remaining branch activity will increasingly involve sales and service interactions that consumers either prefer to conduct in-person or believe cannot be done via alternative channels.”

Slash the Branch Network, Then Completely Rethink and Reinvent Those That Remain

Retail financial institutions need to do more than simply reduce the number of operating branches. “What is needed is a fundamental redesign of retail operating models,” Meara advises. “Rather than resisting the trend, banks should welcome it and reinvest their savings [from branch closings].”

Celent says the branch channel must change in both form and function. “What’s missing is a similar consensus that fewer, smaller, more highly automated branches will be needed,” Meara explains.

“If banks don’t align their multichannel strategies with this seismic shift in consumer preference, they’ll be at a significant competitive disadvantage,” adds Stephen Greer, Analyst with Celent’s Banking Group and co-author of the report.

But this is easier said than done, according to. “Financial institutions have their work cut out for them,” Greer points out. “Transforming the branch network is neither cheap nor easy.” 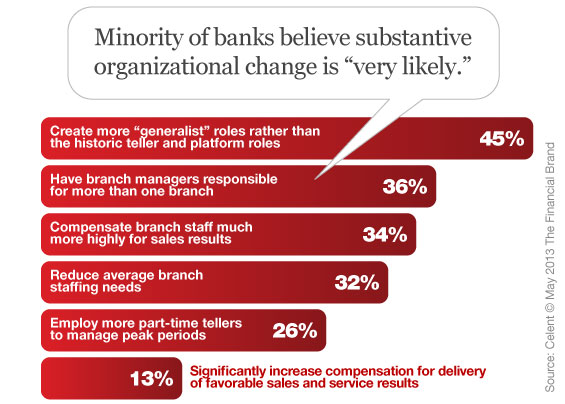 So How Badly is the U.S. Overbranched?

While many pundits and industry observers agree that bank branches must morph from “transaction factories” to “sales and service centers,” few think a massive erosion in the number of bank branches is likely. 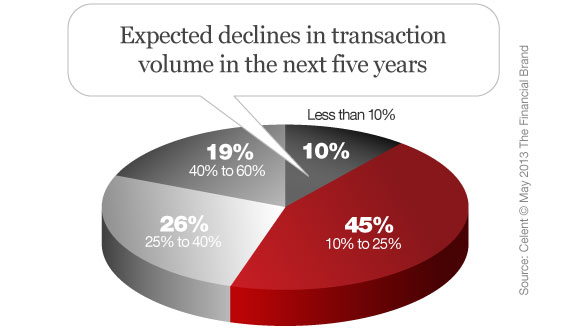 The report’s conclusion is inescapable: the branch channel will undergo a “right-sizing” to reflect changes in consumer preferences. Celent asserts the US will witness a 30% to 40% reduction in the number of bank and credit union branches over the next 10 years. And this down-sizing will be as steady as it is unavoidable, with big banks leading the way. Indeed multiple large institutions have already launched major cost-cutting initiatives, and many are experimenting with alternative (and much smaller) branch designs.

Eventually financial institutions will be armed with multichannel sales/CRM capabilities, and they will be able to ease up on their historic dependence on the branch channel for selling.

Successful institutions will leverage their competitive cost advantage and outperform those that are slow (or unwilling) to shed the branch channel’s overhead burden.