Subscribe Now Get The Financial Brand's FREE Email Newsletter
Branches aren’t dead, according to Celent, they’re just different. The consulting firm explores the future of multichannel retail banking in a series of three reports, arguing that branches will continue to be both relevant and strategically important for the foreseeable future... but they need to evolve. Quickly.

Celent, a Boston-based financial research and consulting firm, contends that branches represent the undisputed premier channel for client acquisition and will remain at the heart of retail banks’ distribution strategy. Despite the growing popularity of alternative distribution channels, Celent contends that branches will continue to be both relevant and strategically important for the foreseeable future.

Why? Primarily because they play a central role in converting leads and contacts into tangible sales, and (at least for the time being) they are the preferred channel among many consumers for advice involving significant financial decisions.

That said, Celent warns financial institutions that the current branch-based business model is unsustainable, and believes most banks underestimate the changes that will have to be made to remain viable over the next five years.

Celent cautions that the importance of branches will wane facing growth in other channels.

“The call for branch transformation is both urgent and important,” Celent asserts in its analysis. “But it must not be done in a vacuum. Delivery channels and their underlying infrastructure are all interdependent.” 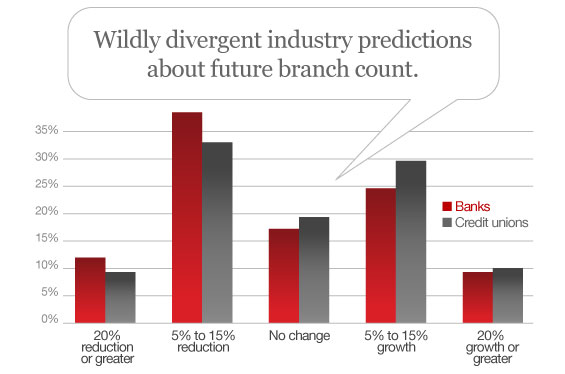 When it comes to the number of branches around 5 years down the road, banks and credit unions don’t see eye to eye. Over 35% of banks say there will be a 5% to 10% reduction in overall branches, around 30% of credit unions think there will be an increase in that range. 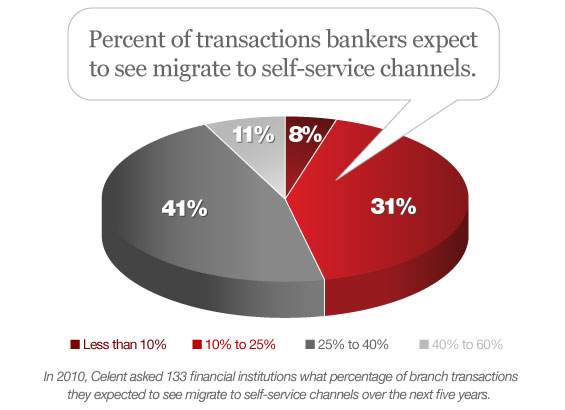 Celent believes a more pressing need facing many financial institutions is for a comprehensive core system and delivery channel overhaul. Those that have bit the “core conversion” bullet are now enjoying a significant advantage in cost, agility, and effectiveness.

No Blueprint for the Branch of the Future

Celent says there is presently no blueprint for the branch of the future, although some trends have emerged. Celent has observed a number of common themes among branch redesign efforts.

“Physical branch design is the least impactful in producing highly effective and efficient channel delivery. Exotic designs are obvious, but their justification is not.”
— Celent

Concierge – The idea of a concierge is not new, but one that has grown recently in retail banking. Celent finds the concierge role an appropriate consideration for large branch formats needing an obvious point of customer connection. For efficiency, concierges need to have secondary duties to perform during low traffic periods such as outbound telephone sales or social media customer service tasks. Otherwise, the business case for funding an incremental concierge might disappoint.

Concierges aren’t suitable for all financial institutions. Extraco Banks, for example, tried concierges and moved away from them, asserting an unfavorable choke point in branch traffic flow. Instead, each Extraco Relationship Banker is a concierge, teller, platform salesperson and lending officer all in one. A concierge role would be highly redundant.

Teller Pods – Teller pods are stand-alone physical structures that house one or two teller stations as an alternative to the traditional teller counter set up, and are a foundational element “open branch” designs. Teller pods are designed to put tellers (and/or other branch staff performing transaction support) in easily accessible and inviting locations. Many financial institutions employing teller pods place them out in the open near the front of the branch with branch staff on their feet available to greet each incoming customer. Once they are greeted and their needs are assessed, customers are readily escorted to an available teller pod or a platform sales desk as appropriate. Note: teller pods require cash recyclers.

Lounge – Traditional branches were designed around transactions. If there was a waiting area, it was the teller line. That was deemed historically acceptable since two-thirds of branch transactions or more were teller transactions. As branch transactional activity diminishes, entering customers will need a decent place to sit while they wait for assis- tance. Transforming a seating area into a lounge serves several purposes. Tastefully decorated and outfitted with a self-service refreshment bar creates a more welcoming and comfortable waiting area and adds little cost. The addition of relevant financial reading materials alongside product literature provides suggestive selling opportunities and helps make the wait appear to go by faster.

Video Conferencing – Customer video conferencing has several use cases in highly evolved branch designs. Its most common use thus far has been as part of a self-service kiosk for connection to customer service personnel within the branch environment. Another evolution is within a personal teller machine used to replace traditional teller transactions either in the branch or in a drive-through lane. A third variation occurs at the plat- form desk or other office as a means to connect SMEs with customers cost effectively. In all three cases, Celent sees a business case that improves with the size of the financial institution.

Kids Area – A safe place for the kids to play so the adults can concentrate. Typically, Celent observes kids’ areas to be rather small, away from high-traffic areas, and positioned far apart from branch entrances. For financial institutions serving the young family demographic, a kid-friendly branch environment can reduce stress for staff and customer alike, particularly when interactions last than a few minutes. Like lounges, kids areas are low cost branch additions.

Past the Tipping Point

Events of the past several years have pushed a number of financial institutions past the tipping point, leading to significant, measurable changes in attitudes towards branches since Celent’s last survey in June 2010, when half of all financial institutions surveyed said their branch network was their #1 channel priority (68% ranked it either #1 or #2).

“Our channel investment is simply in proportion to the way our consumers do business with us.”
— US Super Community Bank

Blueprint or not, Celent says banks and credit unions must plow ahead.

Even though the majority of financial institutions surveyed (52%) indicate that improving branch sales and service performance was their “top branch channel priority,” few have invested in technologies to help realize that goal, according to Celent.

Financial institutions concede branch traffic is migrating to self-service channels, Celent says the reductions in the number of physical branches and staffed teller stations are disproportionally smaller than expected. 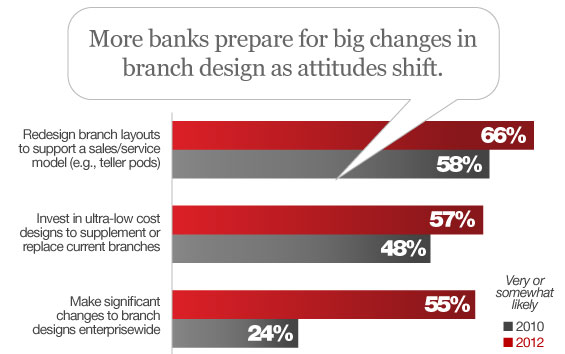 In the long term, Celent predicts branch networks that are smaller, have fewer staff, and are much more highly automated. Branch expansion, Celent says, will be highly targeted when it does occur. But Celent is concerned banks are ignoring the brick-and-mortar imperative, saying the evolution to a significantly different physical, organizational and technological retail environment — the “branch of the future” — remains more of a distant dream than a near-term reality.

Celent says most financial institutions will choose to treat branch channel evolution as a journey rather than a destination. Few will transform their branch network in one fell swoop, opting instead for a series of incremental, manageable initiatives, using trial-and-error along the way.

Celent has three research reports in its series on “Branch Banking in a Multichannel World.” For the study, Celent conducted phone interviews and a web-based survey. The survey garnered 187 usable responses and 142 fully completed surveys. Respondents were somewhat evenly represented among asset tiers

Part I: What Ever Happened to the Branch of the Future? This report sets the stage by outlining the increasingly challenging retail banking business environment in North America and analyzes reported multichannel and specific branch channel priorities. The report then provides an analysis of the current state branch channel technology and physical environments. We then take a predictive look at the midterm branch technology environment based on surveyed technology direction and adoption intent. Lastly, the report looks out five years to forecast the likely evolution of North American branch banking.

Part II: The Many Faces of Change. The report begins with a brief discussion of the “new normal” in retail banking: the factors driving the acceleration of branch channel trans- formation and their likely persistence. The report then examines the wide diversity of outcomes among financial institutions with highly evolved branch networks. From there, the report distills a taxonomy of future branch initiatives, separating physical design, technology, and cultural and organizational aspects. Finally, the report examines the relatively well-worn path taken by otherwise diverse institutions in their quest to take the branch channel to new levels of efficiency and effectiveness.