Is the branch going to survive?

At least not according to financial futurist Brett King.

King, best-selling author of Bank 2.0 and founder of Movenbank, believes financial institutions making any further investment into the brick-and-mortar channel are wasting their time, energy, resources and money.

In King’s latest eBook, Branch Today, Gone Tomorrow, he asserts his unwavering belief that the complete and utter death of all bank branches is coming soon… if it hasn’t started to happen already.

“There is still considerable effort expended today in retail banking, arguing for saving as much of the branch function as possible,” King writes. “The more we keep arguing about the branch being at the core of the ‘bank’ or at the core of the relationship, the less effort we put into truly transforming the way we work with customers.”

In recent years, King has developed quite a reputation in the banking world for his ultra-bullish outlook on digital channels. He is frequently revered as a disruptive force within the financial services industry, asserting a bold, sometimes controversial perspective while he beseeches, dares and occasionally scolds banks to pursue more innovative strategies.

“The destruction of the physicality of banking from branches, checks, cards and cash will all be attributed to the emergence of the iPhone.”
— Brett King, Author

King’s central argument is largely framed around themes of obsolescence. King says the banking industry faces a fate similar to what happened in telecommunications, where dinosaurs that once dominated get replaced by new players touting new technologies. To illustrate this point, he draws an analogy with mobile communications providers who pushed aside traditional phone companies who themselves had rendered telegraph operators obsolete.

“Traditional players are not afforded any protection by means of their existing infrastructure or distribution model when a new and improved core technology emerges,” King says.

King offers the meteoric rise of internet banking as testimony. He sees the explosive growth of online banks like ING Direct and Ally as an omen signaling the impending channel shift for which bankers seem so unprepared.

Inasmuch, King’s most recent book could be interpreted as a prophetic warning to the worldwide banking industry, with the main message being “evolve or die.”

As evidence of the all-digital future urgently requiring banks’ attention, King reminds us of the tectonic technology shifts that have reshaped society. Bookstores, video stores, music stores — all but extinct thanks to the internet. And who buys encyclopedias anymore? No one. Everything, King reasons, is headed online and going mobile. That includes banking. 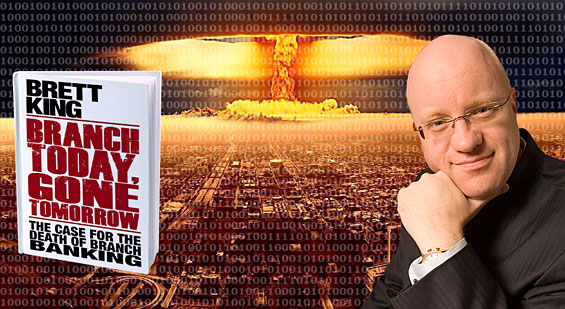 “My kids may never actually need to physically enter a branch by the time they are in college or in the workforce.”
— Brett King, Author

“Mobile banking is being adopted 300% to 500% faster than internet banking was adopted,” King points out.

If King’s vision of the future ultimately materializes — a world dominated by mobile financial apps — he believes credit will rest solely on the shoulders of Apple’s Steve Jobs.

“The destruction of the physicality of banking from branches, checks, cards and cash will all be attributed to the emergence of the iPhone,” he confidently asserts.

But when will all this happen? King says soon.

“My kids may never actually need to physically enter a branch by the time they are in college or in the workforce.”

True, King’s kids may never have to use a branch? But what if they choose to? Maybe there will always be some segment of the population who feels more comfortable discussing significant financial matters in person?

Only time will tell if King is right. Fortunately, the wait shouldn’t be long.