Banking consumers are still psychologically attached to branches even though they increasingly prefer non-branch channels for their day-to-day banking transactions.

“Research shows that levels of branch attachment remain very high, even in segments of customers that don’t use branches any more.”

According to a study from consulting firm Novantas, the number of consumers who use remote channels — call centers, online and mobile — as the primary means of banking has spiked, with more and more customers viewing branches as an alternative for limited, high value interactions only.

As many as 35% of U.S. banking customers now conduct their business virtually, and branch traffic volumes continue to fall — as much as 20% annually for some types of transactions.

The second annual Novantas U.S. Multi-Channel Customer Survey found that customer preferences, attitudes, and behaviors continue to move away from branches and into remote channels. The shift, Novantas says, is visible for nearly all categories of activity — from deposits to service issues — as enhanced technologies and capabilities accelerate the migration of transactions into remote channels.

Age of respondents played a factor in the Novantas study. Only 37% of those age 55+ said they preferred remote channels for the majority of their banking transactions, compared to 59% of those ages 30-54 and 64% of those ages 18-29. 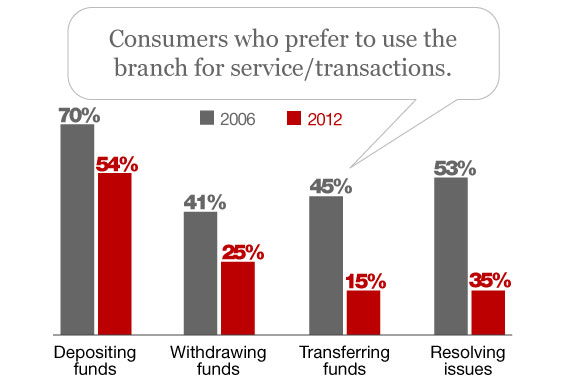 Despite visiting branches less often, customers still care about branches. Even as customers shift away from the branch for their core transactions, there are still many situations where the branch is the preferred option. For example, 30% of customers said they needed a branch when the ATM did not provide enough cash (due to daily limits on most ATMs).

In addition, “having a branch near where I live” is still the top criteria for consumers choosing a new bank or credit union, with 87% of respondents stressing the importance of proximity. In fact, 47% of customers believe that a bank is not even legitimate unless it has branches, up from 41% only a year ago.

The study reinforces the idea that branches aren’t dying (as widely rumored by many observers in the financial industry), merely evolving from sprawling transaction factories to high-value service centers that are smaller in both size and number.

Branch networks are perilously overgrown relative to future revenue opportunity they represent, Novantas says. Already, the industry may have excess capacity to the tune of 16,000 unprofitable branches out of a total of 93,000 (17.2%).

”The business case for providing extensive teller-based transaction services in the branch is weakening by the day.”

For traditional banks built around large branch networks, the findings in the Novantas study are a double-edged sword. Virtual consumers are much cheaper to serve, but the shift away from the branches reduces opportunities to cross-sell new products.

“There will be no return to the climate of five years ago, when all-purpose branches were proliferating nationwide,” warned Darryl Demos, one of the authors of the Novantas report.

“The value of the sales force investment many banks have made has always been positive,” Demos said. “Banks could count on a ‘if you build it, they will come’ model working in most markets. Today, that’s over.”

While the future may be bright for branches that are properly located, configured and staffed for high-value multi-line service, the fate of other branches, however, has slipped from tenuous to untenable, Novantas says in its report.

“The branch network is dividing into clusters that can profitably serve high-value customer needs, and those in need of dramatic cost reduction.”