Average cost per transaction doubles, even though branch volumes have been cut nearly in half. This is why critics say branches are dying — the math doesn’t pencil out like it once did.

Branches today process roughly half the number of transactions they did just 20 years ago. According to an industry study on branch transactions, volumes have declined 45.3% since 1992, while the average cost per transaction has more than doubled from 48¢ to $1.08.

The findings are based on a compilation of transaction and labor cost statistics assembled from proprietary data collected over two decades.

FMSI, the company that authored the study, is uniquely qualified to offer their insight on branches. They provide branch lobby tracking and management solutions to financial institutions across the U.S., allowing them to count branch visitors and transactions for every branch in their client network — and they do this every 15 minutes, all day long. In total, FMSI says they look at more than 17 million monthly transactions.

“We are the only ones in the industry that have access to this type of aggregate information,” W. Michael Scott, President/CEO of FMSI, points out proudly.

With their front row perspective on branch utilization trends, they’ve witnessed a 17.9% decline in branch productivity since 1992. Transactions-per-teller-hour have dropped from roughly 20 in 2003 to barely 15 in 2013. Salary and benefits paid to tellers ballooned 84.2% over the last 20 years, translating to a 123.6% increase in labor cost per transaction. 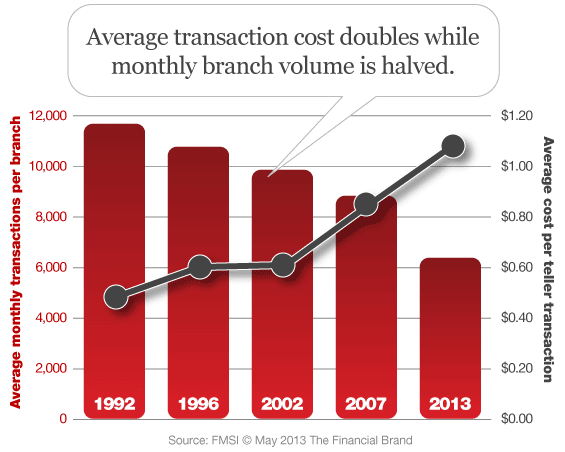 The hourly rate for tellers in 1992 was $8.85. Back then it only cost 48¢ for a teller to perform the average transaction. Skip ahead to 2013, it costs an average of $16.30 per hour to cover a teller’s salary and benefits, and average transaction cost has shot up over $1.

Does this mean it’s time to write the eulogy for branches? Probably not. While their role as “transaction factories” will undoubtedly remain on a steep and steady decline, they will likely continue to be important nodes for advisory services, high-value products and other face-to-face interactions. 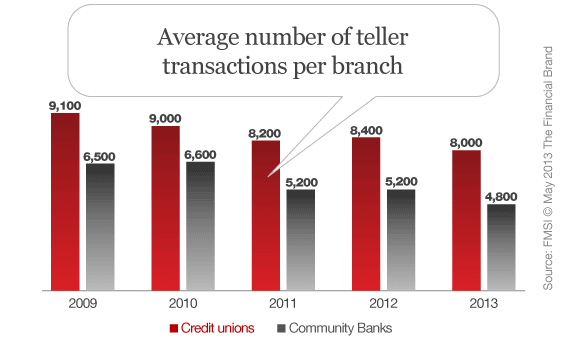 “Management was convinced there wasn’t a lot of money to be saved in closely managing teller staffing,” Scott explains. “They were looking where to add new branches as new housing developments popped up on every corner.”
In a sense, the housing bubble that Scott alludes to helped fuel another bubble in branch building — more homes meant more branches with more tellers.

FMSI says many financial institutions have chosen to ignore trends suggesting the market is now over-branched. According to FMSI, the landscape has changed markedly from banking’s glory days, and it could very well be time to start closing low volume branches.

“Sometimes it can appear that banks are working for their tellers, not the other way around.”
— JR Pimentel, VP/HR
Bristol County Savings Bank

The company stresses the importance of “branch workforce optimization,” consultant speak for “getting the most out of the fewest people possible.”

FMSI says the key is to identify predictable lulls in branch activity.

“By paying closer attention to teller idle time, or the time tellers are waiting for transactions, an institution can get more accomplished,” Scott explains.

What might tellers shift their attention to when not handling transactions? FMSI says proactive outbound selling campaigns are one idea.

According to research from Celent, only about 3% of banks address the issue of teller management — a statistic Scott finds “alarming” given the bottom line pressures financial institutions face today.

“Reducing operating expenses through consolidating your low volume branches, coupled with a systematic workforce optimization program, can better position your institution to face the increasing challenges the 21st century has to offer,” Scott concludes.

You can download the complete 19-page “FMSI Teller Line Study” here as a PDF for free (requires completion of a short form).