Subscribe Now Get The Financial Brand's FREE Email Newsletter
Measuring less than 900 square feet, BMO's studio location in Montreal is among the smallest the bank has ever built. And it only cost $450,000 to build.

The banking industry’s debate over the fate of branches rages ad naseum. Branches are either doomed to an abrupt and sudden death, or they will thrive for decades to come, or somewhere in between, depending on which side you believe. But there seems to be one point on which everyone agrees: However many branches will remain, they will be getting much, much smaller.

BMO in Canada is the latest to test what The Financial Brand dubs the “nanobranch strategy.” BMO’s so-called “studio branch” is a compact 900± square feet, sitting on the ground floor of the ZUNI condo complex in Montreal.

The smaller studio branch will employ four cross-functional bankers, each able to accommodate sales, service and transactional demands. The location will always be staffed by at least two employees. One will handle transactions at the branch’s sole teller pod — a casual, conversational “tower” with a cash recycler backbone. The other employee(s) — “Financial Services Managers” — will address customers’ sales and service needs at sit-down locations, located deeper within the branch past the teller pod. 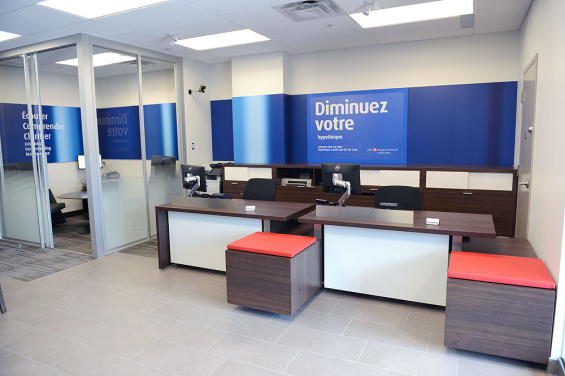 Many other banks are exploring the nanobranch strategy. Just two weeks before BMO opened its studio location, Wells Fargo opened its own design with a miniature footprint. Although slightly larger at 1,000 square feet, the Wells Fargo microbranch shares the same basic objective as BMO’s studio: How small can we save the most money by making new branch locations as small as possible?

Paul Dilda, the head of BMO’s North American Branch Channel, is keen to point out that his bank too a much different approach to the nanobranch strategy than Wells Fargo did. In Wells Fargo’s mini-branch, transactions are handled through self-service video tellers. This isn’t the personal experience BMO wanted to create. Just because BMO was going to shrink its footprint didn’t mean they wanted to shrink the service too. So Dilda’s team made the very conscious decision to keep the human element in the transactional process. 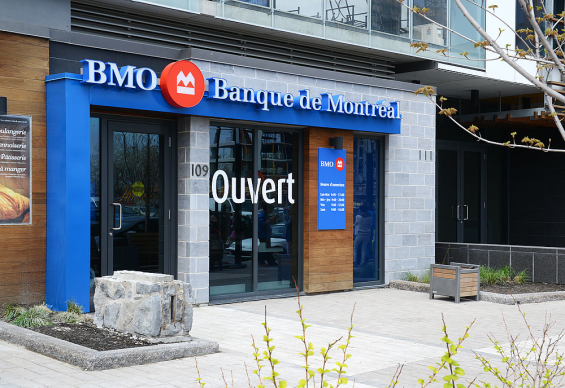 See More: Branch Showcase: 12 Concept Designs From Around The World

For now, Dilda said BMO is not committed to a wider deployment of the nanobranch strategy. Dilda will consider expansion of the studio branch concept into additional urban markets in North America, including Toronto and Chicago (through BMO Harris), pending an evaluation of the beta location’s performance. Customers’ reaction and feedback will also play a factor in future plans for the studio branch.

The studio branch model is being test-marketed in Quebec where BMO has made significant investments in recent years, including the opening of six new branches in 2012. In fact, the latest studio branch is only a few blocks away from a significantly larger and much more traditional BMO branch.

The branch opens at 9 am six days a week. It closes at 5 pm on Monday, Tuesday and Friday, 8 pm Wednesday and Thursday, and 4 pm Saturday.

Where is the nanobranch headed next? Will we someday see locations staffed by only one person in a secure booth — essentially an ATM with a human in it? Some financial institution may do it soon, if they haven’t already. And if we get to that point, you have to wonder, “Why not remove the human element and just use video tellers instead?” And the next logical step is to remove the ATM — remote video banking.

It is very likely that someday, nearly every single banking need consumers have can be addressed through the online channel. Sales and service requests could be managed through remote video conferencing over the internet using either a desktop, mobile or tablet device. And transactional needs can be managed through web-based banking tools.

It is entirely possible to disintermediate branches from the banking supply chain. But it’s going to take a long time, because many things have to happen first. To eliminate branches, we need to get rid of banking’s physical instruments — cash, coins, checks, physical signatures, etc. And before consumers will feel comfortable discussing all their most sensitive financial matters with someone online via a video chat, many big brands in many other industries will have to pave the way first. People barely trust online banking, and still have serious questions about the security of mobile banking. It may take a generation or two or three before consumers feel comfortable fully embracing the digital channel. Until then, they will keep at least one foot in the real world, tethered to the comfort and security of the brick-and-mortar channel.