You might think that bank robberies would be on the climb during The Great Recession. But so far, that hasn’t been case. Using official FBI data, The Financial Brand looked at bank robbery statistics for the 47,242 robberies of U.S. financial institutions that occurred between 2003 and 2009. The study showed that even though Americans are reeling from one of the worst economic periods in the country’s history, bank robberies are actually on the decline.

Every year, there are between 5,000 and 6,000 commercial banks robbed, compared with fewer than 500 credit union robberies. Commercial banks are the most common target, representing 88.8% of all robberies.

Demand notes are used in 56.7% of robberies. Robbers threaten to have a weapon 45% of the time. When a weapon is used, handguns are the most common. Slightly more than one in four robbers reveal their handgun. A mere 3% threaten to possess a bomb or other explosive device.

Robbers have not gotten much smarter over the years. Despite harsher penalties for using a firearm in the commission of a felony, the same percentage of robbers use guns today as they did seven years ago.

Contrary to popular belief, the risk of robbery does not increase significantly on Fridays. A financial institution is no more than 4% more likely to be robbed on a Friday vs. any other weekday. The risk is only three times greater for a robbery on a Friday than on a Saturday. An alarming 7% of robberies occur on Saturdays, which is quite surprising considering the shorter branch hours and fewer number of branches that are open.

2009 was the first year the FBI started tracking takeovers as a method of robbery. In 2009, there were 306 takeovers, representing only 0.6% of all robberies.

The perpetrator of a robbery is predominantly male. In 2009, the ratio of male to female robbers was 16:1. 41% of perpetrators are white, 46% black, 8% Hispanic and 5% from other ethnicities.

Out of over 47,000 robberies in the last 7 years, only 9 employees and customers were killed.

Between 2003 and 2009, a total of 136 people have been killed in the course of financial institution robberies, 108 of them were perpetrators (79%). In those seven years, a total of 28 people other than perpetrators were killed, only 9 of which were employees or customers.

In 2009, all 21/21 of the people killed in the commission of a robbery were perpetrators. It’s quite likely that 2009 was the first year in U.S. history where no one other than perpetrators were killed during a robbery. 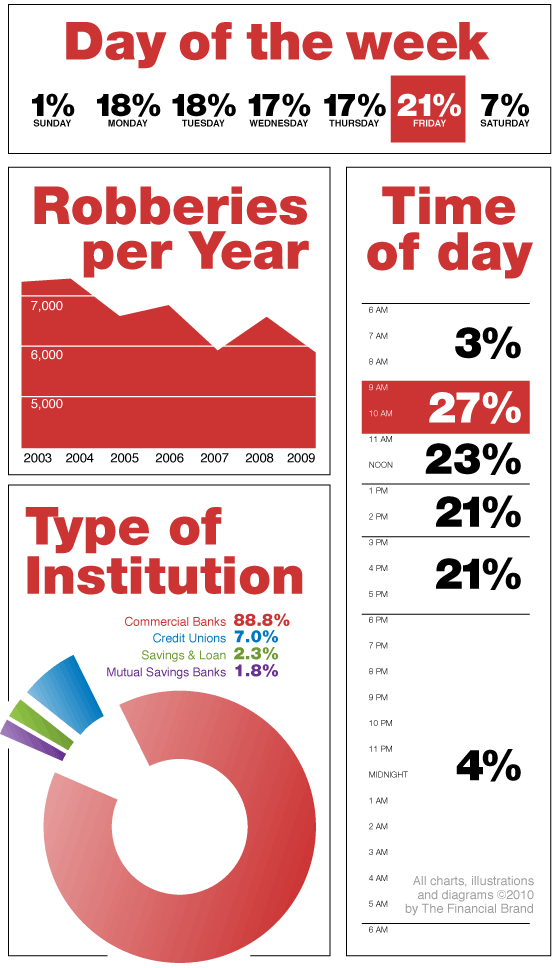