Subscribe Now Get The Financial Brand's FREE Email Newsletter
Many financial institutions are completely missing the mark for what customers want from their local branches. The solutions aren't far away, however. A group of branch strategy and design experts tackle what a state-of-the-art branch needs to have.

Traditional financial institutions can’t (or don’t want to) close all their branches for good, even given the recent shift to digital banking. There’s a personal characteristic inherent in a financial institution’s branches that people still want that can’t be matched in a digital-only ecosystem.

The early impact of Covid-19 was a body blow to the branch channel, of course, forcing institutions to shutter their doors temporarily. And this situation — combined with an intense shift to mobile and online banking technology — motivated some financial institutions to think about shifting away from a branch-focused strategy.

However, consumers and small businesses still value their branches. Some even say that they plan to visit their branch more than 40 times this year, according to a report from EPAM Systems. So it’s crucial that financial institutions, even in today’s digital world, still prioritize their branches and re-evaluate their design.

“Financial institutions no longer have the luxury of renovating one branch at a time over a long period.”
— Jim Caliendo, PWCampbell

The Financial Brand reached out to executives from four branch design firms to find out more about what the modern bank branch needs to have to survive, and what it can eventually phase out.

Nate Baldasaro, Co-Founder at The Element Group — a New Hampshire-based firm that designs and renovates bank and credit union branches — says, for example, that downsizing branch spaces can be a crucial step in redesigning the bank or credit union branch.

“Most bankers are not designers, and most of them have a hard time envisioning that you can accomplish all of what they need to accomplish in 2,000 or 1,500 square feet, and still provide great service,” Baldasaro explains.

Likewise, Kevin Blair, CEO of St. Louis-based NewGround, says the “new normal” should pivot around a “greater focus on complex sales and service and further automation of transactions,” an experience which Blair believes can be easily achieved by a smaller footprint facility that utilizes a universal banking platform.

Jim Caliendo, CEO of PWCampbell — based in Pittsburg, Pa. — succinctly states the urgent need to revamp branches to match the modern world:

“80% of bank branches are over 30 years old,” he points out. “Financial institutions no longer have the luxury of renovating one branch at a time over a long period.”

“Technology finds application throughout the branch, in self-service, assisted service, and employee support roles,” the team stated in an email. “It is crucial that the technology work ‘as advertised’ and that any rollout of something new be supported by advance communication and training to avoid embarrassing and potentially fatal lapses in service or perceived competence.”

Cut the Branch In Half

One of the key points on which all four firms agree is that banks and credit unions can now operate with much less branch space. Baldasaro, for one, says that most of his clients have branches of about 2,400 square feet, although they have gone as small as 500 to 1,300 feet. Likewise, Caliendo says the maximum square footage of a branch should be no more than 2,500 square feet.

For comparison, a Chase Bank representative told the Philadelphia Business Journal the bank’s typical branch size is between 2,800 and 3,200 square feet.

“Any physical barrier that hinders face-to-face interaction needs to be removed to produce a more collaborative environment,” Caliendo adds.

Most banks and credit unions can easily consolidate the front- and back-office segments of the branch. Caliendo even suggests that there is “no longer a need for vaults, safety deposit boxes or traditional teller lines, “given shifts in customer branch usage.”

Blair goes on to point out that vaults and safety deposit boxes are often very expensive, especially given the size of the rooms they require. People don’t look to the bank anymore to store their values. Instead, “modern consumers have home safes and fireproof file storage for personal records and valuables,” Blair continues. He says that less than 10% of the branches he’s helped design have spaces set aside for safety deposit boxes.

Alternatively, what financial institutions should be doing is opening up the branch to make it more collaborative for both customers and employees.

Baldasaro says that, in many instances, he suggests bankers designate resources for one or two offices and spend more on providing employees with a break room that suits their needs.

“The break room, or kitchen, should be upgraded to a much nicer environment today,” Baldasaro insists. “Banks and credit unions are all battling for employees, especially now. You might find that adding a nice little, in-house coffee shop isn’t that big of a deal.” 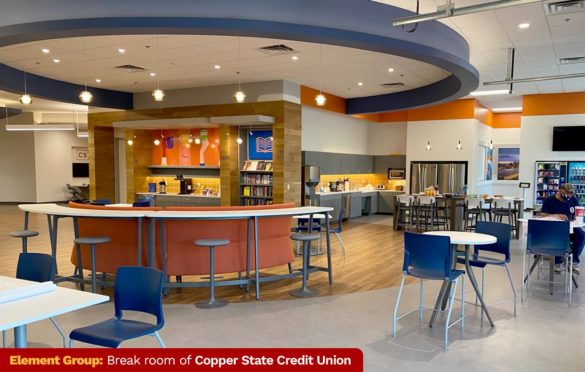 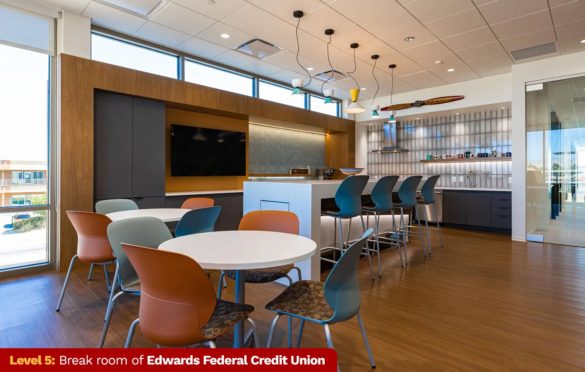 Caliendo agrees. Given the need to get employees working in the office, it’s imperative that financial institutions really dig deep into what their workforce needs. He maintains that “today’s generations place more importance on wellness initiatives, collaborative areas and open air spaces. Overall they want more relaxing and inviting spaces that mirror their home life.”

In addition to break rooms and safe spaces for branch employees, Baldasaro says that there should be “offstage” areas for when bankers need to make calls to check-in with customers.

These spaces can exist in the front-facing part of the branch — not just hidden in the back of the building. Level5’s team maintains that the modern customer service office is is becoming far less formal and traditional. 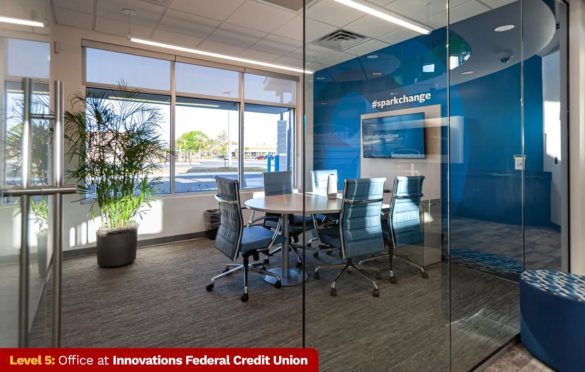 Often thought of in connection with digital banking, technology is also crucial in the branch. For starters, Level 5’s team and NewGround’s Blair both agree that there isn’t necessarily a single strategy that financial institutions can manifest into reality. Instead, banks and credit unions must get comfortable using customer data to learn about what people need or want more of.

The degree of technology used will vary location by location in alignment with the needs of the consumers at that location, Blair explains, but overall there are several applications that banks and credit unions should start building into their branches, if they haven’t already:

Baldasaro is a huge fan of the opportunities that video offers, noting that banks and credit unions can easily have mortgage experts and other professionals readily available at a branch through the use of videoconferencing technology.

“The idea is nowadays you can’t let a client leave and walk across the street to another institution,” Baldasaro explains, noting that people don’t want to wait to speak to a specialist if they’ve come into a branch. Video is a great alternative for a bank or credit union can’t afford to keep experts at each branch — which is most of them.

He predicts video in banking will be a big deal over the next couple of years.

Level5’s team adds that “video banking can be incredibly useful as a way to offer certain functions at remote locations instead of deploying these functions across an entire branch network.”

By integrating more interactive teller machines and ATMs into branches, financial institutions can have fewer people working in a branch and, those that are, can help customers get accustomed to the newer systems.

ITMs are similar to ATMs but use a live two-way video connection to a banker, often located centrally. “According to the equipment manufacturers, ITMs can do up to 90% of what a human teller can do,” says Level5. “This makes them an effective choice for drive-up installations.”

Baldasaro explains that banks and credit unions should be thinking about how many of these machines they would want per branch, not if. What’s important with this technology however, he argues, is that banking providers feel confident with these systems.

“Most people today are still just putting their toe in the water of technology without really jumping in,” he says. “This hesitation will translate to customers as well.”

Digital signage is another technology that Caliendo finds can help drastically improve the customer experience, along with ITM kiosks, employee iPads and videoconferencing. Level5’s team maintains that digital signage definitely deserves “a nod” to its efficiency, as it is a key “way to automate in-branch marketing messages.”

“Dynamic and touch screens offer a real-time way to push messages that are timely (and accurate), while giving customers a way to explore products and services on their own,” the team reports.

The specialists The Financial Brand spoke to had different perspectives on designing an employee game plan. Some suggest that the traditional teller is a dying position and that Apple Store-like specialists are the wave of the future. Others subscribe to the idea that, if a customer is still coming into the branch, they are bypassing all other forms of communication to speak to a teller directly. 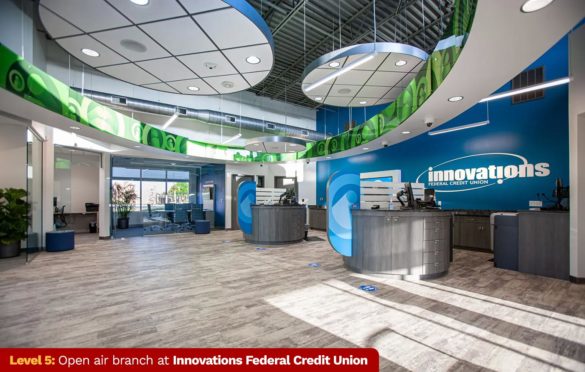 NewGround’s Blair goes so far as to say that “teller lines and pods are dead” and they are getting replaced by “concierge service center counters where the universal bankers can conduct whatever needs the consumers have.”

Citibank takes this approach in some of its branches. The megabank created a “Banking Concierge” position situated near the front of the branch to connect with people when they first walk through the door and direct them to a specialist who can help, according to Worldwide Business Research. 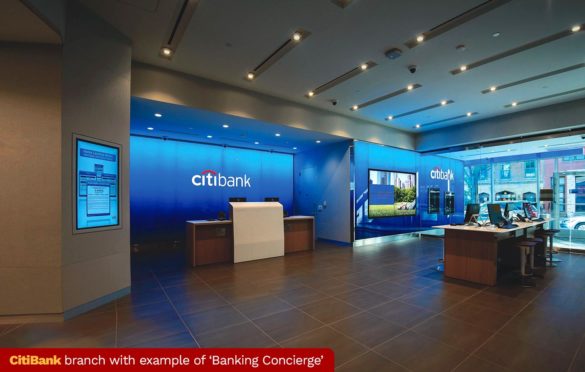 On the other hand, Caliendo at PWCampbell argues that using pods, “instead of teller lines — along with open areas for education, problem solving, and consultation — can aid branch staff in strengthening customer relationships.”

The one thing all the experts agree on is that the teller line as it used to look is fading and that financial institutions ought to rethink their frontward-facing employee structure, regardless of which method in particular will work best.

“We may have less people in the branch, but they’re going to be much better trained. Hopefully they’ll make more money, but part of their job is to find — when someone comes through the door — what they are there for. What can we help you with?” Baldasaro says.

Blair even suggests that banks and credit unions rethink who they hire as frontward-facing employees.

“They should look at the retail and hospitality industries for dynamic employees that understand exceptional customer service. It’s much easier to teach an individual that is a great retailer to be an exceptional banker than it is to teach a traditional banker to be a retailer,” Blair says.