Subscribe Now Get The Financial Brand's FREE Email Newsletter
The pace of branch closures accelerates as financial institutions seek to manage delivery costs. But these reductions must be made in context with digital delivery strategies to create the best omnichannel experience for differentiation on a local and institution-wide basis. New research indicates this process is underway, but still evolving.

The reduction of branch-based banking is accelerating as the shift to digital banking continues in a post-pandemic world. In the latest Digital Banking Report survey, 66% of bankers globally agreed that branch locations will decrease by 20% by 2025, with 77% saying that three-quarters of new accounts will be opened using digital channels by 2025. This is aligned with research done by the Economist Intelligence Unit (EIU) that found that just under two-thirds (65%) of banking executives believed that the branch-based model will be “dead” within five years.

Insights were collected by the Digital Banking Report to determine how financial institutions are working to reposition physical branches within the larger context of omnichannel delivery. We found that the shift to digital transactions, and continued pressure from digital-only competitors, has led financial institutions to reimagine business models around product and service delivery.

While some institutions are simply shrinking branch networks to improve efficiencies, many are rethinking how existing branches can be leveraged as a competitive enhancement. In either case, timing is of the essence, as non-traditional competitors continue to steal market share and share of mind, especially among younger consumers.

According to banking executives worldwide, the ongoing shift away from branch usage is expected to continue. Almost two-thirds of financial institutions believed the greatest channel shift in the next three years will be from branch use to mobile banking. Significantly fewer believed that consumers would move to contact centers, online banking, or to remote advisors. 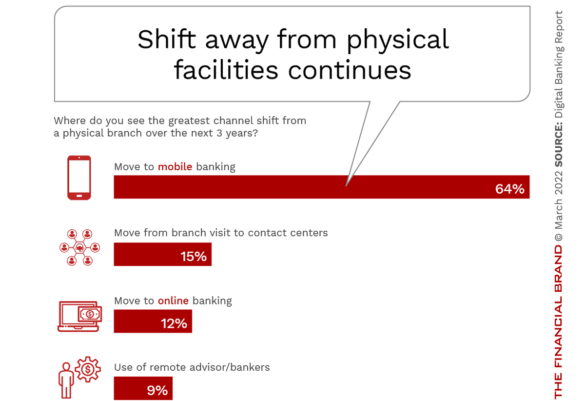 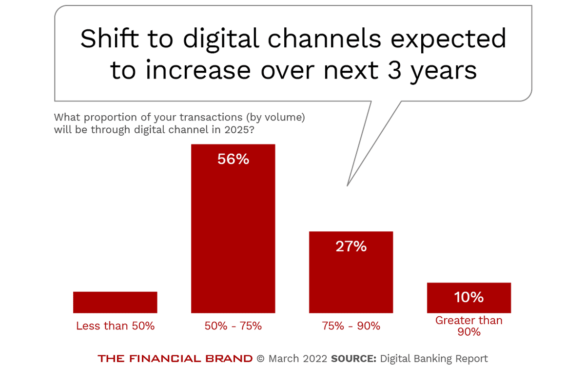 For decades, traditional banks and credit unions have sought to reduce the costs of service delivery. From the introduction of ATMs, to the shift to online and mobile banking, the primary mission has always been to drive internal costs down. The reality was that these shifts to alternative channels had a greater impact on diversity of channels used as opposed to delivering significant cost savings. In the vast majority of instances, the efficiencies never approached the cost structure of digital-first fintech organizations. Worse yet, most new digital delivery alternatives were not built with a strong user experience in mind.

The banking industry moved quickly from digital supporting branch-based relationships to branches being a support channel for digital banking consumers.

Today, delivering a stronger customer experience and supporting omnichannel integration has increased as a top priority of banking organizations globally. While there is still a very strong emphasis on reducing the number and footprint of existing branch locations for efficiencies, there is also the desire to support digital engagement in physical locations (and visa versa). Almost two-thirds of organizations surveyed stated that their number of branches would be reduced in the next three years (by 2025), with 7% increasing their branch network and the rest (28%) expecting no change. 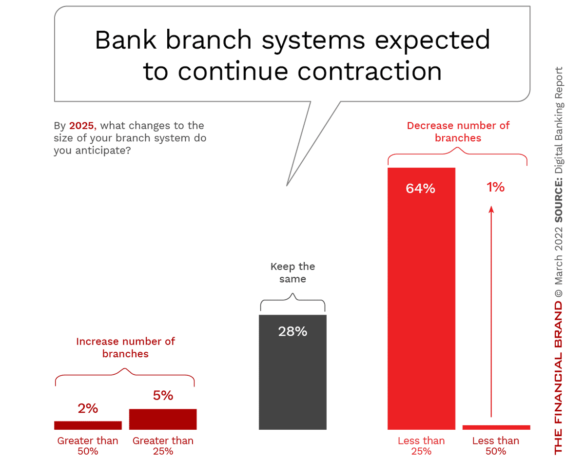 When asked about the primary drivers of change in the future development of branch strategy, financial institution executives ranked the desire for improved efficiency and the importance of an improved experience almost equally. Developing a successful branch strategy will require finding a balance between supporting digital customers with new technology options, and providing branch customers with digital options and enhanced human consultation capabilities.

It will not be a one-size-fits-all strategy for all institutions or for all markets within an institution. Each organization needs to evaluate their existing and desired customer base as well as the potential for community-level differentiation. 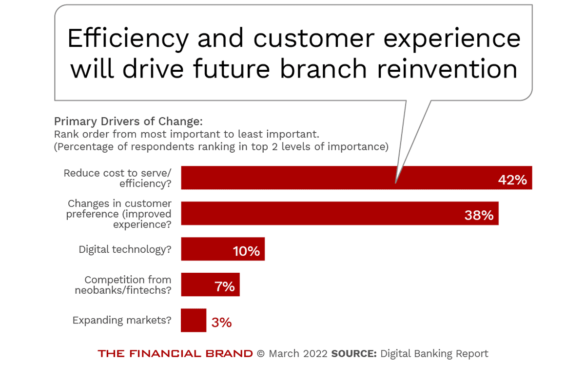 According to a JD Power study, “The most satisfied retail banking customers use both branch and digital services to conduct their personal banking, while the least satisfied are those who have a digital-only relationship with their bank and do not use branches.”

Despite the increased evidence of branch network contraction, branches still play a role for customers in every demographic segment. Not only are some complex engagements easier to complete at an ATM, a teller, or branch officer, some people make brand decisions based on local branch availability. The key is to avoid ‘forcing’ the customer to a specific channel based on shortfalls of the organization (bad digital user experiences, etc.).

In an environment where a consumer can perform almost all banking transactions without a branch, financial institutions are no longer seeing ‘accessibility’ as a primary differentiator in the marketplace. In our research, financial institution executives stated that the ability to ‘bank on your terms’ was the brand differentiation being sought along with ‘making banking easier’. The survey results also indicated a potential opportunity gap in the ability to use the branch as a source of advice and serving more complex needs. 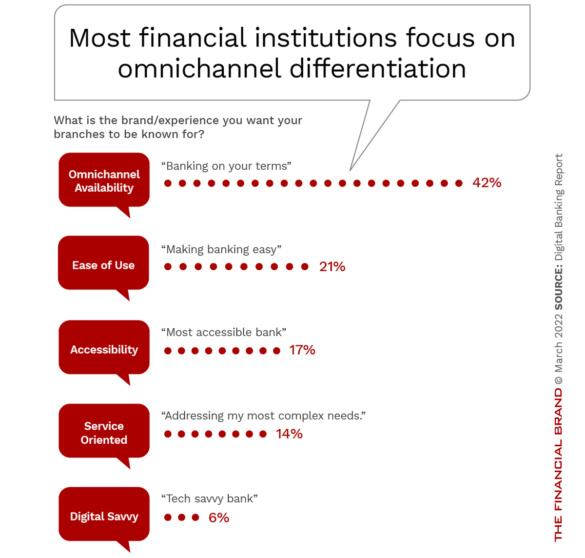 Our research found that, while financial institutions are trying to transform their overall delivery strategies, the focus for branches continues to be on serving existing customers as opposed to using physical delivery as an acquisition tool. This correlates with other research that indicates the desire for many organizations to use digital as an acquisition tool beyond current geographic footprints. 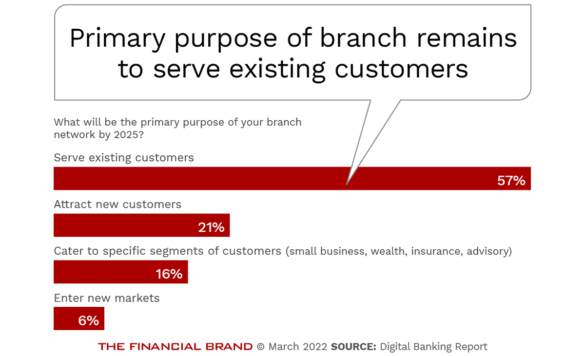 Even before the pandemic made going to a bank branch an avoidable visit, the role of the bank branch had started to transform. Consumers became more comfortable with digital transactions as financial institutions improved the actual experiences, making them faster, easier and more user-centric. The challenge was to move beyond digital banking transactions to digital banking experiences.

At the same time, bankers have needed to rethink the purpose of the branch and determine how a branch can provide a valuable extension of the digital experience. It was a move from branch-first to digital-first engagement.

Our research found that financial executives believe the branch of the future will remain a transaction hub, with a much greater emphasis on advisory services. Given the brand definition bankers believed branches will be known for (above chart), there appears to be a lack of confidence in being able to deliver advisory services on a high level in the next three years. 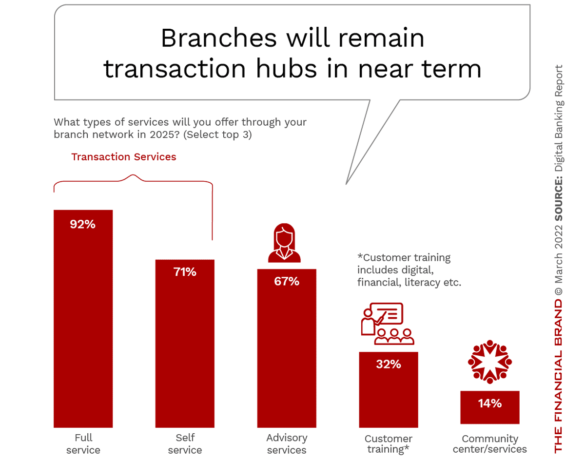 To address the gap between what financial institutions want to offer and what they currently offer, financial institutions indicated a strong desire to invest in the development of universal bankers and the growth in the ability to provide high-level financial advice. There is even the desire to use the branch as a training hub for customers to better understand digital options. 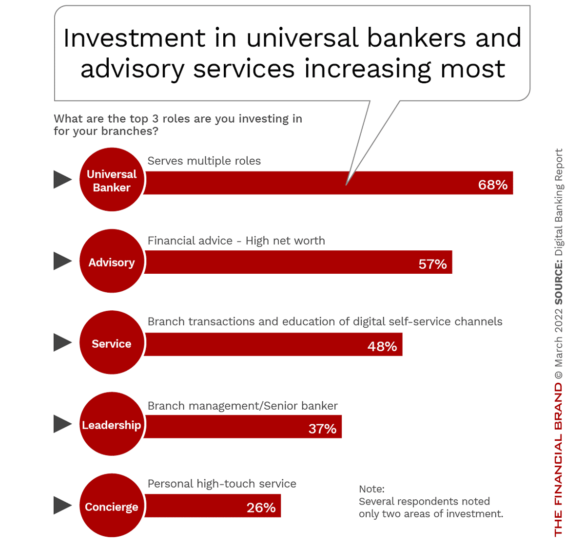 In the future, the customer experience will be maximized if all transactions and engagements can be delivered on the channel of the customer’s choice, whether it be in a branch, on a mobile device, using a call center, or most importantly, seamlessly delivered across multiple channels. Financial institutions must avoid trying to determine the right channel strategy for type of engagement and instead deliver an exceptional experience where, when and how a customer desires..