An article in the Economist points out the decline in the number of bank branches:

“Since the financial crisis, banks have closed over 10,000 branches, an average of three a day. In the first half of 2017 alone, a net 869 brick-and-mortar entities shut their doors.”

But the total numbers don’t get under the covers of at least one important trend: Large institutions have acquired other banks, and closed many of the superfluous branches that were right next door to their existing branches.

If you’re a fintech-loving branchophobe (like me), you conveniently ignore that explanation and attribute the decline to the impact of fintech. 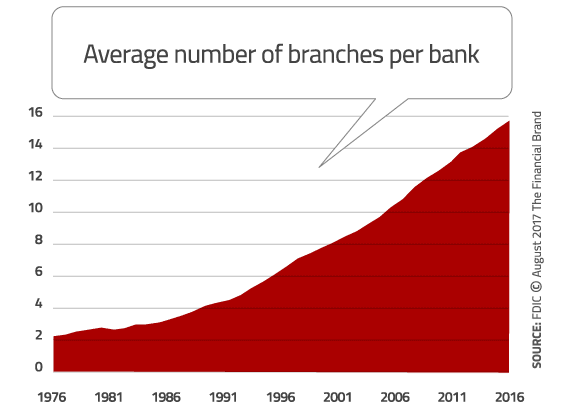 The Economist article went on to point out:

“By 2009, America had 35 branches for every 100,000 adults. Since then, however, ultra-low interest rates and thickets of new regulations have squeezed bank profits. They have responded by trimming branches from a peak of about 100,000 to roughly 90,000.”

What the article didn’t mention, however, is that the “trimming” reduced the number of bank branches per 100k adults to where it was pre-crisis, and in fact, that number increased between 2014 and 2015. 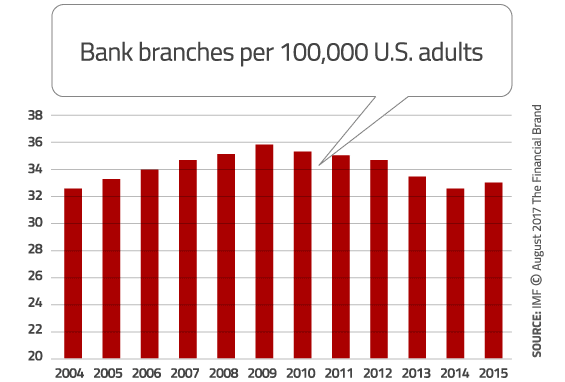 Read More: Will Branches Ever Die?

I don’t know which it is — the data tells two different stories. On one hand, there’s data from Salesforce that shows that consumers of all ages prefer digital channels to the branch, and in fact, the percentage that prefers the branch is a minority, and doesn’t vary all that much for consumers over the age of 35 (the top line represents online, the red line is branch, and the dark gray bar is mobile). 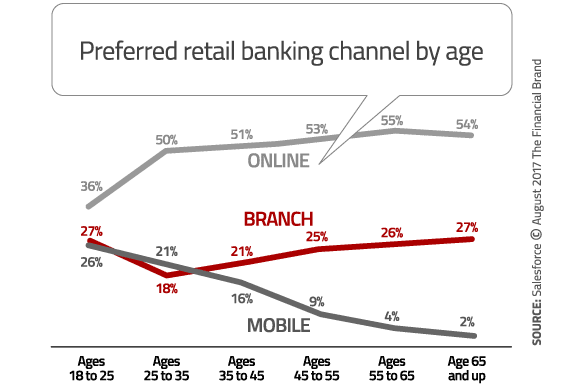 I’m not sure how to reconcile the Salesforce data with findings from a recent Fiserv study, however, which found that 44% of consumers prefer to do their “standard daily transactions” at a traditional branch with tellers. I find this really hard to believe.

Read More: Do Banks Need Branches in the Digital Age?

Another common narrative is that the size of bank branches is shrinking. One CNBC article claimed in its title that “Bank branches are evolving…and shrinking,” and that’s just one of many articles making that claim.