Subscribe Now Get The Financial Brand's FREE Email Newsletter
Alleged aggressive cross-selling targets and employee responses to those goals have come under fire in federal regulator's court filing. Meanwhile the bank says the problem was limited, that it fixed things years ago, and that account sales quotas aren't used there anymore.

The Consumer Financial Protection Bureau sued Fifth Third Bank, N.A., on March 9, 2020, over allegations that some of the top 25 institution’s employees engaged in a series of illicit account-opening practices involving deposit, credit card and online banking accounts. Fifth Third countered the filing of the suit almost immediately with a statement backed by seven pages of detailed rebuttals and with the declaration that it will press for an early trial.

The filing came in the wake of Wells Fargo’s final $3 billion settlement with regulators over employee sales practices, announced in February 2020, and only a day before the House Financial Services Committee held yet another set of hearings concerning the Wells situation. The Wells case involved millions of consumers, but CFPB mentions no numbers in its Fifth Third filing. The bank, meanwhile, maintains that it found 1,100 cases that needed to be addressed, and did so.

Financial institutions’ sales practices have been under increased scrutiny since the first revelations surfaced in 2016 about fake and fraudulent sales of products by Wells Fargo employees, done in an effort to meet increasingly stringent sales goals. CFPB’s filing charges Fifth Third with violations of Truth in Lending and Truth in Savings laws, as well as rules against unfair and abusive acts or practices.

A good deal of the language in the bureau’s initial complaint filed in the U.S. District Court in the Northern District of Illinois echoes points made about Wells Fargo in multiple investigations and settlements over the years. There is almost a sense of déjà vu in reading the bureau’s court papers in its terminology.

The complaint broadly takes aim at alleged actions by employees in connection with a cross-selling program.

“Fifth Third conditioned employee-performance ratings and, in some instances, continued employment on whether managers and their subordinate employees met ambitious sales goals,” the complaint states. “Fifth Third also used an incentive-compensation program that rewarded managers and their subordinate employees for selling new products and services to existing customers.”

“CFPB charges that in pursuit of quotas, employees began opening deposit accounts that hadn’t been authorized by consumers.”

“The bureau further alleges that, despite knowing since at least 2008 that employees were opening unauthorized consumer-financial accounts, Fifth Third took insufficient steps to detect and stop the conduct and to identify and remediate harmed consumers,” CFPB said in a statement.

The bureau charges that in pursuit of quotas, employees began opening deposit accounts that hadn’t been authorized by consumers, using money transferred from those consumers’ other accounts at the bank to temporarily fund the accounts. The suit also alleges that phony credit card accounts were opened in consumers’ names and that they enrolled consumers in both the bank’s online banking services as well as in Early Access, a fee-based line of credit created to allow use of funds before they are deposited. 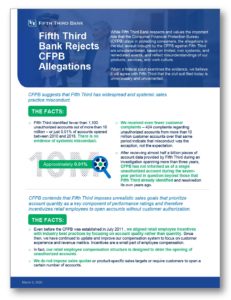 The bureau suit seeks a halt to the alleged practices; payment of damages, restitution and other monetary relief to consumers affected; and imposition of civil money penalties. No numbers are specified for these in the complaint.

Fifth Third’s Susan Zaunbrecher, Chief Legal Officer, stated that the bank “is confident it has treated customers fairly. When a federal court examines the evidence, we believe it will agree with Fifth Third that this is a limited and historical event.”

She also stated that “the civil suit filed today is unnecessary and unwarranted. The bank will defend itself vigorously and is confident in the outcome.”

The bank issued two documents that respond in some detail to the charges set forth in the bureau’s complaint. They are laid out more like marketing documents than formal statements (see above). One is a response to the lawsuit headlined, “Fifth Third Bank Rejects CFPB Allegations,” and the other is a FAQ regarding the case. They are reminiscent of infographics issued by TCF Bank in 2017 when it fought CFPB concerning its overdraft checking program. TCF settled the suit for $25 million in restitution and $5 million in civil money penalties in 2018.

Reviewing Some Specific Points in the Case

In spite of the charge that Fifth Third employees committed “widespread and systemic sales practice misconduct,” the bank counters that its own investigation found transgressions were quite limited.

“Fifth Third identified fewer than 1,100 unauthorized accounts out of more than 10 million … There is no evidence of systemic misconduct.”

“Fifth Third identified fewer than 1,100 unauthorized accounts out of more than 10 million — or just 0.01% of accounts opened between 2010 and 2016,” the bank stated. “There is no evidence of systemic misconduct.” The statement refuting the charges also said that the bank received 424 complaints regarding unauthorized accounts out of a customer base of over 10 million consumer accounts — a tiny percentage of the whole. The bank said that it identified $30,000 in improper charges to consumers and waived or reimbursed them prior to CFPB starting its investigation.

“After reviewing almost half a billion pieces of account data provided by Fifth Third during an investigation spanning more than three years, CFPB has not informed us of a single unauthorized account during the seven-year period in question beyond those that Fifth Third already identified and resolved on its own years ago.”

Fifth Third also states that its sales programs are chiefly quality based, not quantity based, and that account openings have not been a factor in compensation levels since 2018. Also: “We do not impose sales quotas or product-specific sales targets or require customers to open a certain number of accounts.”

The bank also stated that between 2010 and 2016, 96 employees were terminated or resigned for opening accounts that the bank considered to be suspicious in origin or which failed to meet internal standards for quality and usage.

Fifth Third also noted that since 2016 it has sent an email to any customer for whom an account has been opened and that it calls customers who have not activated new credit cards.