Subscribe Now Get The Financial Brand's FREE Email Newsletter
The number of banks that still do not have a formal onboarding process for customers opening new accounts is surprising. Given the amount of trade press, webinars, white papers and research done on the value of onboarding, virtually every bank should be communicating with customers aggressively during the instrumental 90 days after account opening.

According to the J.D. Power and Associates 2011 U.S. Retail Banking Satisfaction Study, one of the most powerful ways to unlock customer value is to build a multi-channel, multi-touch onboarding process that begins at the new account desk with needs identification and extends to a post-sale communication sequence that builds engagement and share of wallet.

In a presentation at the Retail Financial Services Symposium in Miami, J. Michael Beird from J.D. Power and Jean Lubbert from BBVA Compass shared that a strong onboarding process is needed in response to the ‘perfect storm’ of challenges facing banks including:

The best onboarding practices shared reinforced results of the same study done in 2009 and 2010, where it was shown that both satisfaction and sales increased with relatively rudimentary steps such as a thorough needs identification, a timely post-sales follow-up, and a series of communications that emphasize early product engagement. In fact, the studies even showed that satisfaction and sales increased with each subsequent contact in the first 60 days up to seven touches.

The good news is that, compared to last year’s report, each step in the onboarding process is being done more frequently than in the past. Unfortunately, only 64% of households surveyed indicated that there was any follow-up done (vs. 61% in 2010), with only 17% of the households saying that any contact was made within 2 days.

So, given the potential positive impact on retention, engagement, sales and customer satisfaction, what are the key components of building a business case for onboarding?

While first year attrition at banks across the country usually range from 20% to 40% (dependent on aggressiveness of a bank’s acquisition efforts), a conservative benchmark for first year reduction of attrition is between 2-3% assuming a multi-touch onboarding process. While that may not seem like a significant movement from norm, the cost of this attrition is significant. 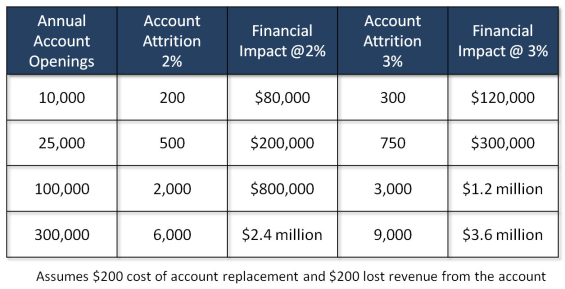 In the example above, I provide a very simple calculation using different annual account opening levels, different attrition rates and the financial impact of $400 for each account lost. I use a $400 cost of lost account based on a $200 replace cost for the lost customer (very conservative) and an additional $200 in annualized revenue potential lost due to attrition.

Moving beyond retention, a well constructed onboarding program also has a positive impact on the level of account engagement compared to control groups. For most banks, engagement includes the cross-sell of direct deposit, online banking, bill pay, the active utilization of the debit card and in some cases mobile banking and reward program enrollment. 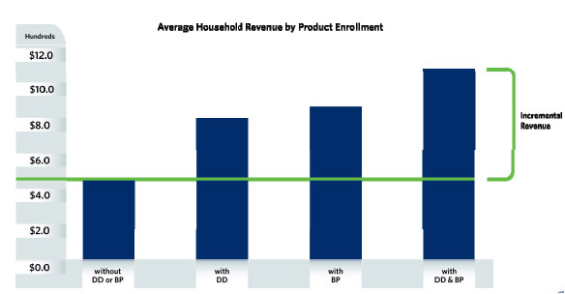 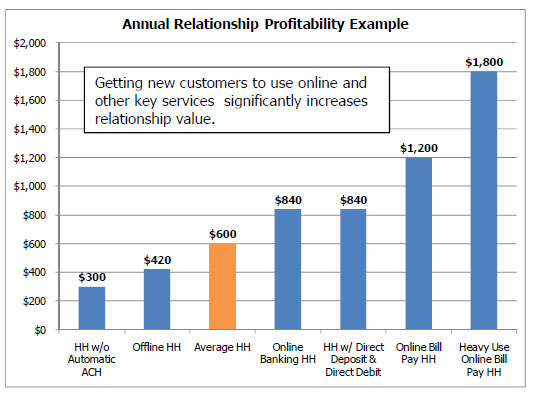 Finally, onboarding definitely has a positive impact on average account ownership and share of wallet as illustrated by the 2009-2011 J.D. Power and Associates studies. In my experience, however, the financial impact on cross-sell effectiveness is the most disputed within banks where an onboarding program is implemented due to factors including an inability to set aside a control group large enough to measure product level results and the desire by many banks to focus on new account engagement as opposed to cross-selling during the first 30-120 days of the relationship.

The critical nature of the first 90 days of a relationship has been known to the financial services industry for years but internal obstacles and a lack of focus on organic growth has limited deployment of this foundational program. Today, as the cost of new customer acquisition continues to escalate and the need for revenue replacement increases, the most successful banks are discovering ways to implement and enhance onboarding programs using multiple channels and customer touches. The result is improved retention, increased engagement, accelerated cross-selling, an improved customer experience and optimized customer lifetime value.

Successful onboarding can quickly cover the both the cost of new customer acquisition and the deployment of a robust onboarding program in a very short period. Instead of having a period right after account opening where nobody from the bank communicates with the new customer, you can reach household profitability faster and achieve a quicker return on investment.